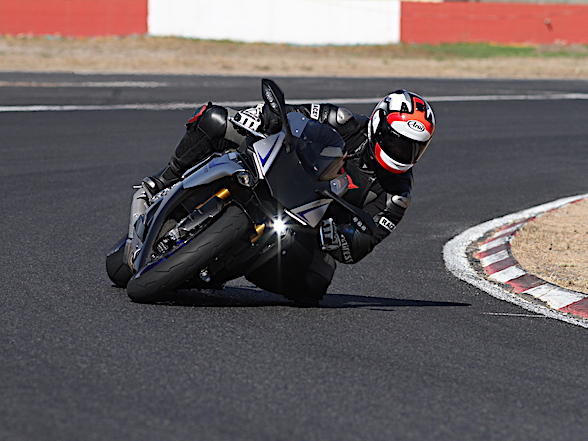 Story: Donovan Fourie
For the first time in my life, I am happy to be in B-mode.

This is a strange revelation from somebody who has always thought these rider mode jobbies to be nothing but marketing nonsense tricking people into buying something that can easily be achieved through the correct usage of the right wrist. For every bike we have owned, or spent a lengthy period of time with, that has had these mode things, the first thing we do is slap it into A-mode, or the equivalent, and enjoy unhindered power and acceleration. 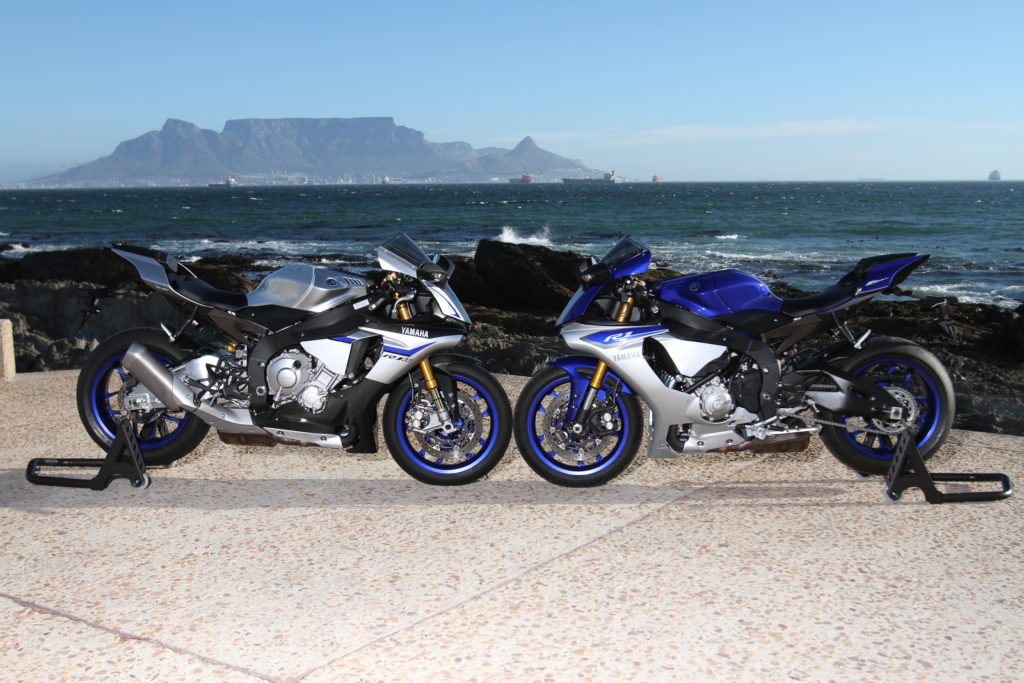 On the R1, the brake and turn part are well catered for. The R1 has something called unified brakes. It makes use of its six-way Inertia Measurement Unit, a first on any production motorcycle, and I’m not entirely sure how it works either, but we are told it measures the usual forward/backward, sideways and up/down axis, but also takes into account roll, pitch and yaw, which is something new in the street bike world.

While other manufacturers make use of electronics from the likes of Bosch and Magneti Marelli, Yamaha has used their own, which sounds idiotic when there are experts who do this full time, yet Yamaha have something called a MotoGP project, where people like Valentino Rossi and Jorge Lorenzo tell them what works or not, and they have been doing this for some time, thus are pretty good at it. Because of all this, it can do clever things, like 125 calculations per second.

So the unified brakes are different to the more commonly-known Combined ABS, because while pulling the front brake lever will activate the back brakes also, the computer allows the two brakes to work independently of each other. So, in a straight line, both brakes will be working hard, but as you trailbrake into the corner, it will gradually release the back brake while keeping pressure on the front. This is a glorious new innovation, because the back brake will help a bike turn by pulling it into the lean, yet too much back brake causes the back wheel to skid, which could be somewhat detrimental to the art of staying on. The problem is that our clumsy feet are unable to determine that fine balance between helpful and death, making this little electronic control all the more important.

The R1 weighs 199kg, with a full tank of fuel and an engine full of oil, which is fantastic. This, with the unified brakes, mean that slowing down and turning is handled with nothing but conformity from the bike, which is always a joy. 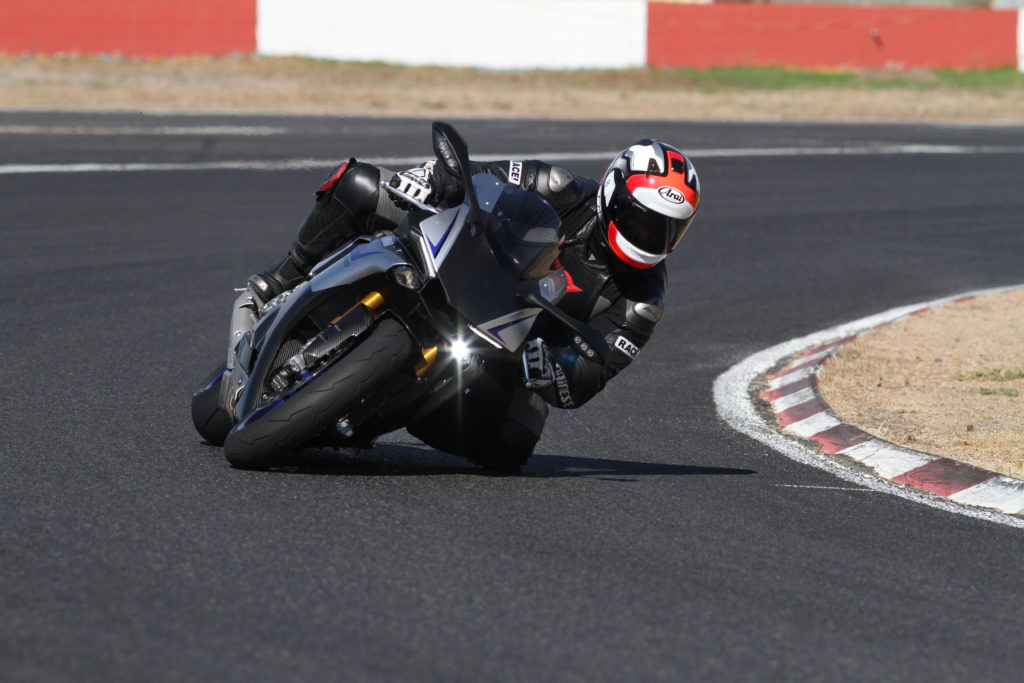 R1 in the bends

In the corner, it holds a line as all modern superbikes do. The M version has electronic Ohins suspension, plus GPS sensors and data logging and more carbon fibre and things. The only difference on the track is that the M version does everything a little bit better. It feels more plush, more confident and more capable. Yet, to be honest, the standard R1 is far from terrible. In fact, only the top A class riders at a track day will feel a discernible difference between the two, and a racer will definitely push harder, but road riders or B class and below track riders really need not bother, which is lucky, because there are really not many of the M versions coming to South Africa, and the price is R340,000, this when the price of the standard bike is already R230,000.

Then things get back to the flat out part. This is where it get tricky. B-mode, on the four-way rider mode functions, is somewhat mild and timid when you first open the throttle, which is helpful when you are leant over attempting to drag your face on the floor. The B-mode helps you along, giving you a gentle piece of that four-cylindered, crossplane engine, which is so good while you are leant over because instead of sliding or pushing the front wheel wide, it lets the bike carry on on the course that was intended.

Then you stick it into A-mode, head into the same corner with the same face-dragging intention, rolling on the throttle, and the seven levels of hell with all its devils, demons and ghouls are unleashed, frightening you out of your wits and upsetting the whole apple cart. Thankfully, the electronics are still doing their part. We kept the traction control in level three, two away from its lowest setting and four away from suicidal, and yet never felt it being a hindrance, like traction control normally is. The new R1 also sports slide control, which doesn’t only monitor rear wheel spin, but also how much your back wheel is moving out of line with the front wheel, and adjusting the throttle accordingly. 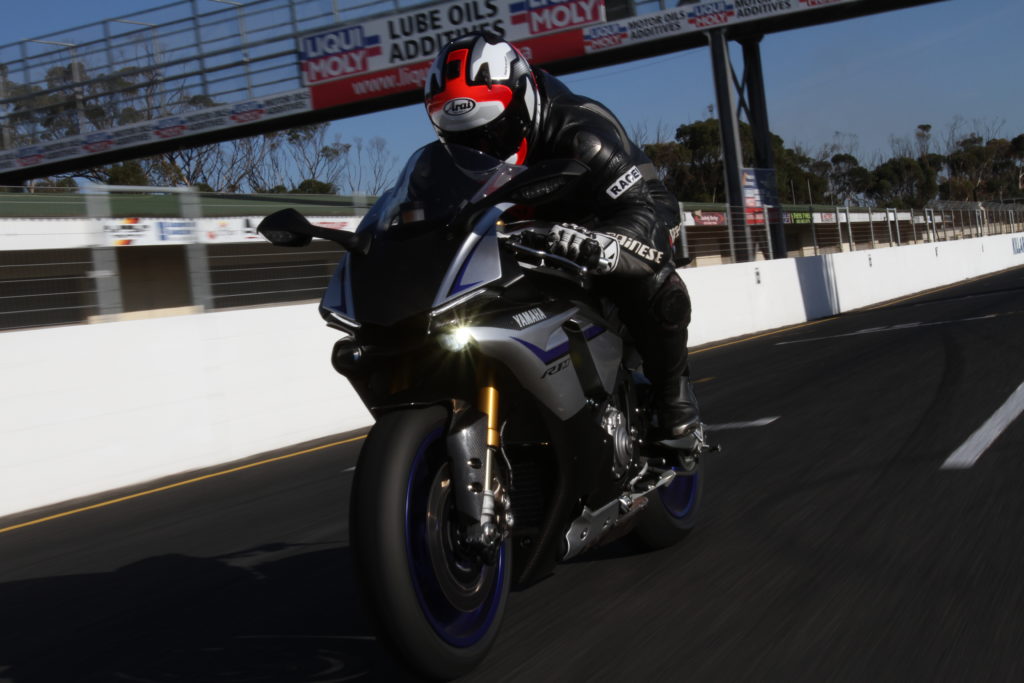 But opening the throttle slightly in the middle of the corner is where your problems only begin, because after the corner comes a straight, where the real flat-outness occurs, and so far 10% of the throttle is ripping both your kidneys out and feeding them to you.

Still, people are watching, thus full throttle must be ventured.

The crossplane engine kicks into full MotoGP mode (really, it sounds just like Rossi’s M1 bike), the front wheel lifts, you slide the back of the seat and your arms extend, and the Killarney straight, which is notorious for being long, suddenly become much shorter.

Honestly, we have ridden many a fast superbike, and are used to being pummelled by acceleration in the straights, but this R1 opens a whole new can of worms. Normally, it’s the corners that tire you out as a rider, but keeping composed while the front wheel buckles and weaves under the thrust is truly exhausting.

This is the first time I have been stiff after a launch, and I’ve been to many.

For the sceptical readers, who feel that any form of compliment in any stories about any bike is nothing more than an insincere attempt to garner advertising or bribery, here is some more scientific evidence of the R1’s brutality – David MacFadden, who has been campaigning in the World Superstock Championship for the past few years, and who is taking part in the British Championship this year, was at the launch, which is confusing because normally he rides a Kawasaki. Also there was the 2014 R1, which he was doing some launch marshalling on.

Down the back straight of Killarney on the 2014 one, which is about a kilometre long, he got as much drive as he could out of the preceding corner, tucked in as much as he could and managed 257km/h before he had to brake for the hairpin at the end.

And what speed do you think the new R1 managed?

This was all recorded by The Bike Show’s onboard cameras. 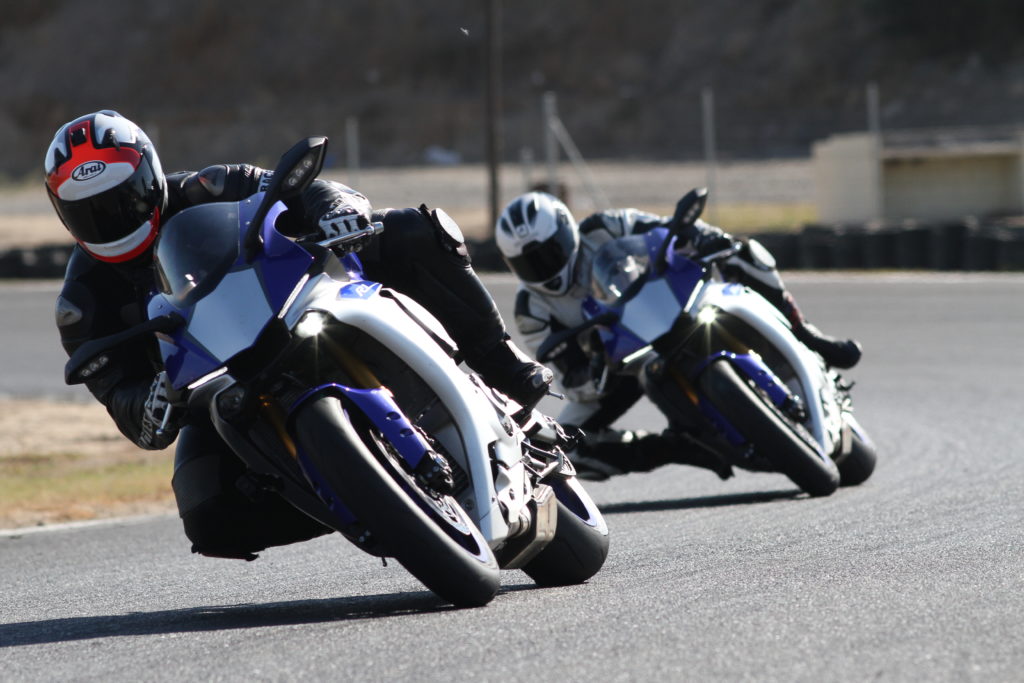 Even during the inordinate acceleration, the electronics were serving their purpose. While the front wheel was attempting to leap into the air and gain flight time, the electronic nanny was on-hand to administer some wooden spoon slaps. Normally, the motor cuts out, the front wheel drops and the person surviving on good old fashioned short shifting flies past.

On the R1, the front lifts half a foot off the ground and the electronics simply keeps it there, while the motor carries on accelerating. Your first reaction is to either shut off or short shift with the aid of the quickshifter, but after taking a courage pill, you keep the throttle open and allow the witchcraft to take place, keeping the bike accelerating while the front wheel just floats like a magic carpet.

The only other time I have felt this amount of wizardry was when we rode Sylvain Barrier’s BMW World Superbike, which had factory racing electronics, and that had exactly the same front wheel floating ability. And this is a road bike!

Yamaha has taken their time with this bike, leaving the world in the hands of their previous R1, which was very much outgunned by the likes of the ZX-10R, the S1000RR, the Ducati, the Aprilia, the MV Agusta and just about everything else. To the stalwart Yamaha customers, that have stood by them when snotty people on BMWs, Kawasakis and every brand under the sun came past them at speed, feel empowered. Your brand hasn’t let you down.

Here is Mat Durrans’s take on the R1 from The Bike Show YouTube Channel: