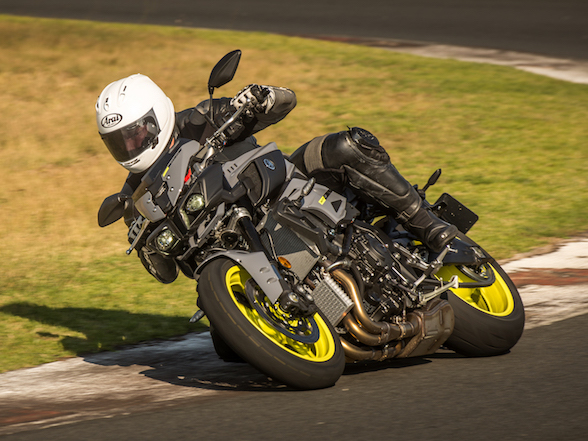 Spec sheets are deceptive. In fact, they should probably be banned on the grounds of being deeply misleading. 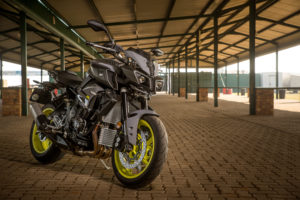 On the spec sheet, the new Yamaha MT-10 looks to be very much average. The 998cc in-line four engine pushes 160hp, which is more than any other Japanese naked bike has ever mustered, and the same as the BMW S1000R and Ducati Monster 1200R, but it is down on the KTM Super Duke and Aprilia Tuono. The Torque is 111Nm, on par with every other nudist motorcycle, but still down on the Aprilia, KTM and Ducati. The weight of 210kg is very much in the right ball park, but also not class leading, nor are the suspension components and brakes.

But, as we shall find out, spec sheets are deeply misleading. Judging a bike based on a spec sheet is like basing your future wife on her Facebook profile pic.

The MT naked range was designed to make Yamaha more exciting, at least those were the words of the Yamaha boss in Europe, and to a satisfactory extent, they have. The MT-07 and MT-09 punch way above their weight, with plucky motors that deliver smiles beyond the more meagre power output that the spec sheet promises, housed in chassis that are both slim and agile, creating more of a toy than a simple means of transport.

Now they have taken the motor and chassis from their much-lauded R1 superbike, and left it bare. They’ve called this new incarnation the MT-10.

Although, writing that it is an R1 with its clothes ripped off is terribly romantic, but some distance from the actual truth. It might share the same genetics as the R1, but the componentry in the engine is 40% different to the R1, and the chassis is 60% off. That’s a good chunk of difference, but the underlying foundation is still very apparent.

All track tests start in the pits, because Newton says we can’t just arrive on the track at speed (although Einstein and Hawking might throw in some interesting counter arguments), where the first step is to look at our subject. The Europeans base their design on their character, that is mostly motivated by an overly-inflated sex drive, therefore their bikes look sleek, saucy, almost feminine.

The Japanese are more polite in their manner, edging away from a sex-driven theme and focusing on their other passion – big robots. This is why the MT-10 looks like an android from the future in an overly-embellished Anime cartoon. It’s beautiful, but in a different way to that of its European peers. It’s not a case of lust at first sight because, at first glance, your vision is over-loaded with a mosaic of shapes and componentry, but the more you stare at it, the more the pieces make sense, and the more it becomes beautiful.

It’s beauty within the beast.

Most of the visual volume of the MT-10 is loaded towards the front of the bike, given its robotic shape more the outline of a pitbull in full attack stance, with its two LED eyes piercing deep into your soul.

Sit on the bike, turn on the ignition and the LED dash lights up to a series of lines and symbols that, after some accustomisation, become a plethora of useful information.

The R1 is small and sleek, while this bike has an almost bulky feel, not in a clumsy, laborious way, but more in a manner that lets you know that there is a bike there. The seating position is sportier than the MT-09, but still very much upright.

Thumb the large, red starter button and Rossi’s M1 MotoGP bike fires up. Regardless of how mature and responsible you are, the sound of that crossplane engine mimics that of its racing brethren with compounding accuracy, even if it is a little muted by the EU overlords.

It gets better as you select first gear and chortle down pitlane, with that sonorous gargle bouncing off the pit garages and the pit wall, until you cross the boundary that marks the end of pitlane and the beginning of racetrack, at which point the done thing is to open the throttle…

The 160hp output isn’t a class leader, nor is the conveniently repetitive 111Nm of torque, but this is only the spec sheet, and what does that know about real life?

…causing the bike to shoot forward in a flurry of midrange power, overriding the traction control and sending the front wheel into an uncontrollable ascent. Click second gear, and the front shows less orbital ambitions but still hops like a kangaroo after too many Fizzers.

And all the while, the M1 sound dominates your very being. The sound may be a trivial matter in the context of outright performance, but its contribution to the overall experience is invaluable, and your inner child is imagining you in your sponsored leathers, with your pit crew showing you P1 on your pitboard, even if this bike has no fairing and a unmistakeably road-like seating position.

The balance of the chassis is more biased towards fast steering, assisted by one spec that is class-leading – an ultra short wheelbase of just 1400mm, meaning it tips into corners at just the slightest hint of handlebar input.

Saying that, this bike is not as sharp and agile as the likes of the Tuono, but then it is not designed to be, offering a dollop of comfort in the mix of sporting pretences. It can pull its weight around corners, but will not instantly paralyse its rider everytime it runs over a crack in the tar.

It has the usual full stable of electronics – ABS, TC, three rider modes and even cruise control, all controllable via easy to reach buttons on the handlebars. All of them work with admirable competence, except the ABS, which has a tendency to make itself known when it is perhaps not yet required. This could be the fault of the radial callipers, that are not Brembo or any of the other commonly recognised brands, at least there is no brand readily apparent, and look like something off a superbike from the ‘90s. They do a good job bringing the bike to a halt, but maybe not with the required finesse. The over-keeness of the ABS could also be the fault of the Bridgestone tyres, that are very much road-biased.

And that is about it for criticism. Yes, more horsepower would be great, but this is true of every motorcycle ever built, and the crossplane engine does a fine job delivering huge midrange at the point where this bike is mostly going to be ridden.

The point of big naked bikes is not to do lap times – this is prowess of the superbike field – but to rule the public road, offering a comfortable ride while oozing entertainment. That is the point of naked bikes, and is exactly what the MT-10 does.