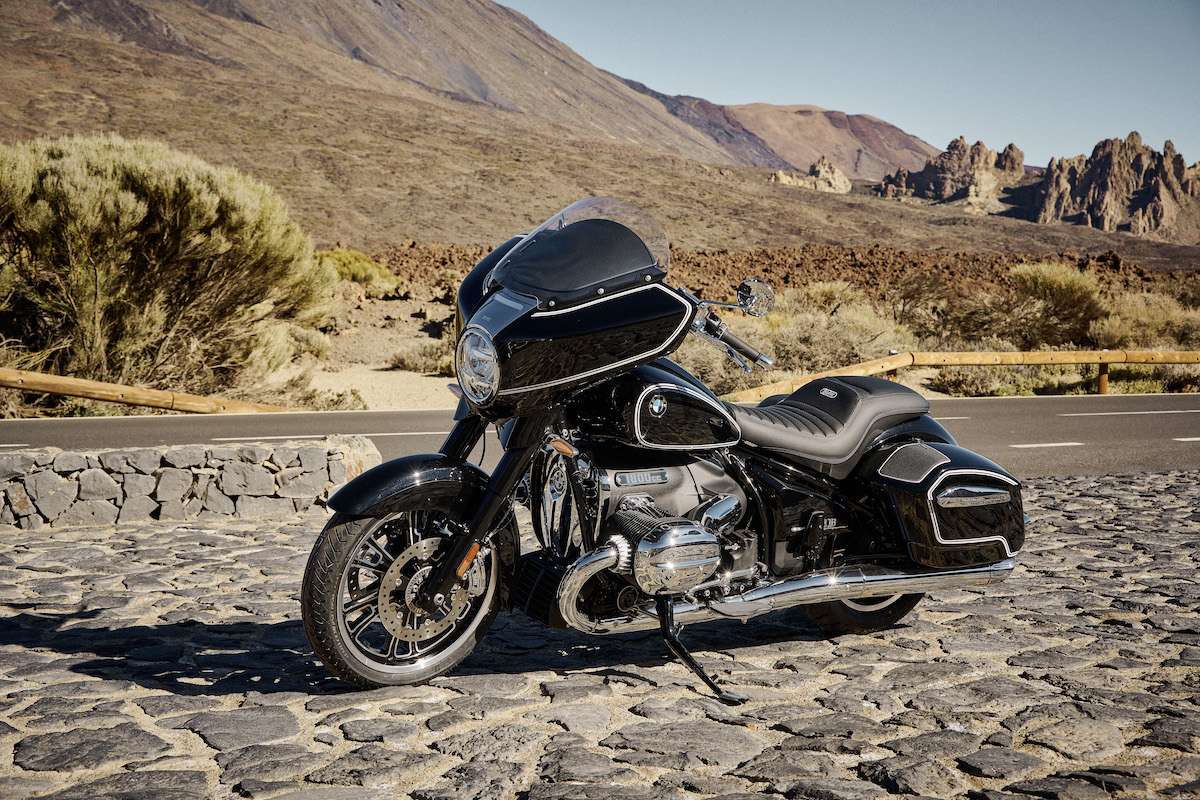 If I’m brutally honest with myself, and by extension you, I really didn’t want this new bagger version of BMW’s R 18 to be any good. In fact I was hoping it might be at least a little bit crap because, cynical old fart that I am, I thought that should be its just desserts.

That’s because this model is the very epitome of a bike born as a result of endless meetings of marketing teams and accountants (according to me, with no inside knowledge whatsoever). Various corporate professionals (many of whom may have never ridden a bike) had decided that in the endless quest for shareholder returns there should be a BMW presence in the potentially lucrative market segment of American-style touring cruisers.

And so the BMW people with the passion and the engineering know-how were entrusted with the onerous task of producing a bike that might appeal to an American looking for a cruising motorcycle with serious touring chops.

And on the back of the R 18 – though knowing how meticulous is the planning and stringent the budgetary requirements of a new model this bagger and its accompanying Trans Continental may well have been the ultimate goal all along – we have this B version that adds some significant distance crushing ability into the original Classic model’s mix.

Much of that new-found touring prowess arrives courtesy of the wind protection afforded by what is called a bat-wing fairing, exactly the sort of handlebar adornment made famous by the American-manufacturer-who-shall-not be-named in the reviewing of this new German touring cruiser.

Harley-Davidson (damnit, failed already) rules this very wealthy corner of the market, challenged quite legitimately by Indian Motorcycle over the past few years, and now facing yet more stiff competition from an unexpected European imposter.

If Harley can get in BMW’s face with an adventure bike then the gloves are off and a teutonic cruiser is the least you might expect from a company with both the heritage and engineering prowess to take the fight into Harley-Davidson’s back yard. Actually, forget the back yard, this model is already firmly ensconced on the front porch, swaying gently to and fro with a blanket over its knees on the family heirloom rocking chair.

This is BMW saying – yeah, that’s nice, but if you like that sort of thing then try this, it’s the same but with a whole lot of German engineering prowess and build quality thrown into the mix, and that makes it better.

That’s according to them, but what do I think?

Well, at this point I should own up to my love-hate relationship with America’s most famous marque. I have been fond of their large capacity touring bikes for a long time, although that feeling has been steadily souring over the past few years thanks to an inability to comprehend how limited suspension travel at the rear (for its aesthetic value) should necessarily condemn me to unavoidable and genuine spinal trauma every time I encounter an imperfection in the road bigger than a mouse footprint in wet sand.

This bike also cuts back on the available range within which the rear shock has to operate and yet I never once grimaced with pain during my 250km ride. And of course it will scrape its footboards during a ride in the mountains where corners are to be enjoyed rather than endured, but the scraping happens at what feels like bigger lean angles than the American opposition can muster.

Given the market it is attempting to entice with this model BMW has thrown in a decent sound system by teaming up with Brit rockers Marshall and so you get quality speakers fore (25 watts and standard fitment in the batwing fairing) and aft (90 watt optional subwoofersin the panniers). I could listen to the BMW playlist (enjoyable trip down memory lane for 54 year-old me, possibly ancient noise to any journalist under 35) and hear a full range of sounds up to about 100km/h which is all you can reasonably ask of a stereo on a bike.

Long distance comfort would appear to be good (I can’t know for sure given that my launch ride was 250km and punctuated by a couple of lengthy stops) but I’d have liked for there to be even a small amount of adjustment on the windshield, just to take some of the higher speed buffeting away from the top of my helmet.

The seat, too, is extremely comfortable, but I’d expect nothing less of a model whose very existence is built on the promise of large distances travelled and many hours at a time on the road.

While I’ve strayed onto the subject long distance comfort, the one obvious drawback for this European take on the American cruiser comes courtesy of the engine layout. The two big cylinders jutting out either side force your feet to stay behind them – anathema to any American cruiser rider who likes to stretch his legs and feel the wind up his trouser legs.

The instrumentation inside the batwing is very classy, combining something for the diehard traditionalist with four chromed dials. Speed, revs and fuel occupy three of the four (all that info, incidentally, is also readily available on the TFT screen) while the final dial displays ‘power in reserve’ as a percentage. It wanders up and down, kind of like a turbo boost gauge in reverse. It’s largely pointless, but still quite cool for some reason that I can’t quite put my finger on – perhaps it’s because it’s the same sort of indicator that Rolls Royce (now part of the BMW Group) initially made famous.

Underneath these four dials sits a 10.5-inch TFT screen that is a wonder to behold – like that first ever widescreen TV that you saw it redefines what we should expect on top of the range tourers these days.

Using BMW’s familiar controls to access a huge array of information and control your telephone, music and a bewildering array of adjustable parameters on the bike it comes into its own when displaying your navigation either via full or split screen. Brilliant stuff, and I don’t care how patriotically and defensively American you may be, but this system makes anything equivalent from that continent feel like it comes from an age where Fred Flintstone is still the main man.

The cruise control, which is a given on any model like this, has also been turned up to ’11’ with the optional adaptive cruise. It will keep you the right distance from the vehicle in front and allow you to concentrate on the scenery, and making sure you look as cool as you feel.

All this talk of technology and I haven’t even mentioned the obvious centrepiece of the R 18 Bagger, and that is its monstrously large 1802cc Big Boxer engine. It is a lovely thing to look at because so much effort has been expended to keep its extremities clean and uncluttered.

To ride it is very much what you would expect, but in my case with a whole extra dollop of smoothness thrown in for good measure. There’s tremendous grunt (148Nm claimed) from way down low in the rev range, exactly as you expect; but if I’m brutally honest I think I was hoping for just a little more given the engine’s capacity.

Given that the engine has to lug around an all-up weight of nearly 400kg (or half-a-tonne if you’re a big rider) then the performance is acceptably spritely, though as with all such big twin-cylinder cruisers there’s very little point in heading off in search of the redline (for a claimed 91hp) – the only reward is to torture your own mechanical sympathies.

Throttle response is always brilliant, the three different riding modes – are you ready for some cheese? – are Rock, Roll and Rain. The modes affect throttle response, engine idling character, engine drag-torque control and level of traction control. I left it in Rock because the other two modes left the bike feeling just a bit too sanitised for my liking.

The suspension has a lot of work to do given the weight it needs to control, but it does a fantastic job of it. So good in fact, that you will forget about it, as I did, and there’s no greater complement than that really, especially when you’ve been scraping footboards, traversing some bumpy back roads and also sitting on the highway for a good few miles.

Braking is also excellent, but it is worth reminding yourself occasionally that the rules of physics still apply, so if you want to stop in a hurry it’s worth bearing in mind quite how heavy is a fully-loaded bagger (passenger and a couple of weeks’ worth of holiday kit). The same goes for braking while trying to turn, or mid-turn if you’ve really screwed up and got in too hot – this bike WILL understeer.

Contrary to my expectations I couldn’t help but enjoy my time with BMW’s R 18 B, it performed well above and beyond the expectations I have come to expect of such bikes. It will cruise, it will tour and it will do both with enough performance and willingness to please that even if you are as grumpy as me, you will be blessed with a cheesy grin after each and every ride.

It is expensive, but that’s a given for this sort of bike, but I do think it’s worth the money. Will it be successful in the market it would most like to conquer? I’m not so sure of that, the Americans aren’t particularly receptive to imposters from overseas, and because it’s not a V-twin and it’s not American then it starts with a handicap not experienced by Harley-Davidson or Indian Motorcycle.

Still, whether our American cousins buy it or not is no measure of a bike in my book, so I would just say it’s at least as good as and, in many areas, much better than anything similar that they currently produce, and leave the buying decision up to you…

How to have fun and annoy the neighbours: The Rokon Trail-Breaker