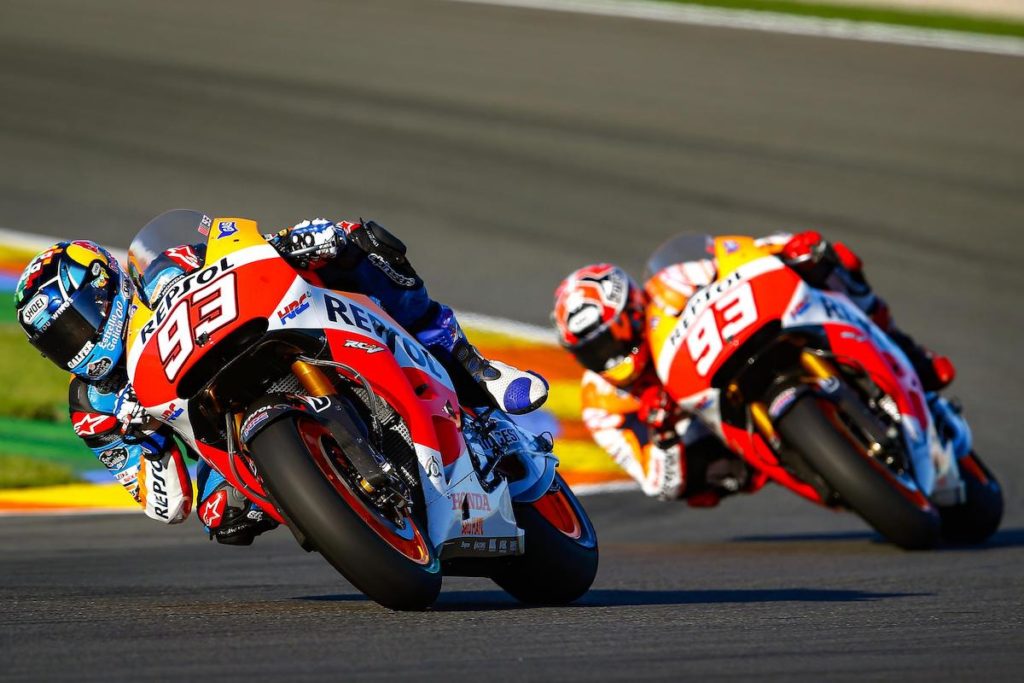 Story: Donovan Fourie
Alex Marquez will be riding the Repsol Honda vacated by the retired Jorge Lorenzo. We kinda knew this was happening because Alex Marquez was still hanging around the Valencia circuit despite the Moto2 team he was supposed to be riding for having packed up and left. There was also sources that said they’d seen a set of Repsol Honda leathers bearing the name Alex Marquez.

Let’s start by saying that, on merit, Alex Marquez may not be the best choice for this seat. Yes, he is the current Moto2 Champion, and that in itself is an accolade worthy of merit, but does it make him the first choice for one of the hottest seats in all of motorcycle racing? Possibly not.

Alex Marquez won the 2014 Moto3 Championship, narrowly beating the KTM of Jack Miller, however, most people tend to agree that Miller was the rider of that year, losing the championship by just two points, despite having being taken out in a collision with Marquez during the Aragon GP. In 2015, Alex Marquez joined the Estrella Galicia 0,0 Marc VDS Moto2 team, one of the most coveted seats in Moto2, and has stayed there for the past five years.

For all five years, he rode with the same team, learning as he went, until this year when he was able to clinch the title. Many have cited this as an achievement enough to earn him the role of factory Honda rider, however, it isn’t that simple. Five years in one championship with one team offers heaps of experience, but will that make him a genuine Repsol Honda candidate, especially when you look at who he is up against for that seat? 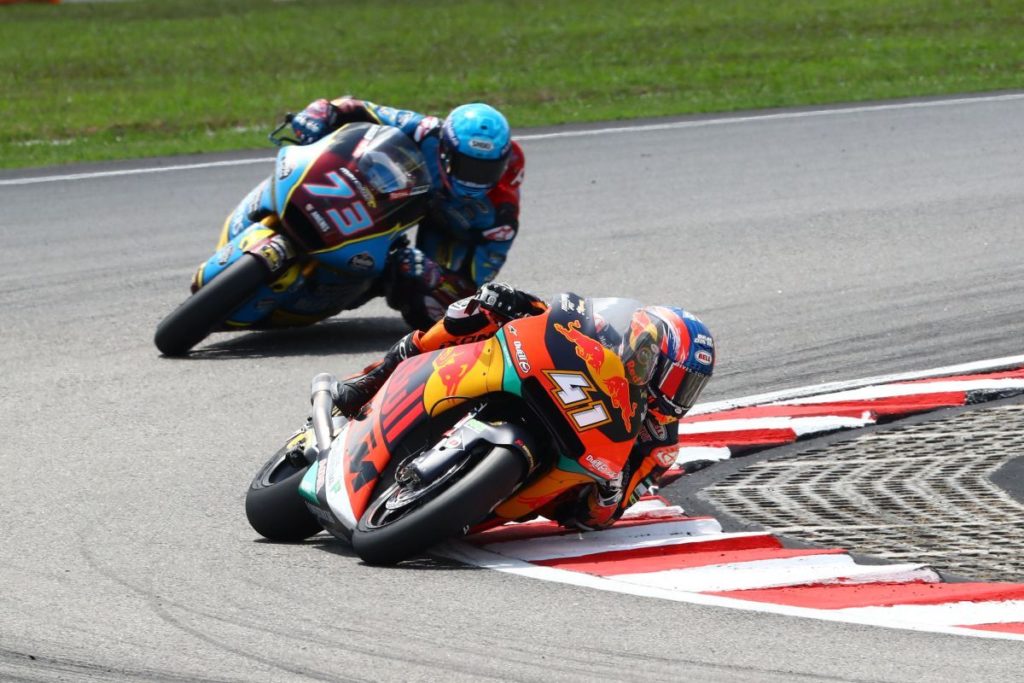 The first candidate would be Brad Binder, who has been in Moto2 for just three years, and who could well have won this title were it not for the fact that he spent the first half of this season riding an orange cement mixer. In the second half of the season, Binder completely outperformed the Spaniard. As former World Superbike Champion Colin Edwards commented on BT Sport: “That kid has more talent in his pinky than I have in my whole body!” Binder, though, has signed a deal with the Factory KTM team for 2020, however, if he was available I suspect he would still not have had a Repsol offer.

But it’s not just Binder in opposition – at the end of 2020, all major MotoGP contracts come to an end. This would put a host of other riders in line for that ride – Maverick Vinales, Alex Rins, Jack Miller, Joan Mir, Miguel Oliveira, Brad Binder and, of course, the whizz kid Fabio Quatararo. Looking at their track record, all of these riders have more merit than younger Marquez.

It’s possible that Repsol Honda is putting Alex Marquez on the second bike as a seat warmer until next year, but then surely the far more experienced Johann Zarco, who is out of a ride for next year, would be a better candidate? He would offer better input for development, would most likely score higher in the championship and would be far more cost effective, because he would not need to be bought out of another contract like Alex Marquez and would, quite frankly, accept payment in cheese and garlic snails.

So why did they hire baby Marquez? The answer is simple – Marc Marquez. The eight-times world champion insisted that he had no influence in the decision to hire his brother, however, even if he didn’t actually make the demands, he didn’t have to say a word. He influenced them by an unsaid factor. 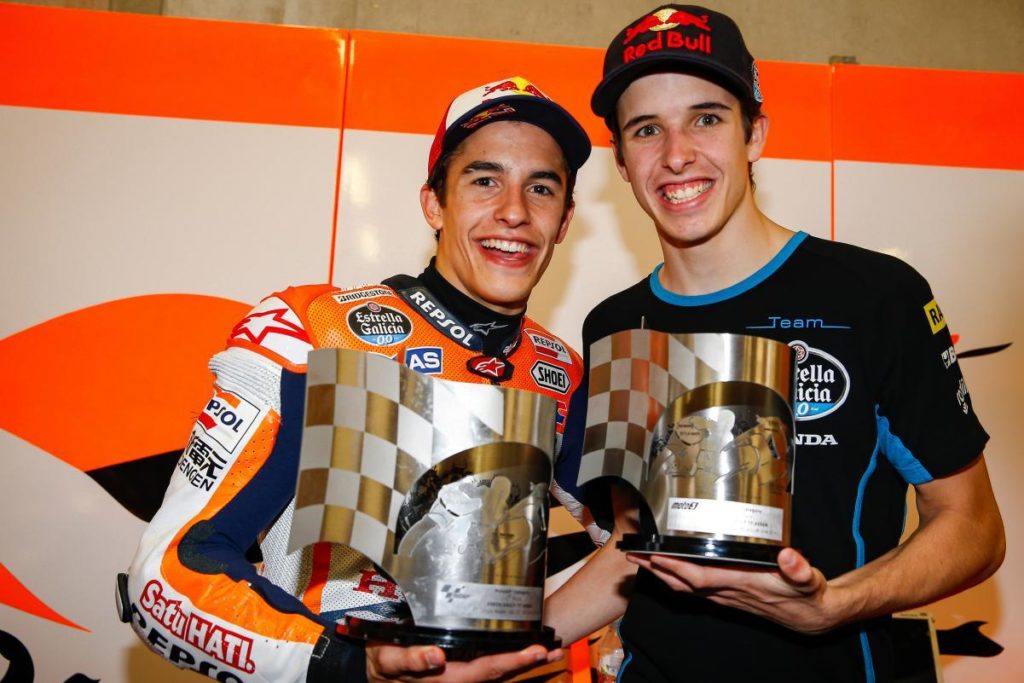 Honda has put all their eggs in one basket with Marc Marquez, building a bike around him and one that only he can ride. As we have seen this year with his record-breaking season, it is working for the racing giant, with them taking the triple crown of championships. It does, though, put them in a dilemma. At the end of next season, Marc Marquez is also up for a new contract. He has done everything you can do on a MotoGP bike, but one thing still plagues his career – he has not yet won on more than one manufacturer.

No doubt, Ducati would unload huge Phillip Morris cash to have him in their ranks, while KTM and Red Bull would be thrilled to do the same. If this did happen, Honda would be left with a motorcycle that no one can ride, and would suddenly need to completely undo eight years of development.

Step forward, Alex Marquez. With him in the team, Repsol Honda becomes a family affair, one that Marc and father Julio can feel all warm and fuzzy about, and as long as the Repsol team supports the entire family, Marc leaving would be seen as a treachery.

Perhaps Alex Marquez will succeed where Jorge Lorenzo and Dani Pedrosa has failed. Maybe he will gel with the Honda MotoGP machine immediately and rival his brother – wouldn’t that be interesting? History and Alex Marquez’s smooth style would suggest not, but then logic would tell us that he has plenty of time to adjust, because as long as he keeps Marc on a Honda and winning, he can stay as long as he likes.

Now Honda just have to add extra airbags to Marc’s suit, because if he were to get injured…

Previous Post Brad Binder wraps up his Moto2 career with three wins on the trot
Next Post Opinion: Should Valentino Rossi retire?