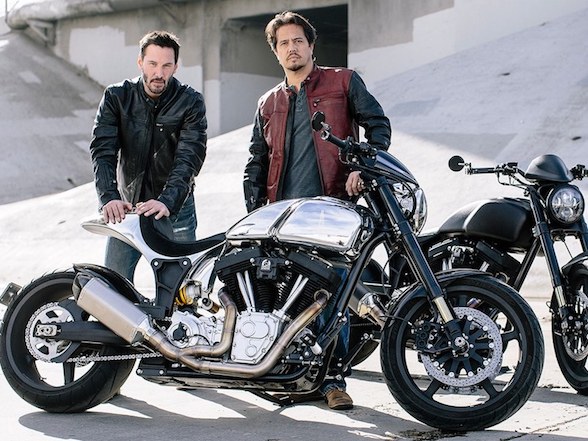 I was recently asked to contribute some comments to a lifestyle magazine about celebrity bikers. My interviewer wanted to know who are the coolest and what do they ride?

The chance to put a positive spin on motorcycling to those who might never give us a second thought was too good an opportunity to pass up, so I replied with what seemed to me the most obvious examples.

Valentino Rossi and Steve McQueen sprang to mind immediately, as did Barry Sheene, Keanu Reeves and Ewan McGregor. But The Doctor is a bike racer and not a celebrity I was informed, McGregor and Reeves just about made the grade while Sheene and McQueen elicited no response whatsoever.

I’m not exactly a dedicated follower of fashion, or indeed celebrity, but it strikes me as odd that MotoGP’s GOAT doesn’t make the grade as a celebrity. Sheene was the prototype for Rossi, both are world champions whose character off the track was at least as crucial to their worldwide appeal as the results were on it.

Steve McQueen, as anyone who has any interest in film will know, was a Hollywood leading man during the 1960’s and ’70’s. He often played the outsider, the renegade loner who had to do things his way. Cool Hand Luke, Bullit, Papillon, The Great Escape and The Magnificent Seven are just some of his anti-hero escapades, but the coolest part of this actor’s aura was that he was just the same risk-taker when he wasn’t in front of a camera.

A tempestuous love life, hounded by the paparazzi and way more famous than he ever wanted to be, what did this Hollywood heartthrob do to escape all the attention? He went fast; in cars and particularly on bikes he would enter races under an assumed name and after doing all the mechanical work himself would ride at a pace that opened up possibilities of professional racing if he ever fancied ditching the acting side of his life.

McQueen is, at least to someone of my advancing years, the coolest biker that ever lived; but he’s dead and that means, apparently, that his celebrity status is lacking.

I included McGregor because apart from being one of the other coolest dudes in the galaxy – Star Wars’ Obi Wan Kenobi – he helped spark the explosion in adventure biking by recording his travels around the planet with best mate Charlie Boorman.

Reeves also got my nod thanks to his passion for bikes, and his love for two wheels runs so deep he actually got involved with the creation of a new, niche motorcycle manufacturer. Arch Motorcycles builds a big V-twin performance cruiser that arose out of a design that Keanu Reeves wanted for himself, but it proved so good that they decided to start building them for sale on a limited scale.

All of these gentlemen seemed like eminent candidates for celebrity biking status to me, but my interviewer had other ideas. I was confronted with a barrage of names that, to be brutally honest, I mostly didn’t recognize, so I just spouted out a few more examples that I thought might impress.

George Clooney rides, and crashes too. As does Arnold Schwarzeneggar, Billy Idol, Bruce Springsteen, Matt Damon and Jay Leno. Brad Pitt’s a keen biker too, he’s even ridden here in South Africa when he went touring a couple of years ago, under the radar on a BMW R 1200 GS.

These chaps, I’m reliably informed, are all old has-beens and aren’t really celebrities for today’s youngsters.

I know Paris Hilton once crashed a bike at a red carpet event, I proffered, hopefully. Turns out she’s a bit long in the tooth as well, so an awkward silence ensued.

Jamie Oliver rides a scooter, I eventually whispered in quiet desperation. DJ Fresh? T E Lawrence? Ozzy Ozbourne? Evil Knievel? President Putin?Nelson Mandela? I made the last one up, but he was such a cool dude I’m sure he’d have been a biker given half a chance.

It’s at this point that the interviewer thanked me for my time and left, without having taken any notes. It seems my idea of celebrity and the magazine’s differ; the new definition includes those who are famous just because of who they are, rather than what they’ve done.

South Africa’s biggest biking celebrity? That’d be Brad Binder, a superhero who this year dominated his class of Grand Prix racing as has never been done before. If you fancy meeting him and listening to the story of his season then join me and the rest of The Bike Show team at Rim & Rubber in Greenside on the evening of Wednesday 30th November.

If you’re into celebrities, they don’t come much bigger than this young man, at least according to this old man’s criteria.