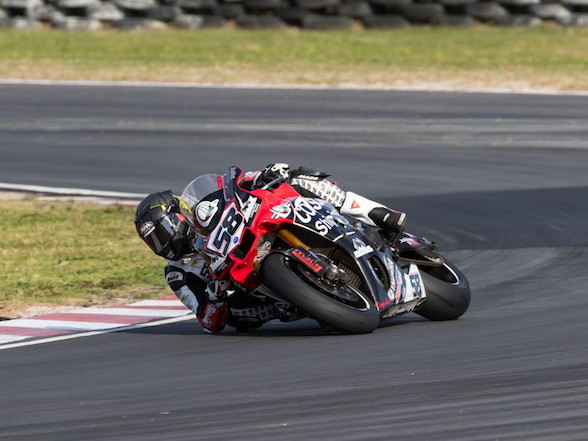 Story: Paul Bedford
Michael White (Consortium Shipping Yamaha R1) claimed his first national title when he wrapped up the 2018 SuperGP Champions Trophy by winning both heats at the fifth round of the series, held at the Aldo Scribante circuit in Port Elizabeth on Saturday, 25 August after defending champion Clint Seller (King Price Extreme / Bikefin Yamaha R1) crashed out of the opening race.

In the Super600 category, Adolf Boshoff (Uncle Andy Racing Suzuki GSXR600) took both race wins from Blaze Baker (King Price Extreme / Bikefin Yamaha R6) to close the gap to just five points between the two of them heading into the final round in four weeks. Kewyn Snyman (The Mag Workshop KTM RC390) won all three of his heats on the day to move to the top of the Super300 standings.

SuperGP
In Friday afternoon’s qualifying session, Seller and White were the picks of the field, with Seller almost four-tenths quicker than White. Daryn Upton (Uncle Andy Racing Suzuki GSXR 1000) led the chasing pack with the second row of the grid headed by Arushen Moodley (Dynamic Express Services Yamaha R1) who had Gavin Upton (Turn Skill Engineering Yamaha R1) and AJ Venter (Lekka Racing Yamaha R1) alongside him. Problems with the electronics on his RPM Centre/Stunt SA Kawasaki ZX10R prevented David McFadden, who was expected to be up with the front-runners, from setting a time.

In the opening race, White grabbed the lead when the lights went out, but it wasn’t long before Seller, knowing he needed to finish in front of White to keep his championship hopes on track, found a way through. The multiple champion pushed hard to open a gap, setting the fastest ever Superbike race lap time around the newly resurfaced Aldo Scribante circuit, before he lost the front end of his Yamaha through the fast-left-hand sweep. While Seller was not injured, the same could not be said for his bike, and he was out for the remainder of the day, the 59.862-second lap record his only reward from the trip to Port Elizabeth. With Seller on the side-lines, White had a comfortable run to the flag and the 25 championship points that went with the win. Behind White, McFadden had a somewhat lonely run to second with Moodley eventually getting the better of Daryn Upton to take the final podium spot. Gavin Upton ended fifth on the road and first in the SuperMasters category.

With Seller not able to start the race, White just needed to finish the second heat to claim the 2018 title. A cautious start left him in third, behind Daryn Upton and Moodley at the end of the first lap, but just a lap later he was in front and controlled things from there to take the race win and the 2018 championship.

Behind him, there was a three-way battle for the remaining podium positions between Upton, Moodley and McFadden. This became a two-way fight when McFadden’s Kawasaki cried enough. Moodley showed he had lost none of the skill that brought him the 2007 South African Superbike title, eventually finding a way past Upton to take second. Gavin Upton ended in fourth and again took the SuperMasters win.

Super600
There was very little to choose between Baker and Boshoff on the Super600 qualifying session, Boshoff claiming pole for the opening race by just 0.022”. The positions for the second race, based on their second quickest laps, were reversed with Baker a couple of tenths quicker than the Suzuki mounted man. Byron Bester (Hi-Tech Racing Kawasaki ZX6) completed the front row of the grid for both races. The second row of the grid was an all-Cape Town affair, Jared Schultz (Uncle Andy Racing Suzuki GSXR600) leading the way from Brandon Staffen (AJH Cooling/Keating & Jansen Kawasaki ZX6) and Gareth Gehlig (Formula Autos / RPM Centre Kawasaki ZX6).

Baker grabbed the lead shortly after the start of the first race and managed to open up a slight gap before Boshoff slowly hunted him down. With a couple of laps to go, Boshoff moved into the lead but Baker stayed on his back wheel. In the drag to the line from the final corner, it looked like a dead heat, but the timing system had Boshoff in front by just one one-thousandth of a second.

Staffen, riding with injured ankles and a fractured pelvis after a huge crash in a regional race at Killarney a couple of weeks ago, was able to hang on to third although his task was made easier when Schultz crashed out in the early stages. Bester ended in fourth, just over half-a-second behind Staffen with AJ Venter (TRD Motorcycles Yamaha R6) and Gehlig rounding out the top six.

In race 2 Baker was again the early leader, but this time he was unable to open up a gap. He and Boshoff swapped positions regularly, sometimes multiple times on a lap, but Boshoff was in front when it counted, taking the win by half a second and setting-up a thrilling finale to the championship at Phakisa in a month’s time. Bester just managed to hold off Shultz to take the final podium position with Staffen, who had to work his way back through the pack after running wide at turn one early on, in fifth ahead of Gehlig.

In the opening race, Iozzo grabbed the early lead but crashed leaving Snyman to take an easy win. Iozzo was able to re-mount but finished way down the field. Iozzo’s misfortune left Hulscher and van der Merwe to fight for the remaining podium positions, van der Merwe taking second, leaving Hulscher to settle for third. Fourie came home in fourth comfortably ahead of the battle for fifth and sixth which went the way of Keegan Mills (Kawasaki Ninja 300) from Deegan Claassens (Nine Nine Racing Kawasaki Ninja 300).

Race 2 was a ding-dong affair at the front of the field with Iozzo and Snyman swapping positions almost every lap for the first half of the race. Snyman then sat in Iozzo’s wheel track until the penultimate lap, when he was able to use a backmarker to his advantage, passing Iozzo and opening up a gap that Iozzo couldn’t close before the flag. Van der Merwe and Hulscher again spent the entire race within a couple of bike lengths of each other, with van der Merwe again in front when it counted. Fourie took fifth ahead of Claassens.

An early mistake by Iozzo in the final race dropped him to the back of the field and allowed Snyman to take an easy win. Iozzo fought his way back through the field, getting past van der Merwe on the final lap to take second. Fourie got the better of his duel with Mills to take fourth while the best that Hulscher, who made a mistake shortly before half-distance, could do was sixth.

Snyman heads to the final into the final round with a 21-point advantage in the championship standings with van der Merwe a further 23 point back.

BOTTS
Rob Portman (RideFast Magazine KTM Super Duke) made a welcome return to top-flight motorcycle racing and immediately made an impact, just missing out on pole position for the opening BOTTS race to Thomas Brown (Rehab Racing Ducati), but taking pole position for the other two races. James Harper (Moto Uno Ducati) was next up, ahead of Hendrik Fourie (Ducati), Alan Hulscher (ALDOR Steel Fabrications Ducati) and Christo Reeders (Ducati).

Portman grabbed an immediate lead in the opening race, opening up a substantial gap which Harper slowly closed down. It all came down to the last lap when a backmarker just slowed Portman enough to allow Harper to grab the win, the pair separated by just over a tenth at the line. Brown joined them on the podium, with Hulscher, Mick Landi (Rehab Racing Ducati) and Fourie rounding out the top six.

The second race looked like it was going to be a repeat of the first, but Portman crashed out of the lead on the second lap, leaving Harper to take another win, this time from Brown and Hulscher. Landi, Fourie and Reeders rounded out the top six.

Race 3 went to Brown, who had to fight off Hulscher with Landi joining them on the podium. Fourie got the better of Reeders to take fourth with Harper in sixth.

The SuperGP Champions Trophy now makes its way to Phakisa Freeway for the final round, which takes place on Saturday, 22 September 2018.