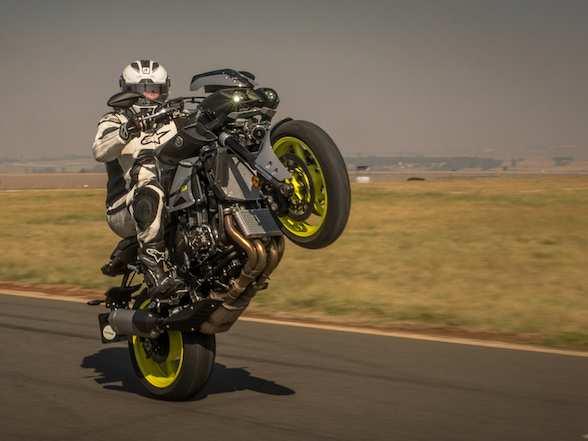 Wheelies are great. Wheelies are cool. Wheelies are dangerous and ultimately they’re quite pointless, so why do we keep doing them? This is the kind of conversation I’ve had on many occasions, generally with people who can’t wheelie. 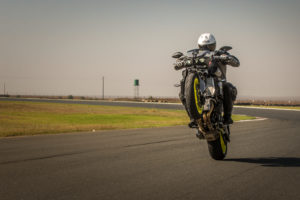 It is said that there are two types of biker – those that can wheelie and those that want to. This has prompted more than the odd sarcastic comment from my co-presenter on The Bike Show. Harry’s well used to the sight of a bike wheelying past him and he still thinks it’s nothing but a bit of unnecessary showing-off.

He’s not wrong, in a way, because as all the alpha males reading this realise, we’re evolved to be at least slightly exhibitionist in an attempt to attract the opposite sex. In ancient times this probably involved dragging the carcass of the mammoth you’d just slaughtered past the entrance of the cave with the hottest babes so they could see the size of your meat.

Wheelying is a slightly more civilised and less dangerous way of showing the ladies your meat, though I must admit I’ve yet to successfully entice any potential mates out of a 21st century cave on the strength of my modest ability to the loft the front wheel.

But it’s more than just about strutting your stuff in front of a crowd, wheelying is about the feeling, the adrenaline and the pure unadulterated fun it’s possible to have on a bike. I know this because, truth be told, most of the tens of thousands of wheelies I’ve pulled over the years have been while riding alone in the middle of nowhere with not a soul in sight.

World launches of new models, often held at tracks, are a great opportunity for these kind of antics. I shall never forget four of us Brit journos hooking wheelies during a Yamaha event, line abreast, for the length of Valencia’s main straight. We needed to regain some pride from the fancy pants Italian and Spanish journalists who were faster than us, and this worked perfectly.

At least we thought so, but our Japanese hosts weren’t that impressed, especially when one of us went on to use an R1 as a plough later in the day. 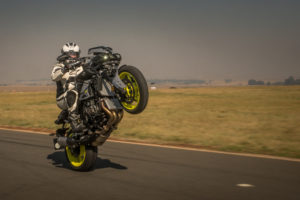 We did try to justify to the inscrutable Yamaha engineers that the wheelie is actually a very useful diagnostic tool and hence we should be applauded for risking ourselves in pursuit of the most effective review. Surprisingly this line of reasoning met with some resistance, but it had more than a grain of truth in it so we continued, probably unwisely, to labour the point until the ever generous Japanese decided to stop buying us drinks.

I’m not joking either – a wheelie really can tell you quite a lot about a bike in a very short time. Obviously you get an immediate feel for the engine – how punchy it is off the bottom end (most bikes don’t need more than 4000rpm to get the front climbing). Most wheelying is carried out with the midrange, and you get a sense of how responsive the motor is at these engine speeds as you play with delicate throttle adjustments to keep the front floating.

You also notice weight distribution with the rate of climb, the bike’s desire to drop its nose and where the balance point is situated. And when it goes wrong and you land one a bit heavy or slightly crossed-up you get an instant evaluation of the front suspension followed by a serious workout of the steering-damper.

If the test continues any further than this point you will be able to investigate the costs of various replacement parts and you may even get an invoice for the human mechanics who screwed you back together again.

The ‘testing’ angle a slightly spurious argument I’ll admit, and not one likely to withstand much scrutiny by the law, but there is some sense behind the apparent madness. Is it, though, enough to call a wheelie anything other than pointless and stupid? 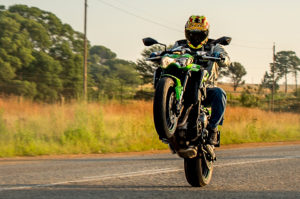 You know what, I don’t care. Pointless stuff is often the most fun, and believe me there’s not much that tops a spontaneous wheelie at the right time in the right place – on a lovely summer’s evening outside a pub stuffed with lonely Swedish au pairs on a hen party.

Wheelying won’t feel so bloody pointless then, will it? Especially if you’re the only one not on the back wheel…