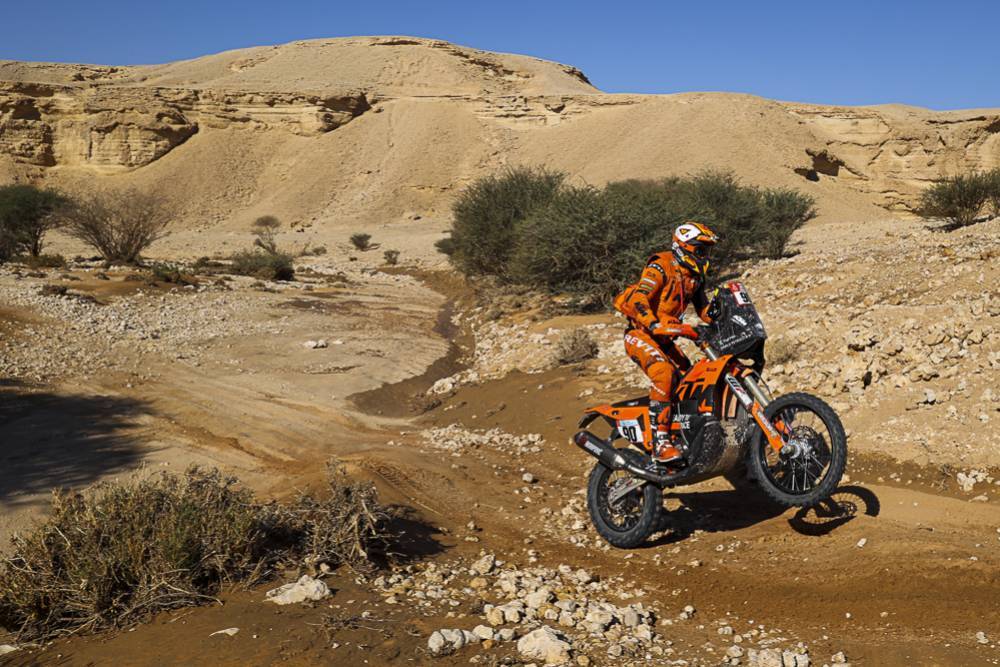 Well, this is terribly odd – Danilo Petrucci Stage Five of the motorcycle class at the Dakar Rally in Saudi Arabia. The 31-year-old Italian spent 11 years racing MotoGP, taking two wins while in the Factory Ducati Team. He retired last year, after a year with Tech3 KTM, and mentioned to the Austrians that he wanted to ride Dakar. KTM, being that sort of company, said yes, and he is now mixing with the best rally riders in the world.

Initially, his entry to the rally seemed more of a kind of publicity stunt for KTM and something fun to do for the Italian. We wonder if either believed this would happen.

Stage Five was 560km, with 346k of that being the Special, that he completed in 3 hours, 23 minutes and 46 seconds, a mere two seconds ahead of Botswana’s Ross Branch aboard the Monster Energy Yamaha.

Sadly, after suffering an electrical fault in Stage 3 and failing to finish the day, Petrucci’s result will not be classified in the overall results. However, he is still allowed to compete in a more non-official capacity.

Currently, the overall race is being led by Sam Sunderland aboard the GasGas, who is ahead of Matthias Walkner on the Red Bull KTM and Branch’s teammate Adrien Van Beveren. The Botswana rider is currently seventh in the rankings, with fellow Southern Africans Aaron Mare in 17th, Bradley Cox in 21st and Charan Moore in 39th.