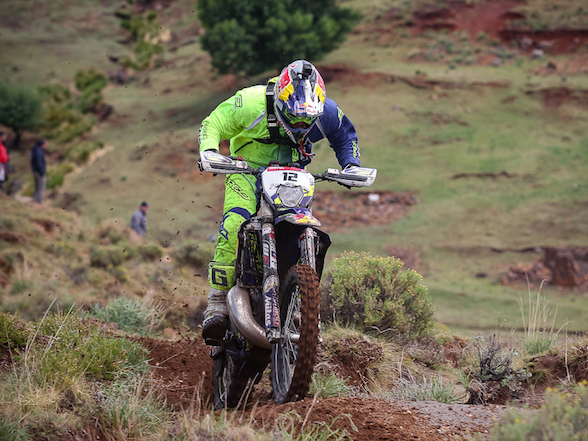 After winning yesterday’s stage of the Motul Roof of Africa 2017, Sherco rider Wade Young has crossed the finish line a massive 11 minutes ahead of rival Travis Teasdale on the KTM. This lead is more significant when considering that they were a just few seconds apart at the Designated Service Point roughly halfway through the stage.

By the time they had reached Soldiers Pass, the infamous new climb that scales almost the entire height of the Maluti Mountains a few kilometres from the finish, Young was already in the region of ten minutes ahead.

Graham Jarvis on the Husqvarana and Blake Gutzeit on the Yamaha were dueling for third place throughout the stage, right up until Solidiers Pass when Jarvis – a master at the slow and technical – managed to pull a three minute gap on the South African to take third. This was a small victory for the Englishman, but a far cry from what he was hoping, as the defending champion completed the stage a massive 22 minutes behind Young. While Jarvis and Gutzeit put in strong performances, Young and Teasdale seemed to be in a class of their own this year.

All these results are as they crossed the finish line and are still subject to adjustments, penalties and protests.

This is the 50th addition of the Motul Roof of Africa and has been marked as one of the most competitive thus far after the performances of Young and Teasdale, and is a significant step for South African enduro riders who are more and more proving their international calibre.