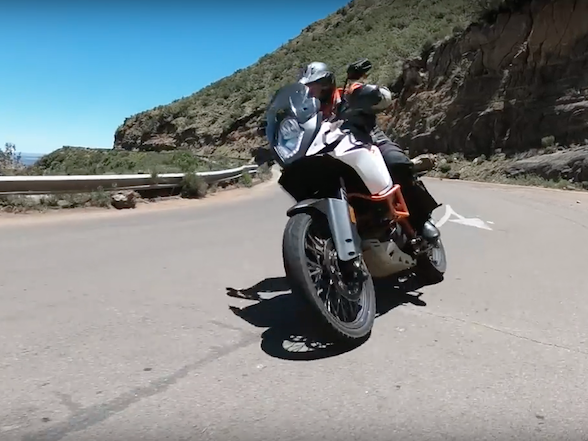 Donovan went to Lesotho as a guest of Motul for the Roof of Africa, and while he was there he did other stuff, like fall off a mountain on a fuel-injected two-stroke enduro bike and ride one bike that The Bike Show inexcusably never got round to test in 2017, the KTM 1090 Adventure R. In fairness, we were so lost in the glory of the 1290 Super Adventure R, the bike that won last year’s Pirelli Bike of the Year, that the 1090 sort of faded into the background. Our loss.

The 1090 is consider the “little” bother of the Adventure family, yet pushes 125hp, more than most other manufacturer’s flagship adventure model, so we can assume that the Austrians have a warped sense of perspective, and this is more apparent by the mad models they have made and the fact that they have  painted them all bright orange. Still, the 1090 R has all the off-road capability of any other adventure bike, and possibly more than some of the off-roaders. It has a motor that pushes a comparatively huge amount of power, yet not in the intimidating manner many people find with the likes of the 1290 or the Ducati Multistrada.

More so than discovering the 1090, Donovan also happened to remind himself of the glory of Lesotho. Many bike riders know it mostly as that place where the Roof happens and there are all those impossible rocky “passes”  that only mental enduro riders can climb, and yet, as Donovan finds, it is an absolute paradise. There’s scenery everywhere, there’s off-road riding galore – as advertised – and yet we tend to forget that the place is littered with tar roads – excellent tar roads. And of course it’s a mountain kingdom, and where there are mountains, there are mountain passes. Lots of them.

Watch the video and see for yourself:

For more on the KTM 1090 Adventure see the KTM South Africa website.