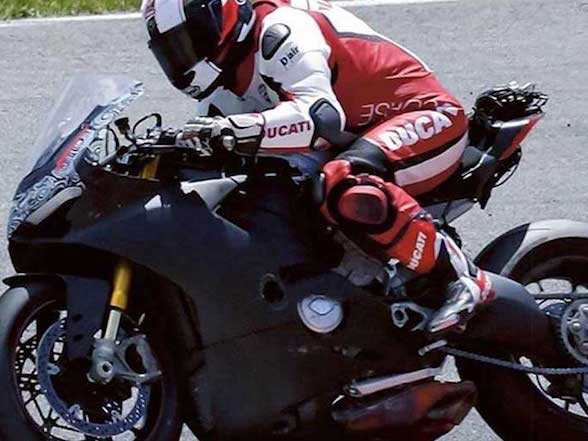 It’s now old news that Ducati is going to abandon the progression of their V-twin big capacity superbikes to make way for a new V-four configuration as it is believe that there is little more that the Italian bike maker can push out of the twin configuration as they already have a high revving machine with pistons the diameter of medium-sized comets.

With that, their R&D department has had a flick through the notes of the Ducati Corse MotoGP department and found a load of interesting designs for a motor with two banks of cylinders in a V shape. They also found that these designs can rev higher and produce more power.

While Ducati Corse boss man Gigi Dall’igna wasn’t looking, they photocopied some of them and got to work building a version of their own. They are due to unveil it at the EICMA Show in Milan in November – and we are sure Mr Dall’igna is going to be surprised, but we wonder how you can tell? – although testing has commenced with as much secrecy as they could muster, but moles with camera phones are difficult to detect.

The below video, while shaky and a bit unclear, shows them testing a prototype at Misano, and the most interesting aspect uncovered is the sound, which is not too unlike the MotoGP machines that they have copied. Unless more videos are snuck in, we will have to wait until November to learn more.

For now enjoy the video: