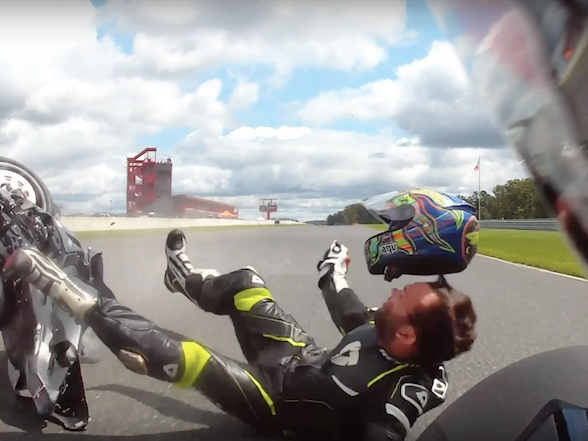 Video: Why the correct

helmet is so important

This event took place over the weekend at the New Jersey Motorsport Park round of the American Sportbike Racing Association. It was the end of the Superstock race when Jeremy Whitehurst crossed the line to finish second in his class. As he took the chequered flag he backed off the throttle of his Yamaha R1, like any people do when a hard race is over. Unfortunately, fellow racer Luiz Franchi, also on an R1, was right behind him, tucked under the screen and still accelerating hard.

The two collided – well, Franchi more or less slammed into the back Whitehurst – and Franchi was thrown off his bike. This is a perilous situation as it is, but it got far worse for the hapless Franchi when his helmet came off as he hit the ground leaving his head completely bare. Thankfully, he tumbled a bit and, despite one close encounter, he stopped without his head hitting the ground and then simply sauntered off the track.

He was genuinely lucky, as incidences where helmets come off are more common than people think and often the results are far more serious. Our first reaction, upon seeing this video, was that his helmet wasn’t strapped, but on closer inspection – as seen by the feature photo for this piece – it was. The only other two probably causes for his helmet’s untimely departure is either that his strap was done tightly enough or that he simply didn’t have the right sized helmet.

The forces acting on a helmet are massive, and this is made even more complicated by studies that show that the human head can even contract slightly when in a dangerous situation. This means that a helmet with a loose strap, or even a helmet that is slightly too large can quite easily lift off – even when the strap is done up properly.

See the video below. Keep watching for the slow motion: