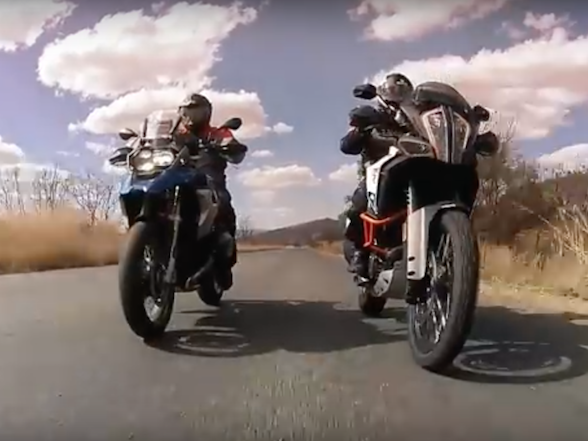 Mat and Donovan set out on the roads around Hartbeespoort with the two of the biggest contenders in the world of motorcycles – KTM’s 1290 Adventure R and the BMW R 1200 GS with the Rallye style kit.

Never mind Rossi vs Marquez, this is the big one. The adventure market world wide is massive, and manufacturers are bidding hard for a chunk of that pie, but as it stands, the two big players on the sale charts is the big blue and orange.

KTM have arrived with their usual flurry of aggression and fury. The 1290 motor is famous for off-loading buckets of torque and power and they placed it into, what is effectively, a beefed up motocross chassis.

BMW have stuck to their guns too with the Rallye, side stepping the horsepower war and maintain their useable torque stance, while bolting it into a chassis that’s comfortable, easygoing and classy.

That’s two very complex and thoroughly thought out motorcycles summed up in two very short paragraphs that understandably don’t do them justice. The video, however, paints a bigger picture.

The only downside is that we had only the tyres the bikes came with, meaning the KTM had knobblies and the Rallye had adventure road tyres. Still, despite the YouTube comments under the video, it is very easy to ride them together and get a reading. You can tell which bits of the ride are caused by tyres and which are the characteristics of the motorcycle. And obviously tyres were taken into consideration during the conclusion.

More so MX, off-road and stunting veteran, Dylan Smith, has a go at the ADA off-road facility (after Mat became his usual crybaby self when faced with a dirt road), and comes to a surprising conclusion.

See the full video below: