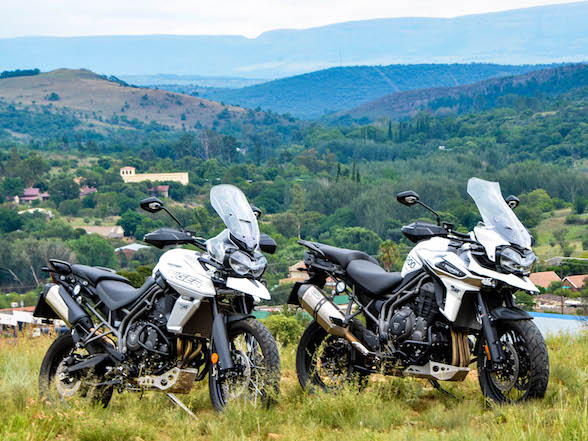 Story: Donovan Fourie
Pics: Chris-Marie Schlebusch and Triumph Media
A beautiful overcast day spent meandering north-west of Johannesburg, riding our normal Sunday breakfast run except detouring every time we came across a dirt road, proved to be fun experiment answering an often deliberated quandary – should I go bigger or smaller with my adventure bike?

In this case it was the battle of the Triumphs as we venture forth aboard the Tiger siblings. Harry had the 1200 XCA while I adorned the 800 with Darling Dearest embellishing the pillion seat. The route was simple – R512 towards Harties, Satellite Road, shortcutting up to the R560 before blasting along to Magaliesburg. All the dirt we found was the lovely, wide gravel sorts, and despite some effort to detect something steeper and more traily, that is all we could find, so we gave up our mini-Dakar ambition and went to Blackhorse Brewery for some breakfast. The ride home was a sinuous jaunt along the Cradle Road, making this a relatively all round package of terrain.

Die-hard adventurers will blast our efforts, stating the windy gravel roads is not “real off-road” but quite frankly they can get stuffed, because we had a good time, and the knowledge now gained from this experience has led the path of happy conclusions, and that is this – these two bikes are both cool, both slick and can both pack a punch, much like world renowned spies. The triple motors in both are smooth enough to slip beneath the skirt of the long legged journey, yet gritty enough to scale the unsuspecting villainous dirt section. The chassis are again both classy and elegant and at the same time not to be messed with, because they are capable when cornered.

This fictional spy theme is an apt one, and these two models take on the roles of the two most famous spies of our time – Ethan Hunt and James bond.

Tom Cruise plays the Mission Impossible character with his usual mellow style, saying the minimum and then hauling out the big guns when the bad guys get too cocky. This is also the American style of spy hero that can also be interpreted as an action hero except with a more low key approach, but nonetheless an action hero. It’s more about hanging from the top of the Burj Khalifa skyscraper or diving into a giant underwater safe with some complex reason why he cannot use a diving equipment than being quirky and throwing out one-liners.

This is the 800 Tiger. Yes, it has class and sophistication, but ultimately it wants to be in the thick of the action. The 21-inch spoked front wheel and the 220mm of suspension travel beg to take on anything thrown at it. The 94hp triple is not overpowering, but at the same time somehow feels stronger than it ought to. This is helped further by a dry weight of just 208kg.

James Bond takes a different approach, a cheekier one if you like. While Ethan Hunt is scaling the tall building on the outside in death-defying stunt, James Bond steps out of the lift on the top floor with his cigar ablaze and a gin and tonic in hand having successfully seduced the hotel manageress. After a smug sexual innuendo, he darts the guards using a button on his watch and grabs whatever he needs, while Hunt is still trying to locate his glass cutter after cleaning bird sh*t off his goggles.

And here we have the Tiger 1200. It’s dry weight of 248kg can be described as a gin and tonic too many, but like the inexplicably powerful feel of the 800 beyond its spec sheet quote, the 1200 doesn’t feel 40kg heavier than the 800. We thankfully never had to pick it up out of a ditch and are sure the extra attraction to gravity would then make itself known, but on the ride you wouldn’t pinpoint an extra 40kg unless someone ahoves a spec sheet in your face. It also has 44hp more than the 800, and yet seems to do things in a more calm and sophisticated manner. You can somehow imagine it, while the 800 is kung fu-ing a group of bad guys, calmly taking another puff of its cigar, sauntering around the ensuing fracas and expertly bopping the head bad guy on the back of the neck while prying the diamonds from his unresisting hands as he fell.

The 1200 has its supply of extra James Bond gadgetry too, including keyless ignition, a clutchless shifting, adaptive cornering lights, six riding modes, cornering ABS, hill hold start, an electronically adjustable screen and quite possibly the best semi-active suspension on the market. We are not joking here – the quality of the ride from that WP electronic suspension is sublime, possibly even making up for the 30mm travel shortfall against the 800.

This analogy is all made up bollocks, as I’m sure you the reader have worked out, but this is exactly how these motorcycles make you feel. The feeling you get riding a motorcycle is why we got into this game and during that ride past the green pastures of Magaliesburg, we got both the feeling of hanging from skyscraper window and the cigar smoke filled feeling of classy sophistication.

Harry took more a liking to the 800, while I was seduced by the 1200’s charm, and yet neither of would complain if we were given the other. They are very different, but at the same time both a lot of fun.