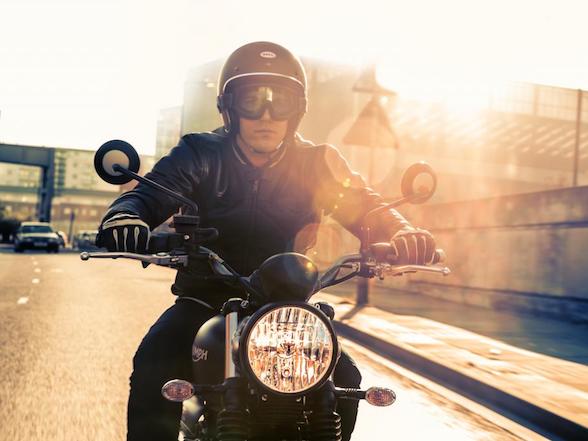 We test a lot of bikes on The Bike Show and, yes, most of them are brilliant at what they do; a sports tourer will be sporty and comfortable for long journeys; a superbike will be mind-blowingly fast; a cruiser will be gaudy and huge.

However, there is one type of bike that is becoming more and more popular despite telling the biggest lie possible. I am talking about the new breed of ‘scramblers’. 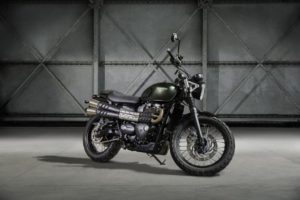 The Bonneville based Triumph Scrambler has been around for a good few years now but this one is all new for 2017; new frame, seat, wheels, handlebars and the 900cc, 8-valve, parallel twin engine that you’ll find in the Street Twin and Street Cup but with a slightly different tune.

It harks back to an era when off-roaders – MX, Enduro, call them what you will – as we know them today just didn’t exist. An off-road bike was a road machine that had been modified to tackle dirt as opposed to a bike that had been designed with the sole purpose of being ridden off-road.

So, is the modern breed of scrambler a bit of a plaything – style over substance – or are they serious motorcycles for off-road riding?

Firstly, let’s tackle the elephant that’s lurking behind the sofa in the lounge. This may be called the Triumph Street Scrambler…but it’s not a scrambler, is it?  Oh yes, it looks like a scrambler or, more accurately, a scrambler from the 1960s, but no-one in their right mind is going to take this off-road which is fine; it’s a styling exercise and, as such, it is very successful; perfect for the rough and tumble of the urban jungle. The very low centre of gravity coupled with soft and supple suspension, a punchy engine and great handling, wide handlebars and a fantastically comfortable seat make this a lovely little machine. 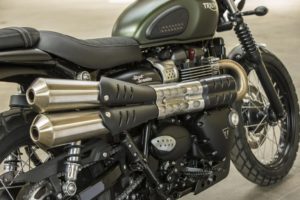 Yes, of course it could go off road – a Ducati Panigale could go off-road if you put knobbly tyres on it – but it doesn’t mean it would be any good at it. Ground clearance on the Street Scrambler is too low and the suspension has too little travel. Not only that, but there is no protection as standard and it’s just too pretty to encourage throwing it at the scenery.

OK, that all sounds pretty negative but it’s really not meant to be. It is only negative if you are expecting a level of off-road ability but the Triumph Street Scrambler knows it doesn’t  have any so it can’t be held against it.

We often talk about fitness for purpose; does the bike do what it says on the tin? There is an element of artifice about the Street Scrambler but it does it in such a friendly, cheeky way, you can forgive it. What helps is that it is such fun to ride.

It’s not a fast motorbike but it is a not-fast motorbike that encourages you to ride it as fast as it will go, absolutely everywhere, which is still plenty fast enough around town. Figures of 55bhp and 80Nm of torque are not all that impressive but they are very fit horses in the engine and, while the RnineT Scrambler from BMW may have twice the power and nearly half as much again of torque, it doesn’t feel any faster. 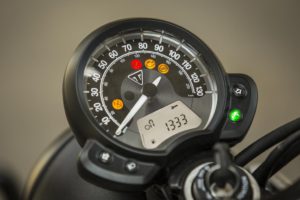 We need to stop being obsessed with the idea that calling a bike a Scrambler means that it has to go off-road. Just as we get rid of the notion that a Cafe Racer is that; a racer. Those roles have been taken over by sports bikes and adventure bikes, leaving us to enjoy style for style’s sake. The new breed of retro bikes are an aesthetic and none the worse for that; who says we can’t have a bit of style in our lives?

I have to admit that when the Bonneville range came out in the early 2000’s, I wasn’t all that impressed; I felt them to be a bit gaudy and vulgar; in slightly bad taste. Did we really want to be reminded of the last dying days of the old Triumph with the unlovely T140 Bonneville that was so desperately long-in-the-tooth? Time, happily, has proven me wrong and the new range of Bonneville-based retro bikes are the best on the market today; I love them just as much as all the other, modern, models in the Triumph range.

The Triumph Street Scrambler is a brilliant urban tool; you just know you look good on it and that, when you park it and walk away, you can look back at and think; yeah, that’s a really cool bike.