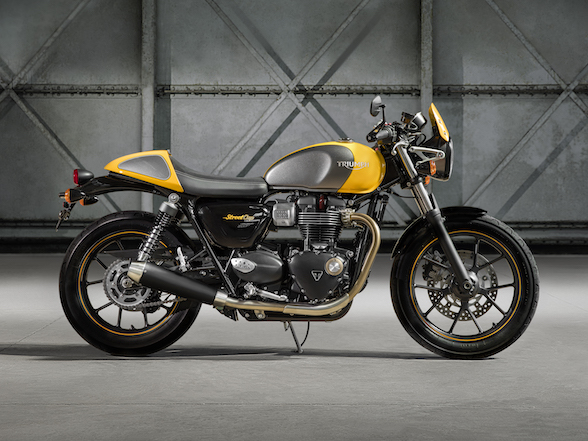 Retro is everywhere, in the sneakers you wear and the films you watch, the furniture you sit on, the food you eat and inevitably, the bikes you ride. This craze has been building for a few years now, seeping into any and every kind of product, and motorcycles are no exception. 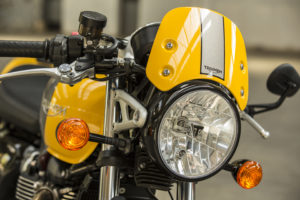 Several manufacturers have been quick to capitalize on the fortunate fusion of both this fashion trend and their own rich histories to create a wealth of retro-themed models. The Europeans are the main exponents of this new niche with Triumph, BMW and Ducati churning out charming looking and generally sweet riding bikes that appeal to fans of retro.

I’ve just spent a few days with the latest arrival from yesteryear, a bike that harks back to a time before I was born so I can’t pretend to get misty-eyed about the memories it brings back. I am, however, a sucker for a good looking naked sport bike, and in modern parlance that’s exactly what Triumph’s Street Cup is.

Okay, you’ll have to apply the sport label rather loosely because in the 21st century the combination of 40Kw (53hp) and 200kg dry weight does not a sport bike make. These are figures that may have been class leading in the 1950s, but now they’re not even enough to challenge a decent maxi-scooter.

But that doesn’t matter because although this is effectively a race replica from a different time, you’re not meant to be racing it now. The Street Cup’s style, and even its name, borrow from the club racing scene in the UK from 50 and 60 years ago. Keen amateurs would ride their bikes during the week then hastily convert them into race trim after they’d ridden to the track on the weekend. 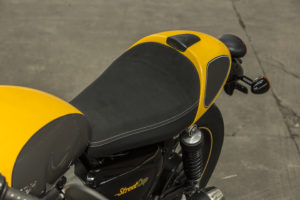 It’s this kind of home-brew engineering that is at the heart of the cafe racer, and though that may be at odds with a factory produced version there is always virtually unlimited scope to individualize your bike via a bewildering array of after-market parts. Think of this as a two-wheeled blank canvas, a good start for those like me with neither the skills nor the time to start from scratch.

The Street Cup is a different twist on a model that came to South Africa last year, Triumph’s Street Twin taking a more traditional approach to the styling. Underneath the very different threads, the nuts and bolts are pretty much the same.

The same 900cc parallel twin engine is housed by a tubular steel frame with twin shocks at the rear and a set of traditional ‘right-way-up’ forks at the front. The handling is exactly what you’d expect, stable and not particularly lively in modern terms but neutral and predictable in a way that makes it easy to ride, even if it was to be your first big bike.

40Kw may be nothing to boast about, but the 80Nm peak torque figure is worth a mention. It’s available from so low down that if you time your gear changes right and keep in the sweet spot the parallel twin will grunt through a series of sweepers with a respectable turn of speed. 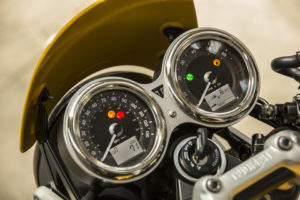 You’ll feel like you’re going faster because the sound from the Street Cup’s unique twin silencers is an addictive drone that fuels your retro fantasies of bombing around the Isle of Man with half a football for a helmet and a tightly buttoned tweed jacket for protection. I was seeing everything in black and white and talking with a plum English accent by the time I returned the Street Cup.

It’s amazing how different an altered riding position can make the same bike feel. These may be the exact same ingredients Triumph uses to cook up the Street Twin, but with the lower handlebar you’re pulled over the front of the bike in a gentle racing crouch. There’s definitely a feeling of wanting to ride this model harder than the Street Twin, even though they’re essentially the same bike.

As is the case with many retro styled machines the joy is in the details. The beautiful paint with hand-painted pin stripes and number boards, a removable tail cowl and a surprisingly useful fly screen. There’s no doubt, whether you enjoy the whole retro-chic thing or not, the Street Cup is pleasing on the eye. 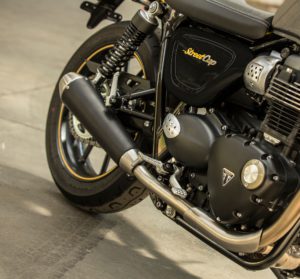 And it will stay that way longer than the original would have done, because beneath the patina of faked age there is today’s technology in the shape of ABS and a perfectly measured ride-by-wire throttle. The single front brake disc is up to the job, the gearbox is sweet and the suspension can handle the demands of the not particularly demanding engine.

At R139 000 it is priced competitively, and offers a lot of practical bike with more than its fair share of style. Commuting or a weekend toy, the Triumph Street Cup will happily answer both calls.