Donovan Fourie spent a day with the largest mass-production motorcycle motor in the world. Luckily, it was attached to the rest of the motorcycle; one that Triumph calls the Rocket 3, and what an appropriate name that is.

Story courtesy of RideFast Magazine
Life sucks right now. People are dying, others are getting sick, everyone is feeling economic pressure, but the biggest tragedy besetting us, dear reader, is Parked Motorcycle Syndrome.

We are in our garages, looking longingly at our beautifully manicured motorcycles, lovingly feeling the handlebars, looking lustfully at the lifeless dash and imagining days of sunshine and the open road. What we have here is mental torture. It’s cruel.

We need to leave. Not just this country, but this world. Find other worlds. Go galactic!

For that, we need a rocket.

People who have kept tabs on the flat-earther shenanigans will point out that building your own rocket to leave the planet tends to end with a crashing return to earth. It is not conducive to a long, happy life – amazingly, building a rocket requires a compliment of PhD holders and a few billion dollars. Not a shed.

How could flat-earthers possibly know that?

So, unless you have a name like Musk, we need something a little more obtainable. With a trumpet fanfare, step forward our saviour, Triumph, with their conveniently named Rocket 3.

The previous Rocket 3, armed with a 2,300cc timebomb, could shift the world – when you opened the throttle, the bike didn’t move forward but rather the world turned under you. Now we have a new Rocket, and the world is no longer merely being turned beneath you at a throttle twist but is rather being shot out of orbit and hurled towards the sun.

Like the previous Rocket and as is traditional for Triumph, the new model is again adorned with a three-cylindered motor. Although, each cylinder has had a wider 110.2mm piston (up from 101.6mm) squeezed into it and so the capacity has expanded to 2,500cc (technically, it’s 2458cc but let’s not allow the truth to get in the way of a good story). 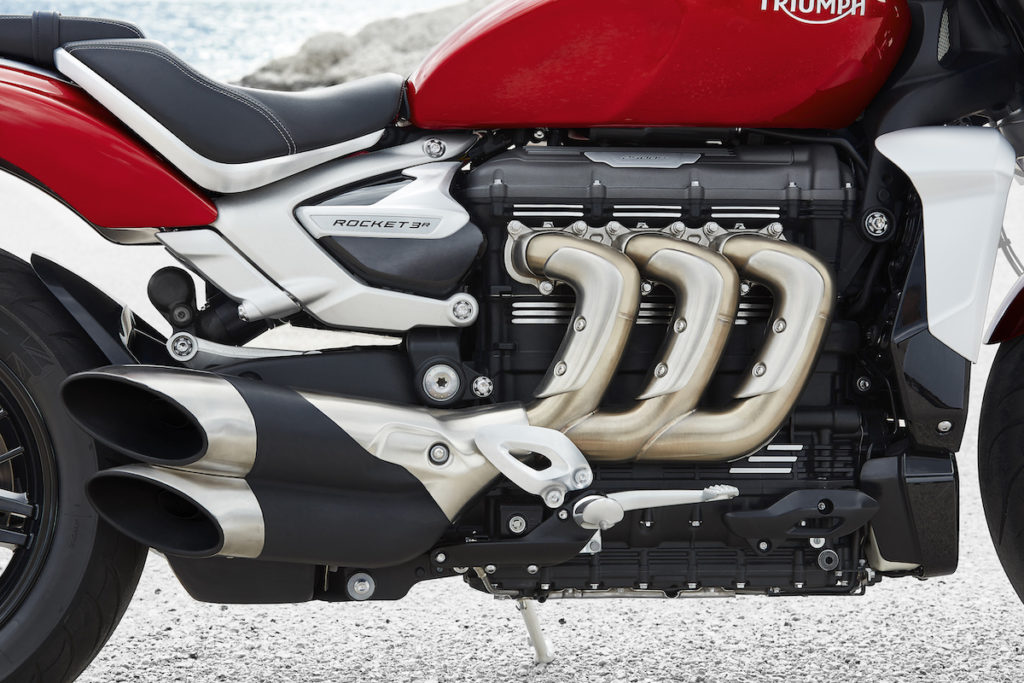 Of course, with the rocketing increase in displacement comes a rocketing performance of 165hp, a massive blast up from the previous model’s 105hp. A power boost of more than 60% is enormous, but it isn’t the main headline. That goes to the tip of the torque curve – 221Nm!

The planet shall move…

More good news is the new chassis that also brags big numbers, mostly about how much it is being sucked down to the planet. That magic number is 294kg, the same as some of the moons of Jupiter when compared to the relatively dainty world of superbikes and commuters, however, compared to the previous Rocket, it is 40kg less. Keep in mind that the new model complies with the modern Euro emission bureaucracy, so Triumph would need to have lost even more than 40kg to make up for the extra bits of tree-hugging.

Most of that weight-shedding comes from the new aluminium frame that is teamed up with Showa suspension and top-shelf Brembo Stylema callipers. All common electronics come standard apart from a quick-shifter that remains an optional extra.

With the facts off-loaded, we now gleam the subjective – the Rocket exudes graceful brutishness, a paradox that swings from the latter to the former depending on your proximity. From afar it has the countenance of a goggle-eyed ghoul snorting its moist, angered breath in enraged contempt at your very existence. Go closer and you find a level of detail that is ever more becoming “Triumph-esque”. Every piece of this machine is finely crafted out of adamantium and unicorn horn. There are no cheap, plastic place-markers or bits outlined by tin-snippers. It’s all Michelangelo and Donatello beauty carefully pieced together to form anger and rage personified. 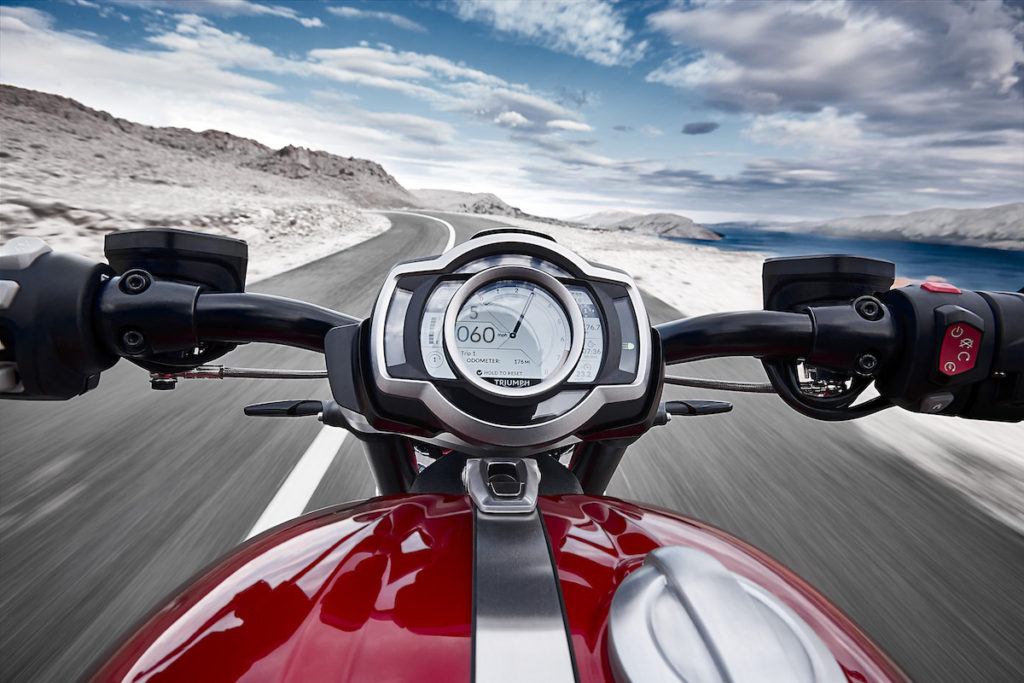 With the key-fob secured in your pocket, thumb the standard-issue Triumph starter button on the right handlebar and the Rocket’s lungs begin to fill, the heart pumps and the vocal cords rumble. It idles with an industrial growl – a mass-production of rage ready to be released.

The motorcycle was ours for just one day, so the ride consisted of a cruise to the Cradle followed by riding past a film camera over and over again. The ride there was traffic laden, where the Rocket behaved admirably, choosing to kill me in a fair fight on an open road rather than while in hampered by gridlocks.

It’s smooth and relaxing, even when being pulled to earth by 300kg.

It was the same script through the bends of the Cradle where corners became an event. The brakes are Stylema from Brembo, the same units found on some of the top track-focused superbikes, and offer the rider more than just the ability to stop quickly, but also the ability control the rate of slowing down, especially when trail braking into corners, something that helps when attempting to change directions with Europa the Moon.

However, change directions this beast can do – it’s like being charged by a rhino and finding that it has no problems matching your zig-zags.

The Showa front forks are never particularly overwhelmed because you are never quite able to push the front hard enough on a bike this big, and the rear shock offers an admiral level of absorption given that cruisers and muscle bikes will usually cripple the rider when riding over a leaf.

Europa will not hold any guns to superbikes, but it is the best handling moon. The previous Rocket felt like it had a pivot in the middle of the frame and went wayward even when heading in a straight line. The new Rocket feels calm and collective, and while moons will never feature elbow sliding except while capsizing, it is strangely amenable to rider’s will. It tips in without as much protest as you’d expect, it remains calm while leant over without readily smashing bits of exhaust and footpegs into the ground and the torque of the motor wenches it out of bends in any gear at any revs. 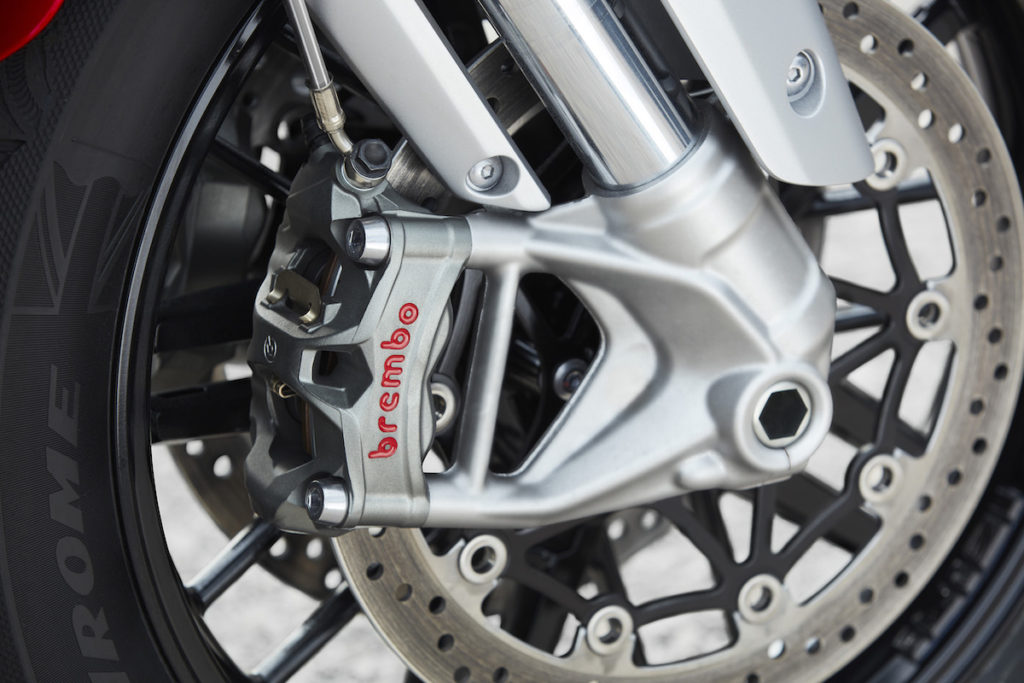 Of course, while out of traffic and in the open, we can now open the throttle. The Rocket, so far, has remained strangely reserved on issuing out death and destruction, despite its barbaric spec sheet that shows that it clearly can at the snap of its mighty fingers. Clearly, it is waiting for this moment.

With a dedication to the journalistic profession, I pointed the Rocket in a straighterly direction, said a small prayer to whatever deities might be in earshot and opened the throttle…

Riding other big cruisers, especially the likes of the Ducati XDiavel, slaps your back when you open their throttles, thrusting you forward in a dash of sudden acceleration. Those are mere twins with pistons thumping at a mere 1262cc of explosives. Being knocked by three pistons at 2500cc should turn every bone in your body into powder and render all internal organs jelly.

And yet, it doesn’t…

The motor is large and industrial and does things in an industrial manner – not in slap-dash outbursts. The others might slap you on the back with a meaty hand and dart you forward, while the Rocket does things on an almost geological level. It feels more like a giant tidal wave approaching the shore, picking you up and carrying you in an unstoppable bout of mass destruction. The force it instils is like the un-cappable flow of magma from a volcano; the continents drifting into one another, turning the earth’s crust into tinfoil and raising whole mountain ranges.

But all this happens in a way that is almost too humungous for us mere mortals to perceive. The context was given only later when I rode Mat’s BMW S1000R, a naked bike renowned for its punchy delivery, except that after the Rocket, I’d open the S1000R throttle and think: “where has it all gone?” 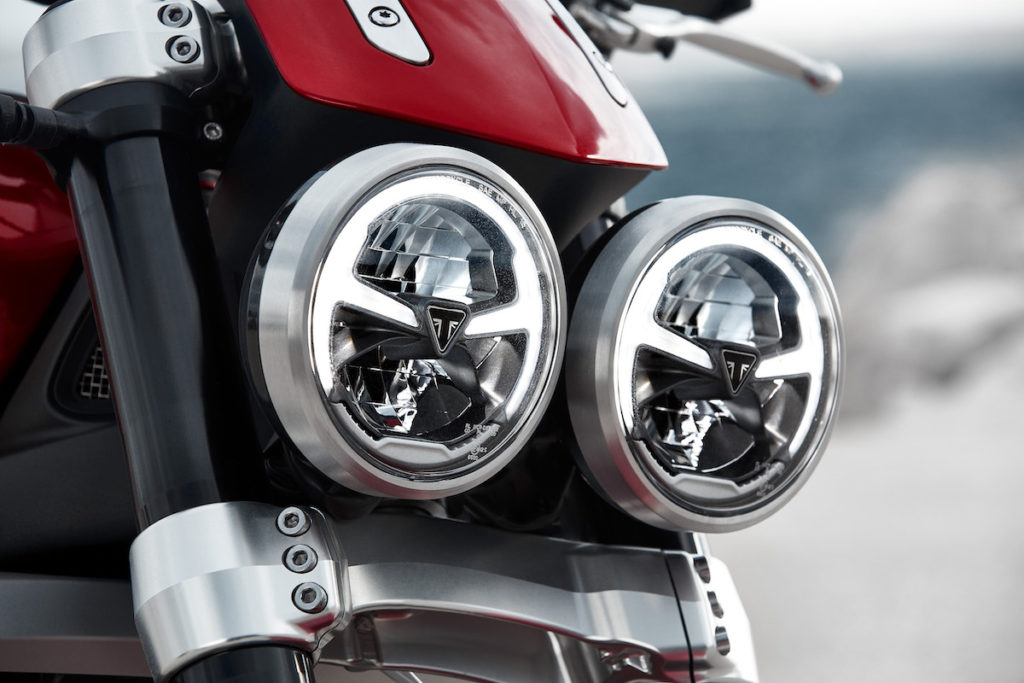 The specs tell the story of a death machine ready to cause mass extinctions, but real life tells the story of a dichotomy: a huge, muscle-strewn ogre with throbbing veins jutting out of stretched skin. Except that instead of mashing you to a pulp, it holds out a gentle right hand and, in the Queen’s English, says: “how do you do?”

The Rocket is a gentlemonster; however, it won’t launch us into the COVID-free galactic adventure its namesake suggests. What it will still do is send the world hurtling towards the sun. That might sound like a tragedy, but the warmer weather should dry up the spread of the virus and get us back to riding.