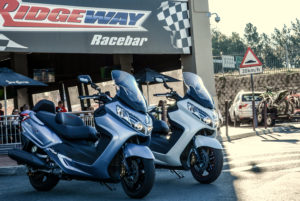 They are grand and majestic to behold

These are new waters for the Taiwanese brand, after previously only venturing up to 300cc with their 300i, a mid-sized scooter that was praised for its perky engine capable of speeds beyond 150km/h, its easygoing demeanour and its impeccable build quality, but now the island nation is moving into the territory of the big boys, the likes of the Yamaha T-Max, the Suzuki Burgman, the BMW C-range and the likes of the Aprilia 850 maxiscooter, a hotly contested and highly coveted market…in Europe.

Sadly, South Africa has not caught onto the idea that scooters can be more than pink buzz bikes with baskets designed for girls to go to the florist on Sundays, especially in the case of maxiscooters, a craze so big in Europe and elsewhere in the world that even the likes of Valentino Rossi openly covets his Yamaha T-Max.

This fact was brought to light a few years ago at a BMW world launch that was held conveniently in Cape Town. We were sitting at dinner with one of the BMW designers from Germany, who was contractually obligated to sit at our table and commence with polite chit-chat. At that stage, the first launch of the BMW range of maxiscooters was imminent, and this designer happened to be a part of that project.

He was keeping his cards close to his chest, as is the way of factory representatives discussing bikes that are yet to be launched, but we had established that it was going to be among the most sophisticated scooters ever built, and that he was deeply excited about its release. It was at that moment that the South African journalist sitting next me – unfortunately, I cannot remember who he was, only that he was not a regular among motorcycle journalist circles – asked with a chuckle: “Yes, but how much is that scooter going to cost? It is probably going to cost nearly the same as a real motorbike!”

There was a moment of shocked silence as the engineer looked at him with disdain.

“I don’t understand this place, South Africa,” he replied indignantly. “Every time we mention the C650 here the first thing people talk about is the price. What is wrong with the price? South Africans seem to think that because it is a scooter it must cost less than R30,000.

But it has the same engine as an F650GS, it has a chassis that is more stable, better handling, more comfortable, more economical, has more luggage space and as much technology? Surely, if anything, it should actually cost more?”

The Sym is a similar case, with two marvellous larger scooters that the majority of the SA biking fraternity will completely overlook on account of “costing nearly the same as a real bike.” 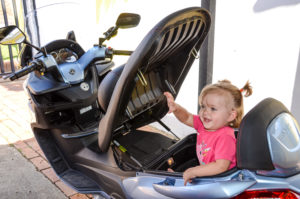 The boot on the MaxiSyms is massive. Enough to take a passenger perhaps, as young Leia demonstrates.

There are two models – a 600 and a 400, both succeeded by the letter “i” because anything with a small “i” in its name is sophisticated, modern and cool. They both have elegant dashes and switch arrangements, including a handlebar button that opens the seat electronically. There is enough boot space to rival a Korean Hatchback, with three charitable cubbyholes in the front, and an underseat compartment big enough to fit a toddler (see pic).

Both models have liquid-cooled, fuel injected, single-cylindered engines. The 400i has a 399cc barrel that pushes 35hp and 34.5Nm of torque, while the 600i has a 565cc barrel that surges forward with 41hp and 43.2NM of torque pushing it along. They both weigh 234kg, which sounds like a lot, but that weight is negated by the fact that the seat height of each is just 755mm, meaning that even a person with the most stunted of growth can sit on them with two feet firmly planted on the ground.

The seats, both rider and passenger, are massive, and form a half bucket shape that partially encapsulates its occupant in a lumber-supporting happy place. The engines are not likely to set any land speed records, especially the 400i, but are nippy enough in town riding, and the 600i is capable of cruising happily on the freeway at 150 km/h, going beyond 160km/h if pushed, with the adjustable screen and the wall created by the step-through design keeping moving air in a different time zone, with the rider in a bubble of calmness and relaxation.

While we harp on about the price of these two maxiscooters rivalling that of a “real” motorcycle, the truth is that they don’t. The 600i is R77,995 while the 400i is R65,995. For those prices, the only “real” motorcycle you’re likely to find is a Japanese 300, with less stability, handling, comfort, economy, luggage space, technology… 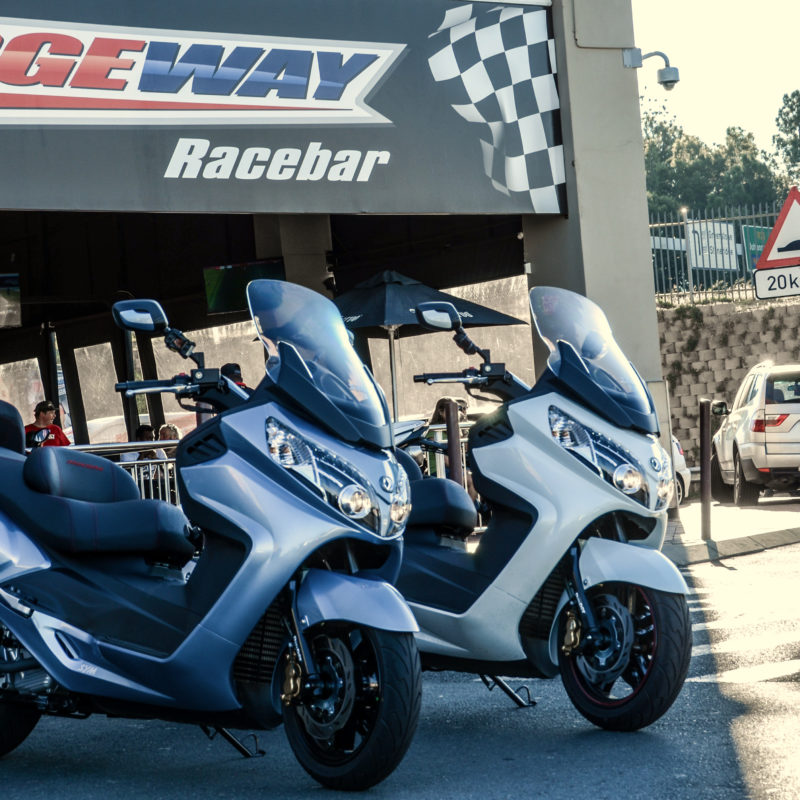 They are grand and majestic to behold 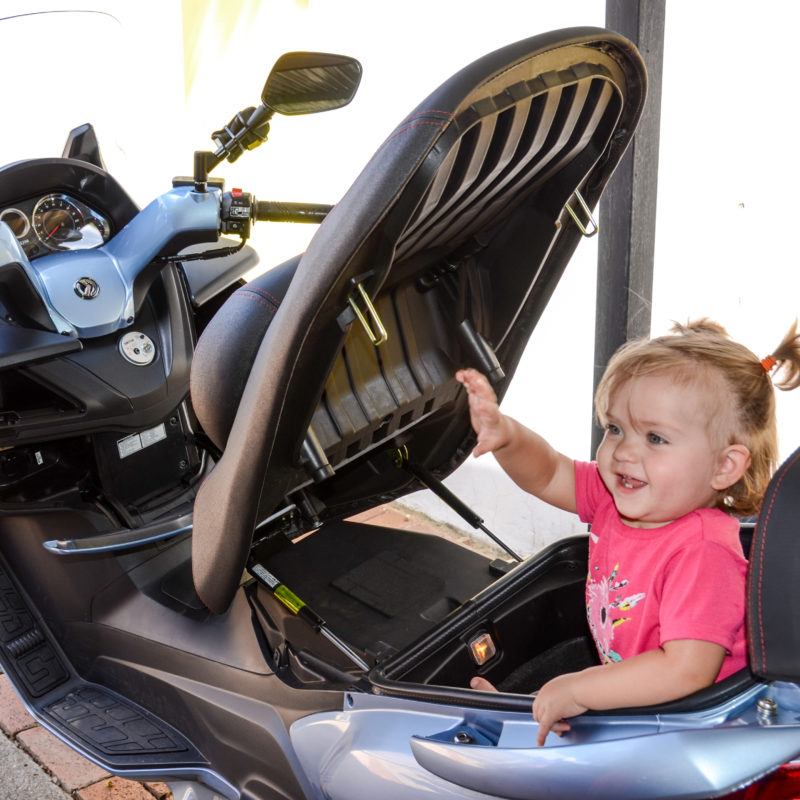 The boot on the MaxiSyms is massive. Enough to take a passenger perhaps, as young Leia demonstrates.
Tags: hyperscooter, Maxiscooter, MaxiSym, Sym, taiwan