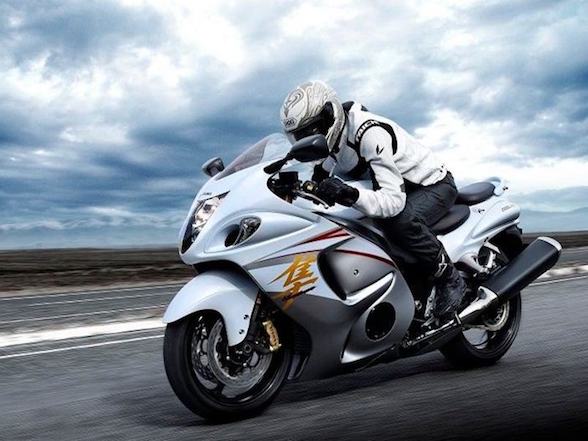 I’ve just spent a week with a bike that has for many years been widely regarded as the fastest production bike on the planet. The natural order of things dictates that I should open this review with tales of derring-do, huge speeds, blurred vision, time travel, that sort of thing.

But I’m going to buck the trend this time, and talk about just how damnably nice is Suzuki’s Hayabusa.

But first, a bit of history. The Hayabusa first appeared back in 1999, and was Suzuki’s response to Kawasaki’s ZX-11, and then Honda’s Super Blackbird. Honda had just robbed Kawasaki of its ‘fastest bike’ title, briefly, because an increase in capacity for the ZX-12 snatched it straight back, and so began the war to reign supreme in this new top speed class of hyperbikes. 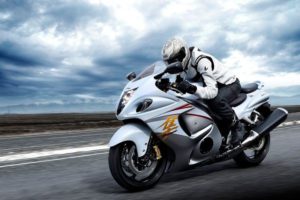 And then Suzuki entered the game with its GSXR 1300R Hayabusa, a monstrous looking thing that seemed as much influenced by Manga cartoons as it did any wind tunnel imperatives. The Busa, as it almost instantly became known, romped to a recorded 310km/h, leap-frogging it straight to the head of the top speed lists for a standard production bike.

And then, just as the safety-nerds in Europe were engaged in a full frontal assault on ‘irresponsible’ bikers, the Japanese manufacturers warded off impending legislation with a voluntary agreement between themselves to cap their bikes’ top speeds at 186mph (299km/h).

What initially seemed something of a spineless capitulation to the Brussels bureaucrats now seems a clever move. Whether your bike does 300 or 330km/h is pretty much irrelevant, since you can’t find any road or track that will let you experience the difference.

Having not mentioned anything about power, those manufacturers were free to continue developing bikes that now make those original speed machines look positively tame. Consider that all the current 1000cc superbikes now make the same horsepower as the Hayabausa and its ilk. They rev harder and higher, and crucially they tip the scales up to 50kg lighter. In the real world they are faster than the supposed hyperbikes.

17 years after I first rode a Hayabusa, it has changed remarkably little, but the world around it has moved on. This would usually sound the death knell for a bike, but the Busa has endured, growing a devoted fan base and contrary to normal sales cycles maintaining and even expanding its market share.

By all accounts it is also the most customised and tuned of all sport bikes. With an engine that is legendary for its reliability, it has formed the basis of countless drag bikes and top speed record holders. Bolting a turbo to this four-cylinder lump is as common as fitting a loud exhaust to anything else, and the results are spectacular.

A quick google search for hot Hayabusas will show you just how extreme this modification craze has become, and yet to ride the standard bike is to experience a creamy smooth, quality big bike that is undoubtedly fast but is also surprisingly grown-up.

That’s not a line that most Hayabusa owners will enjoy hearing, their chosen bike has after all earned a reputation for being a bit of a beast. A speed demon, a horsepower brute that takes no prisoners. 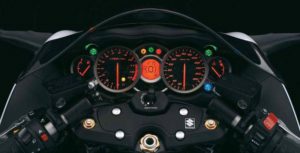 And yet the riding position is comfortable (given it’s a sport bike) and pillion accommodation isn’t too bad either. The instruments are analogue and ever so classy, even the paintwork which was so often lairy in the past, now has a restrained set of colour options which better reflect the Busa’s, erm, ageing demographic.

Given its size and weight there’s something of a surprise to the way the old bus handles, too. The suspension does a grand job of providing a comfortable everyday compromise between comfort and cornering, and you’d only ever feel the need to fiddle with the fully adjustable suspension if you were carrying a passenger.

The engine is always going to be the abiding memory of any ride on the Busa, the combination of uncannily smooth power delivery, huge amounts of torque and a faultless fuel injection system results in a magic carpet ride of improbable acceleration and effortless top speed.

My co-presenter on The Bike Show, Harry Fisher, questioned the very existence of bikes like this, on the grounds that you can never experience what they can really do. He has a point, but ignores the fact that as a by-product of the headline numbers the Hayabusa delivers the kind of easy midrange performance that only comes with serious displacement.

I would have liked an empty runway for a day, but instead I got a week in Gauteng, potholes, endless traffic and the occasional deluge of rain. All conditions that should make a hyperbike that doesn’t come with traction control about as useful as a chocolate brake calliper.

Contrary to all expectations the big Suzuki was a breeze; comfortable, rapid and above all remarkably easy to ride. All elements that go to make this living legend something of a surprise all-rounder. A new one is apparently in the pipeline for 2018, but I can see why until now they’ve been loathe to tinker with what is obviously a winning formula.

This article is courtesy of The Times and The Sowetan newspapers