The GSX-R 1000 R is the trick model in the illustrious Suzuki Gixxer range. Best-selling author and superbike nut Peter Piegl gives one a go.

Three years ago, this would’ve been the bike for me. A simple, plug-and-play machine that you jump on and ride with confidence. The problem is I’ve become a wanton hussy; a strumpet… an adrenaline slut.

I’ve gotten used to manhandling my machine – so much so that I keep expecting a gaggle of flush-faced cherubs to pop out of their fluffy home in celebration each time I ride. They look down at me with their seraphic smile as I emerge from an S-bend; wheezing, elated and sporting a chubby.

I want to have a near-life experience every time I ride but unlike my psychotic bike, this Gixxer just doesn’t seem to want to kill me. It plods along through the first few gears, head down in supplication, doing everything in its power not to upset you.

I wrote these words on the first day I got the 2017 Suzuki GSX-R1000RAL7 because it’s exactly how I felt. I’ve ridden my personal bike for the past three years and have learnt to work around its eccentricities and shortcomings; especially in the handling department. But one thing I was always assured of after a ride was that my adrenal gland would be left dishevelled; little raisin-like adornments squatting atop my kidneys. 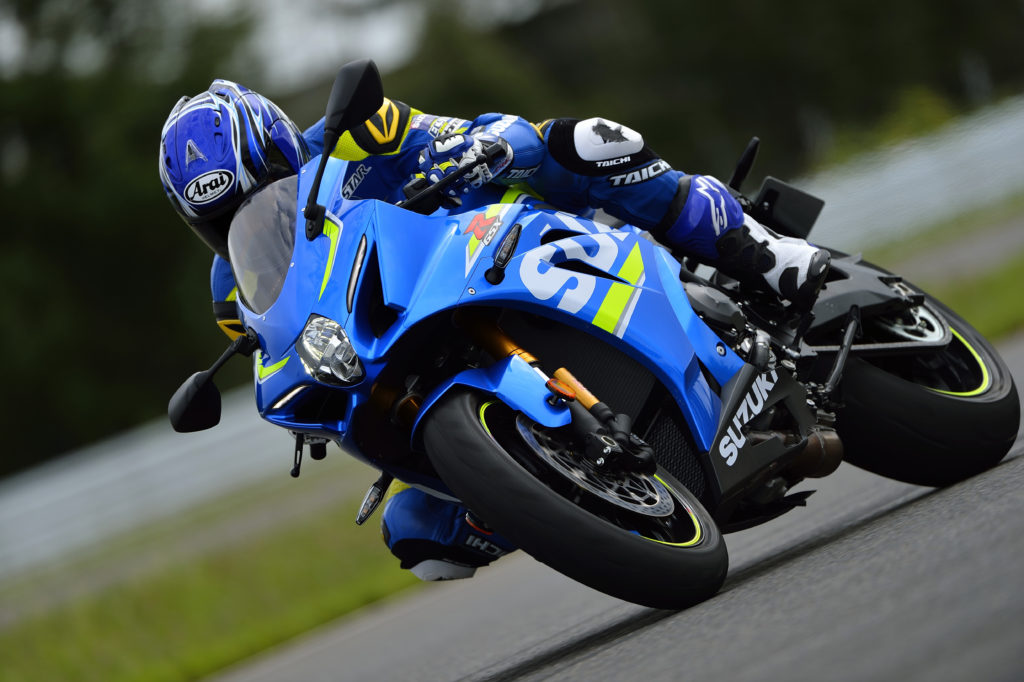 So initially, the Gixxer came across as sorrowful and downtrodden in the lower rev range. Having subsequently racked up some 400km on the blue Asian, I’m happy to report that wringing its neck seems to have loosened it up a bit. And I’ll concede that my bike also felt like a kloosterkoek when it had just 2 800km on the clock.

The Gixxer though, does remind me of a Japanese accountant – demure, gentlemanly and dependable. But when there’s Sake and karaoke on the agenda, things start to get funky after nine. Nine thousand rpm that is. Suddenly it’s all Dance Dance Revolution on amphetamines as your sphincter tightens while your pupils dilate and the surroundings melt into an expressionists’ painting.

The problem is that our accountant doesn’t know when to stop. Or rather, he can’t. And that’s because these brakes – emblazoned with the hallowed name of “Brembo” – are about as useful as tits on a T-Rex. You do get used to grabbing a handful of lever and pumping the far-more effective Nissin rear callipers and that’s when you realise: this bike is simply unflappable.

It’s in the corners where the imperturbable GSX-R1000RAL7 comes into its own. The weighty front-end combined with those sublime Showa Balance Free Forks deliver some of the best, and most luxurious, handling you’ll ever experience on a 1000cc. It’s also in no small measure thanks to the unobtrusive and exalted traction control. My Gixxer was shod with Bridgestone Battlax rubber that had been ground down to the nubs and yet it never set a foot wrong. 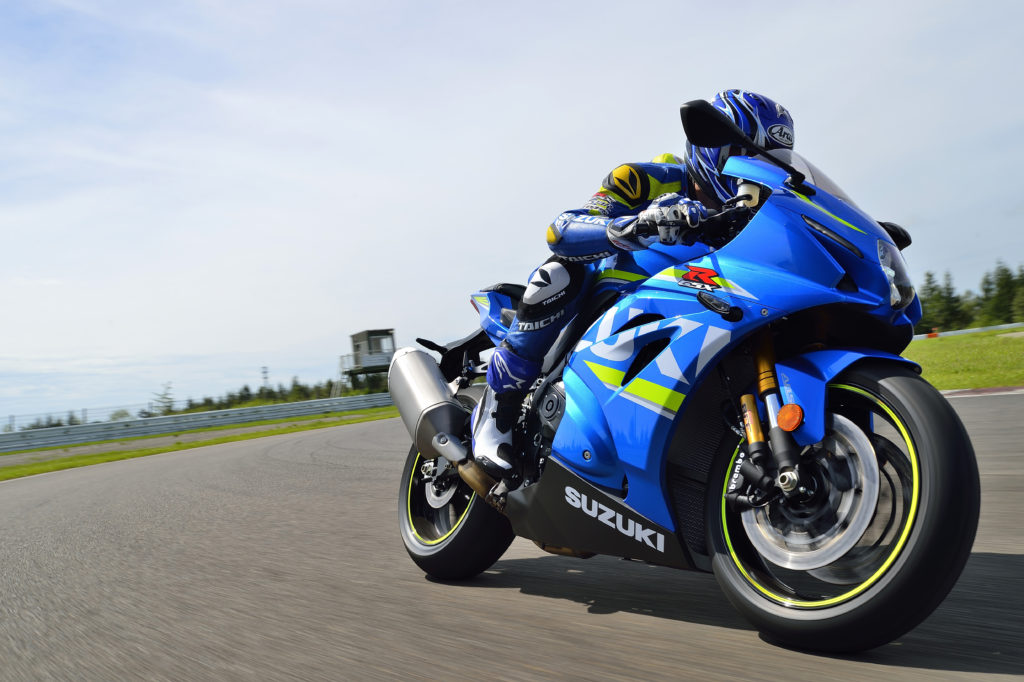 But there is, however, a fly in the sushi. It’s the throttle. Or rather the mapping. I fear that Michael J Fox was commissioned to write the software because it’s as skittish as a bulimic at an all-you-can-eat buffet. It’s snatchy in A-mode (which is a track setting) but in B-mode, the throttle response is cut by 50% so you’ve got to put in more wrist action than a fourteen-year-old on Viagra. C-mode is for commuting (the equivalent of Rain mode on other bikes) and it makes sense I guess, given that superbikes are traditionally not all that kosher in traffic. But who’s ever gonna ride a neutered superbike, even while slipping between cars? I certainly don’t. None the less, you will get used to the throttle. By day five, I barely noticed it.

The ergonomics of the Gixxer are really good. You can punish it all day long and still feel as refreshed as if you’d just had a spearmint enema. Or so I’ve heard… Initially I felt the dash was a bit overwhelming, with its smorgasbord of information, but it’s actually pretty good (visibility in broad daylight was sterling). And why oh why can Suzuki include a petrol gauge in their dash but no one else seems to be able to achieve this seemingly impossible feat? I’m not talking about a “kays to go” – well it has that, too – but an honest-to-goodness fuel gauge! Based on how kak you ride, the computer will always over-estimate when you’ll be left stranded by the side of the road, but a gauge is like a stay of execution.

Next up is the pillion experience. According to the buxom blonde nestled in my slipstream, the sliver of seat is surprisingly comfortable. The footpegs however, are more slippery than an ex-president facing corruption charges. But they were good in corners as she could load them thanks to their height.

Now let’s address the elephant in the room. We’ve all heard of the recall on the Gixxers due to false neutrals (from first to second) and I can tell you that it’s no biggie. Yes, it happened to me but it happens on my bike too. The GSX-RR also had a weird anomaly when changing from fifth to sixth, where it felt like power was cut, but that only happened once or twice. In any case, Suzuki are going to change the ECU so that’ll solve that problem. And all manufacturers have recalls so let’s not get too critical here.

Which brings me to my list of gripes – and let’s bear in mind that in this form, the Gixxer R commands a weighty price tag of R275,000 (R239,900 for the non-R version). At this price point, I expect biblically-proportioned accoutrements and the Suzuki falls short in a number of ways. I’ll leave to you to compare what you get for the Gixxer versus other options on the market… 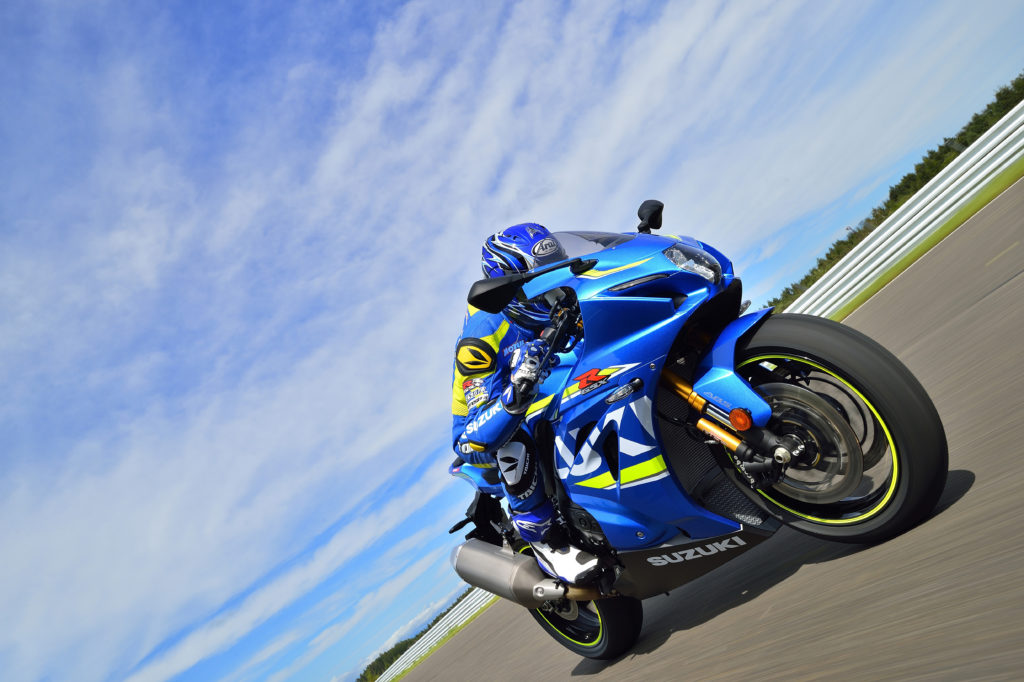 That abysmal canister looks like a forlorn and abandoned conjoined twin. And don’t give me that Euro 4 crap – all manufacturers have to comply but they’re not making pipes that look like a club foot. For me, the brakes alone would be a deal breaker or they’d be the first thing I’d replace. Oh, and add braided hoses to the shopping list because you don’t get those either. Or cruise control. Or heated grips. And the rear shock has to be manually adjusted. And those mirrors are complete rubbish; they start vibrating virtually at pull off, making you feel like you’re already three double Brandy and Coke’s in. And lastly, I’d say the Gixxer needs a change of sprocket to offset the dearth of action from pull-off. But maybe that’s just me.

If the above sounds overly critical, well that’s not how it was intended. It’s just a lot of money to spend on a bike that needs upgrades. Canister aside, the brakes have to be addressed. How can you ride a superbike with brakes as squishy as an octogenarian’s mammary? With great power must come great brakes – it’s the law. Or it should be!

And yet the GSX-R 1000 R could actually be construed as perfectly imperfect. If you can overlook these shortcomings (and some might not even see them as such), what you’ll get is a bike that’ll reward you with near-intuitive handling, comfort, excitement when you hit the powerband and that legendary Suzuki reliability. It’ll be your predictable partner as you jet off to Unsurprising Island, where you can sit and drink alcohol-free daiquiris while discussing the alarming dip in the stock market. And that’s really not a bad place to be.\