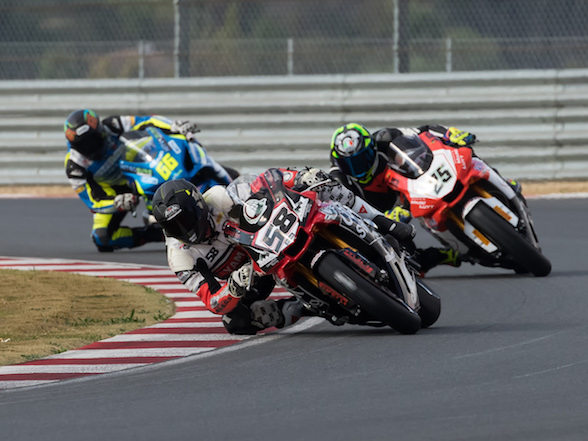 Clint Seller (King Price Extreme/Bikefin Yamaha R1) continued his run of pole positions when he set the quickest time in Friday afternoon’s SuperGP qualifying session. He was joined on the front row of the grid by Michael White (Consortium Shipping/Ridgeway Sports Bar Yamaha R1) and Morne Geldenhuis (NCA Plant Hire / Hi-Tech Racing Yamaha R1), who was making a welcome return to the track after recovering from his crash in Cape Town. Daryn Upton (Uncle Andy Racing Suzuki GSXR 1000) headed the second row of the grid with Gavin Upton (Turn Skill Engineering / Shop #74 Yamaha R1), the first of the SuperMasters riders, alongside him in fifth. Beau Levey (Motos KTM Klerksdorp RC8) rounded out the top six.

In Saturday’s opening race Seller grabbed the lead from the start with White and Geldenhuis right behind him. Just as it looked like Seller was going to disappear into the distance, the red flags came out as both White and Geldenhuis had fallen in separate incidents. Both were able to remount and make it back to the start grid, although White did have a fairly serious injury to one of the fingers on his right hand. At the restart, Seller again grabbed the lead ahead of a three-way tussle between White, Geldenhuis and Daryn Upton. Seller was able to control things from the front and slowly extended his lead, taking victory by seven seconds. Despite his injury, White emerged at the head of the chasing group to take second ahead of Geldenhuis. Upton claimed fourth with Dylan Barnard (Shop #74 Kawasaki) getting the better of a race-long duel with Levey to take sixth. Levey also claimed the SuperMasters honours after Gavin Upton suffered arm pump when he looked well placed to take the win.

Race 2 took place on Sunday afternoon and again it was Seller who grabbed the lead, but a software glitch caused uneven power delivery from his Yamaha. The first time this happened, it took Seller by surprise and he ended up sliding down the road. He was able to re-mount but had dropped almost to the back of the field. He was able to ride around the problem with his bike, but fourth place was the best he could do. While Seller was working his way through the field, White was holding off first Geldenhuis and then Upton at the front of the pack. Despite the pain he was in, he managed to hang on to take the win with Upton and Geldenhuis joining him on the podium. Levey got the better of Barnard this time to take fifth and again claim the SuperMasters win.

White has extended his championship lead over Seller to 17 points with Daryn Upton cementing his hold on third in the standings 21 points behind Seller. 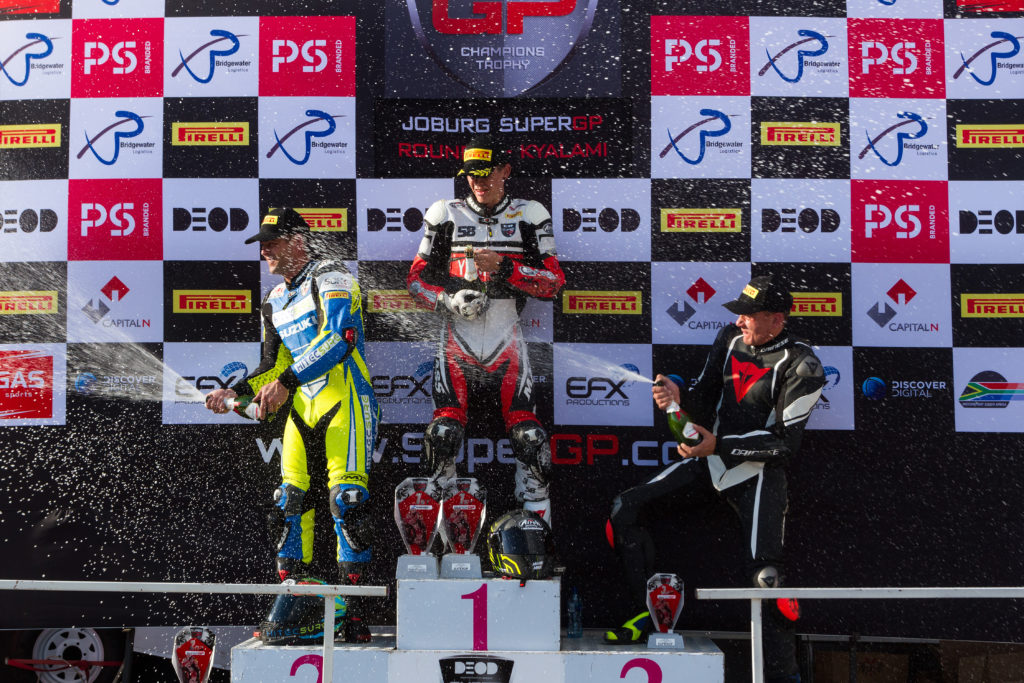 Baker and Boshoff were left to fight it out at the front of the field after Jonas crashed out in the early stages of the first race. There was almost nothing to choose between the pair as they regularly swapped positions until Boshoff also crashed out with just two laps to go, handing Baker the win. Behind him, Bester and Staffen were engaged in their own battle, crossing the line in that order to join Baker on the podium. Schultz came home in fourth ahead of Gehlig, whose fifth place was his best ever Super600 finish. Dian Nelson crossed the line in sixth on his TRD Motorcycles Yamaha R6.

Baker and Boshoff resumed their battle in the second race, but this time Baker was able to open a gap which he could manage to the flag. Boshoff had to settle for second with Jonas, competing in his final race on the national stage, in third just ahead of Bester. Schultz and Staffen rounded out the top six.

Baker’s great result sees him leapfrog both Boshoff and Jonas in the championship standings. He now holds a 24-point advantage over Boshoff with Jonas a further nine points back. 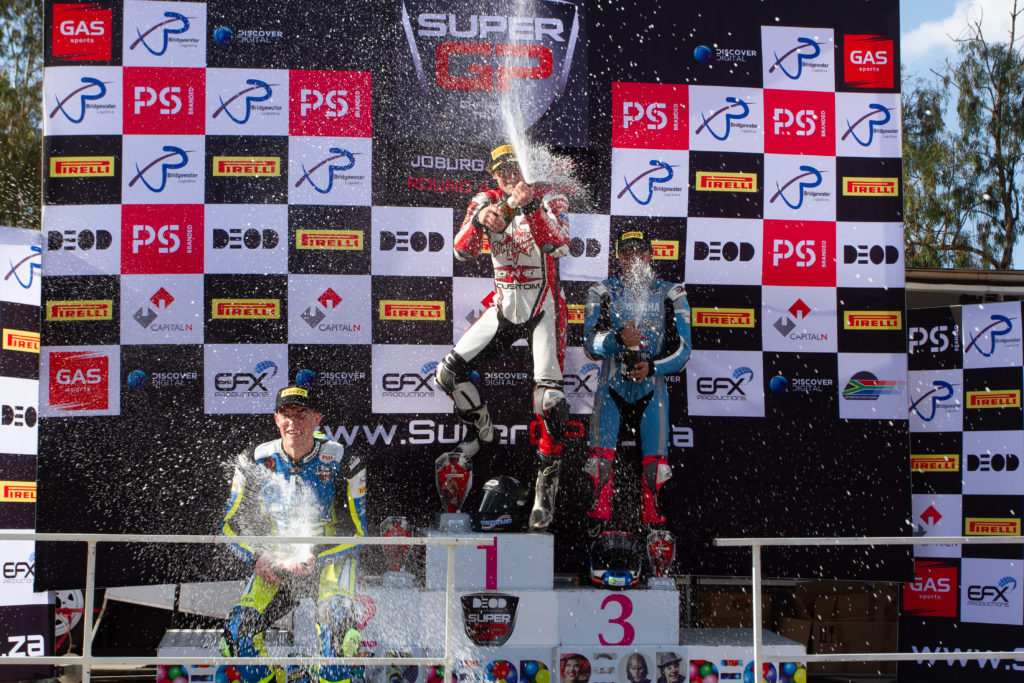 The BOTTS category joined the SuperGP riders for another round of their regional championship. In addition to his SuperMasters win, Levey also took the BOTTS win in the opening race. He was followed over the line by championship leader Thomas Brown (REHAB Racing Ducati) and James Harper (Moto Uno Ducati). In race 2, Levey was again the winner with Harper getting the better of Brown this time.

The SuperGP Champions Trophy now takes a winter break before the next round which is scheduled to take place at the Aldo Scribante circuit in Port Elizabeth on 25 August.