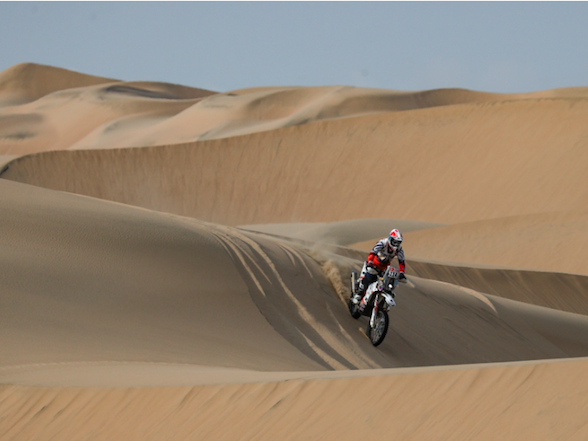 Story: ZC Marketing
South Africa’s National Cross Country Champion Ross Branch has been crowned the fastest Rookie at the 2019 Dakar Rally in Peru. After 10 of the most gruelling stages the desert race has ever seen, Branch finished amongst the world’s best in 13th overall.

Having replaced his entire engine on stage two, navigated through unfamiliar South American terrain like ‘fesh-fesh’, and acquired new navigational skills unique to the Dakar; the rider from Botswana crossed the finish line on 17 January.

Branch has dreamed of conquering the Dakar since he was six years old aftering watching riders pass through Namibia on the old Paris Le Cape race, and vowed that he would someday be one of them. He has since spent the last 26 years refining his skills as both a Motocross and Cross Country rider.

While he is affectionately known as the ‘Kalahari Ferrari’, even those deserts couldn’t prepare Branch for the sheer enormity of the dunes in Peru.

“The dunes are honestly like nothing I have ever seen before. There were some scary moments out there – I don’t think spectators could ever fully comprehend how big they are from TV,” said Branch.

To place in the top 20 at what was described by 2019 Dakar winner Toby Price as the “toughest rally he’s ever done” is an incredible feat. Dakar Rally director Etienne Lavigne explained, “We built more technical and difficult stages this year because of the type of geography of sand and dunes in Peru.”

This is hopefully the start of a long-term career in Rally racing for Branch, who has done everything he possibly can to potentially secure a factory deal.

“I honestly can’t put into words what this moment means to me – riding across the finish line of the Dakar Rally as the first Rookie! It took so much to get here, but this moment makes everything worth it,” enthused Branch.

KTM South Africa’s Managing Director, Franziska Brandl, gives a closing comment after supporting Branch in Peru for the past ten days: “Seeing Ross cross the finish line of the 2019 Dakar Rally was a truly special moment. When Ross came to me with the idea of racing Dakar two years ago I gave him my full personal support. He worked extremely hard towards this and rewarding us and himself with a 13th place overall and win in the Rookies category is more than what we ever could have asked for. He rode a smart race and rubbed shoulders with the world’s best. Rally is sure something that could prolongue his racing career and best of all, although it was hard work all along, he truly enjoyed every second of this experience which makes it even more rewarding. To say I am proud is an understatement and knowing that the whole of Botswana and South Africa supported him all along still gives me goose bumps. Thank you to everyone that helped him reach his dream, from moral support to all the sponsorship received. This sport is something truly special and a race with the magnitude of Dakar shows us how closely knit this community is. I salute you all!”