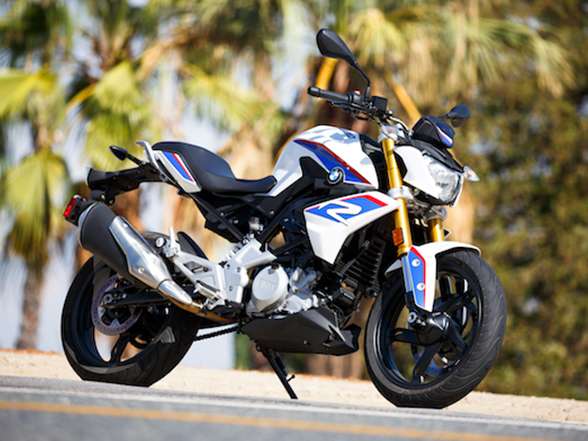 At last, it’s here. The G310R has been big news ever since BMW announced it 400 years ago (at least, that’s how it feels). Obviously it is big news – BMW has pretty much already conquered the above 500cc market, so let’s give the small bikes a go. This certainly makes business sense – the global yearly market for bikes above 500cc is 850,000 units. The yearly market for less than 500cc is many millions. Understandably, BMW wants some of that pie.

They have partnered with Indian motorcycle giants TVS, a company that builds more than 2.8 million motorcycles a year, and have a dedicated production line especially for the blue and white propeller brand. Obviously the Germans have done all the clever engineering and design work, and you can be assured that a German is standing behind the TVS workers saying “you vil build zis prroperly, ja!”

And so it is at last in South Africa, and all accusations from social media like “it is going to have Indian build quality” and “it will be slow and boring” will now be answered.

First of all, it looks magnificent. The photos do it justice, real life does it even more. The design is based on that of the S1000R naked superbike, and with all the bikes lined up in the larniest bit of Melrose Arch, it took a second look to tell the difference between the 310 and its four-cylindered brethren.

The only small spoiler is the handlebar switches that are bulky, a bit unimaginative and look like something found in the toddlers section of Toys R Us. And that is the only criticism. The plastics are aggressively styled, the finish on tank is fantastic and the frame and engine look as though they come from Germany’s best factory floors.

That’s the impressions while parked. Let’s go for a ride.

People have various views of Jo’burg. Some think of it as nothing but a concrete blotch in the pristine Highveld grasslands, others will see nothing beyond crime and greed. Of course, mostly these are people that don’t actually live in South Africa’s biggest city, but on this day even they would have to agree that it is damn beautiful.

Even in the deep throes of winter, when many of the leaves have given up the ghost and joined their kin in the compost heap, these streets still weave through a lush urban forest, passing divine mansions, climbing steep hills with panoramas of the metropolis and finding new twists in the road that will rival some the greatest tracks in the world.

And if you’re going to do a city joy ride like this, you need to be on something light, nimble, easy and lively. Something like, and this is a curious coincidence, a G310R. Like all bikes in this class, the G310R is tiny. Not just low to the ground, but slender, short and nippy. The suspension feels surprisingly plush and stable, while the seat is cosier than even some tourers. You can fit this bike into almost any space, throw it into any gap and, yes, even have the power to get out of a sticky situation.

It has a 313cc, single-cylindered, liquid-cooled, fuel injected motor pushing 34 hp at 9,500 rpm and 28 Nm of torque at 7,500. You might notice that the peak performance figures are at relatively high revs, and that’s because at high revs is where this bike really thrives. It isn’t too slouchy at lower rpms (though it does stall fairly easily if you are not paying attention when pulling off), pulling calmly and smoothly, but at about 6,000 rpm it shouts “Sparta!” and screams up to the 10,500rpm rev limiter.

Screams is a good word to describe the noise of a small single at full chat. I’d say it is a trait of only the G310R, but in truth all the 250/300 models do it. They may not be as fast as some of the midrange models, but the speeds they do achieve are done with so much gusto and theatre that 100km/h on a 300 feels like 300km/h on a 1000cc superbike.

This brings us to a small concern – the opposition is a fair bit more powerful than 34 horsepower.

The problem and the solution

The KTM Duke 390 is 43hp and the Kawasaki Z300, that is due to make a return to South Africa in September this year, has 39hp. That doesn’t mean that the BMW is necessarily slow. It weighs a ridiculously low 158 kg and we saw a very easy 160 km/h before we hit traffic.

The others might be a bit faster, but where the BMW trumps them, however, is in its price. The KTM is R69,000 and the Kawasaki is expected to be similar when it returns, but the BMW G310R, with its added bonus of reputable dealers, back up, service and probable low rate of depreciation, is just R63,000.

And so we must conclude

BMW has had record sales year after year, even when the Japs and the Americans have had to tone down their operations massively. Understandably, they want their growth to continue. Currently, they are selling around 150,000 units per year. By 2020, they are aiming to top 200,000. They are doing this by two means – an increase in their number of global dealers from the current 1100 to 1500, and to penetrate new markets like this one.

KTM is currently the largest bike maker in Europe. Much of this is down to their off-road/motocross domination, but what has really pushed them over the success edge is their Duke 125/200/390 range. And now BMW has jumped in head first with this, the G310R.

You would have to be a truly bad gambler to bet on them not succeeding.