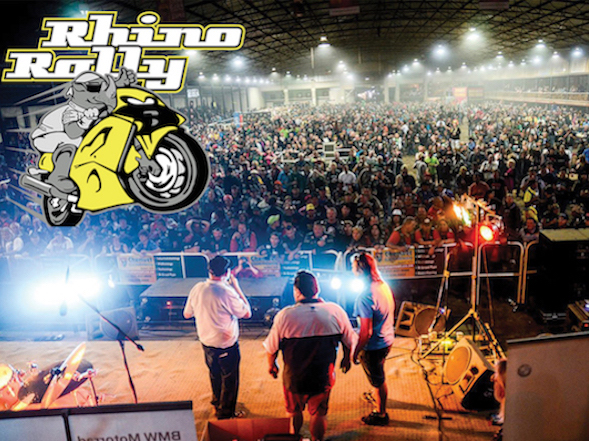 Every year we say that this rally gets better and better every year.
And it does.

Bands include Clint & Co, Black Water, Backbone and Axe with the irrepressable Herbie the DJ. There will be a mass ride, stunts, a 240metre wheelie street on site and, for the first time ever, a drag race machine with two bikes side by side dicing each other over distances including a quarter mile (400metres) just like the real thing and with dyno-type performance measurements. See the video below:

Cars will enter for free, like the bikes, with only occupants paying entry fee. Yes, park just about anywhere, most park usually next to their tents. The enlarged site is huge.

Steven and the gang from Skydive Parys will again be there offering tandem skydives into the rally site. Tel: 072 303 9140

There are the ever-popular stables, with lights and locks on the doors will be

Please note that the campsites do not have electricity, but the site itself has an independent caravan site with electricity. Normal R250 Rhino entry fee at gate still applies.

PLEASE note that this caravan park is on site but is not run by the Rhino Rally.

From Pretoria/Johannesburg go along the N1 towards Kroonstad/Bloem for about 90km and take the Parys/R59 slip road to the left and turn right onto the R59 to Parys.

In Parys follow the meandering main street right/left through town towards Vredefort and, near the end of the town, turn left into Allenby Road.

The Rhino Rally was founded in 1976 and it’s well-earned slogan is “Everyone Goes To The Rhino.”