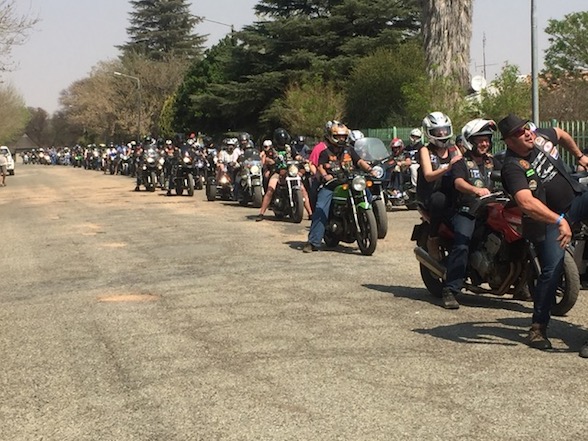 The 36th Rhino Rally took place once again in the popular town of Parys situated along the Vaal River 120km south of Johannesburg, with rally founder Simon Fourie once again at the helm. He – the unfortunate father of The Bike Show’s Donovan Fourie – despite turning 73 years-old this month, is looking as fit and enthusiastic about rallies as ever: “Every year we say that this rally gets better and better and, despite the expected drop in numbers, it did.”
Bands included Clint & Co, Black Water, Backbone, Templar Funk and Axe with the irrepressable Herbie the DJ. There was a mass ride on Saturday, Brian Capper doing stunts on Saturday afternoon, the usual  240 metre wheelie street on site available the whole weekend and, for the first time ever, a drag race machine with two stationary bikes side by side, on joined dynamometers, “racing” each other over distances including a quarter mile (400 metres) just like a real drag race and with performance measurements shown on a screen just like at professional drag racing venues.
A really rocking good time was had by all, as the gallery at the bottom of this page shows.  The drag race machine was particularly popular, especially this father/son race:
The gallery – click on the photos to enlarge them: