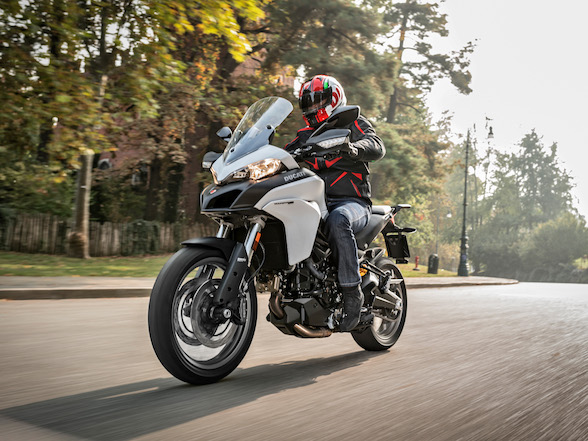 The not so baby baby

Bigger is better, so we are told, but is it possible that the opposite could be true; that less is more? We have become obsessed with the idea of size and power; it wasn’t all that long ago that 100 brake horse power was seen as excessive in a motorbike and yet, here we are today with outputs pushing 200bhp and that’s entering the realms of being faintly ridiculous.

With power such as this, the bikes need more and more increasingly complex electronics to rein it all in, not to mention a new understanding of the definition of restraint on the part of the rider when twisting the throttle. It’s all getting a little out of hand and, when all said and done, where can you use all that power anyway? 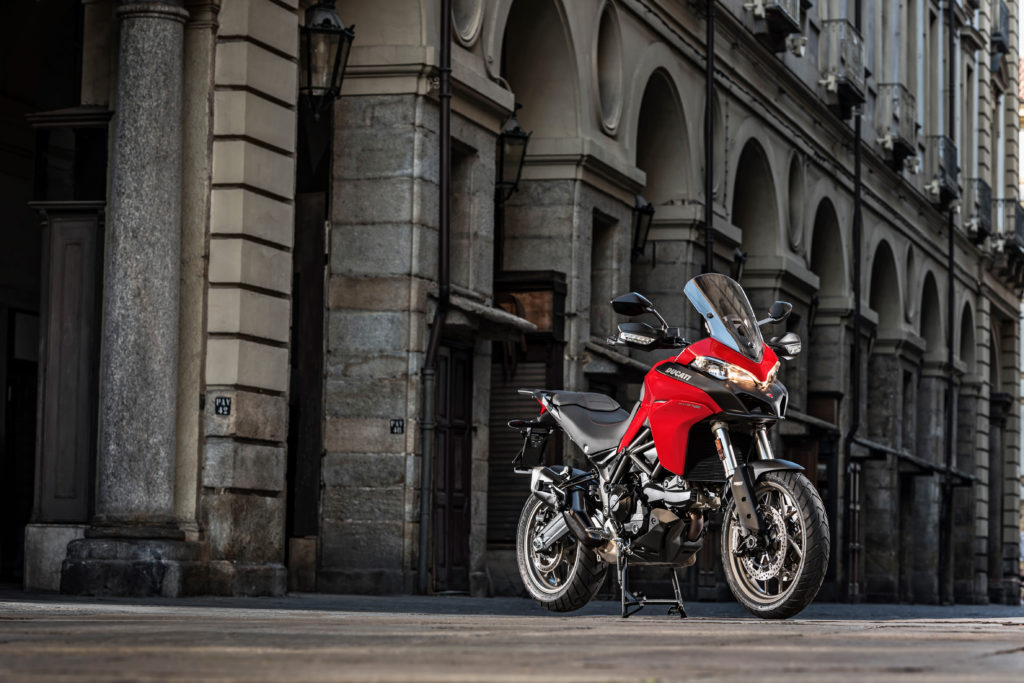 The bike we have here is Ducati’s ‘baby’ adventure bike; the Multistrada 950. It’s lost a bunch of cc’s and around 47bhp but does that mean that it is 47 times worse as its bigger brother, the Multistrada 1200?

Well, of course not! Look, it’s still not exactly underpowered, with 113bhp and 96Nm of torque; more than enough to get you into trouble and, incidentally, still nearly 20bhp more than Honda’s Africa Twin. That’s the problem with the way of thinking these days; that anything with not much horsepower can’t be any good. That’s bollocks; the Triumph Street Scrambler pushes out only 55bhp but is fantastic fun to ride; we all loved the Suzuki SV650, which pushes out 75bhp; the Ducati Scrambler…well, you get the message.

It’s the same with the Multistrada 950; there’s plenty of fun to be had with this motor; it revs so freely and smoothly and, yes, it might lack the insane punch that 160 or 200bhp can give you but, let’s face it, not that many people ride bikes with that amount of power so, to them, 113bhp in a fantastic chassis can give them all the thrills they want. And, if you’re honest with yourselves, even if you have a very high opinion of your riding ability and you are genuinely a fast rider, it’s plenty for everyone.

The 950 sheds a paltry 5kgs (to 229kgs wet) over the 1200 model and loses the lean-sensitive IMU acting on the ABS and the semi-active suspension along with it. What remains in the suspension department is fully adjustable front and back; you’ll just have to do it yourself and possibly not the thousands of times a second the computer can do it….

There are four riding modes including two that cut power to 75bhp. Three levels of ABS intervention, as well as completely off and eight levels of traction control, all controlled by new switchgear which has been beautifully designed and finished. Radial Brembo callipers up front keep things under control.

Wheels are cast alloy 19-inch front and 17-inch rear items, although spoked wheels are available as an option. Apart from changing the looks slightly, I can’t think of a single reason why you would need to opt for them; this is an adventure-styled tourer, not an adventure bike; surely no-one in their right minds is going to look at this and see themselves conquering Africa or South America on it? (Just watch someone go and do that now I’ve said that…) There are so many other choices for that kind of riding that the Ducati doesn’t have to try and compete.

But that’s all right; adventure styling is in vogue right now and if it produces bikes such as the Multi 950, then I’m all for it.

You sit very much ‘in’ the bike, with the tank and front bodywork rearing up in front of you so it can feel a little large and intimidating both from alongside and on board. But, in fact, the seat is commendably low (840mm) and the protection forward makes for a really relaxing fast touring speed. If anything, taller riders might feel a little cramped as the foot peg position does tuck your feet up under your bum, or so it feels. The bars are an easy reach and, overall, it is an easy bike to get comfortable on, with not too much weight on the bottom of the spine which can sometimes happen with higher bars.

It has perfect road manners, as you would expect from a Ducati and the overall package is really impressive; everything works together seamlessly and gives the impression of a bike that Ducati has taken a lot of time over to get right.

If anything, it could be the perfect all-round bike; it’s Italian and a thoroughbred so that’s the desirability factor licked. The fashion might be for adventure bike styling but, if it looks good and is practical at the same time, no problem. It’s great on the daily commute, brilliant for some weekend fun, comfortable enough for two-up long distances and you could even have a ball at a track day. And, at the end of it all, if you are faced with a dirt road, then it will handle that, too.

For me, the 950 is so much more bike than the 1200 because I can use a higher proportion of the available power more of the time in the real world riding-conditions we are subjected to. By having less, it becomes less intimidating at the same time; it’s easier to manage. Ducati’s big buzz-word at the moment is ‘accessibility’ and that’s what the 950 has.

The Ducati name still holds the promise of exotic engineering and that’s a promise that the 950 can, and does, fulfill. We’ll call it the baby Multistrada but, in actual fact, it’s a great bike in its own right and doesn’t need to play second fiddle to any other bike.

Ducati are making seriously desirable bikes these days that can hold their heads up in any company when it comes to reliability and practicality; not always something that could be said throughout the company’s history. But, I’ll tell you what; it feels fantastic saying it now.

Is there an options list? Yes, go to www.ducati.co.za

Watch our road test of the Ducati Multistrada 950 below followed by an image gallery: