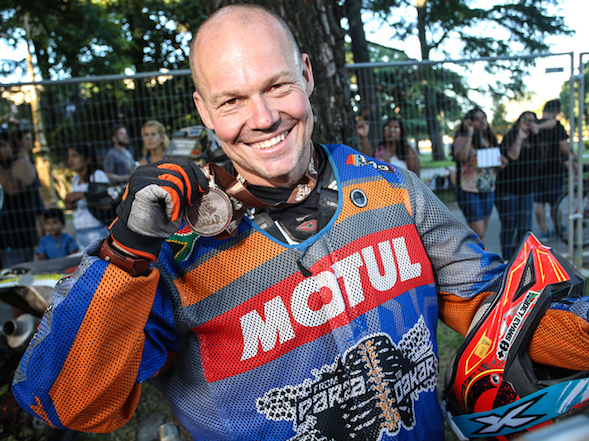 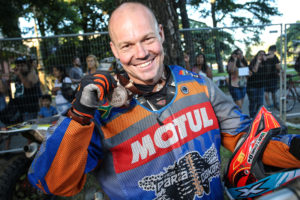 By now, Joey Evans’ story is familiar to many but it’s a story that loses nothing in the re-telling. It’s a story of unbelievable courage and achievement in the face of odds stacked so high against him that many would have given up. Faced with almost total bodily paralysis, Joey came through that by the most miraculous fortune and went on to fulfil a long-held ambition by competing in the world’s longest, most dangerous, most arduous rally, the Dakar. At every stage was the opportunity to simply give in and say ‘enough is enough’ and no-one would have blamed him; but he didn’t and he sits here today as a testament to a ‘never-say-die’ attitude.

In a further feat of achievement no less impressive, Joey has now put his story down on paper and released a book about his life and his adventures not only through injury and recovery but also in the Dakar Rally at the beginning of this year. 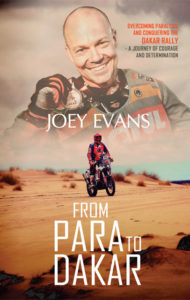 At first, alarm bells ring; he is a hero and obviously a very skilled rider with determination levels that mere mortals such as you and I could only ever hope to imagine, but skill in one field doesn’t necessarily translate into skill in others and when it comes to writing, this is a skill that has defeated many to the detriment of their stories.

However, a few pages into the book and happily one quickly realises that Joey’s skill with the written word equals his skill on a bike. The story is very well told and is very clearly Joey’s own ‘voice’. Having interviewed him several times on The Bike Show and listened to his talk on his Dakar exploits, it is obvious that he has the knack of telling a good tale and he has put it on paper in the same gentle, easy-going manner that is his personality.

His publisher has written that she had the same misgivings of his writing ability but that by the end of the book, she felt that she was standing alongside at the Dakar, cheering him along and this is exactly the feeling you do get when reading this amazing tale. It is such an incredible story of triumph over adversity made all the more real by knowing that it was written by the man himself; no shadow of a ghost writer here. 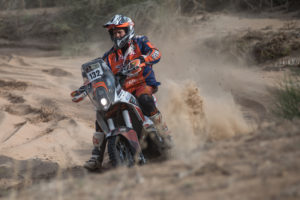 This book touches on several different themes with which one can identify; the all-embracing passion for motorcycling, the dread of a life-changing experience, the coming to terms with a completely new way of life, the joy and pain and sheer hard work of rehabilitation, the realisation of a dream, the admiration of someone doing something that not many of us have the skill to do and the love and support of an amazing family.

Despite everything that Joey has been through, this is an uplifting story and one that entices you back to its pages time after time. Who knows by what miracle Joey was able to walk again after breaking his back but the fact that he made the most of the second chance he had been given makes for a cracking and inspirational story.

It could be the best R265 you spend on a book this year.

To win a signed copy of this book, click here.