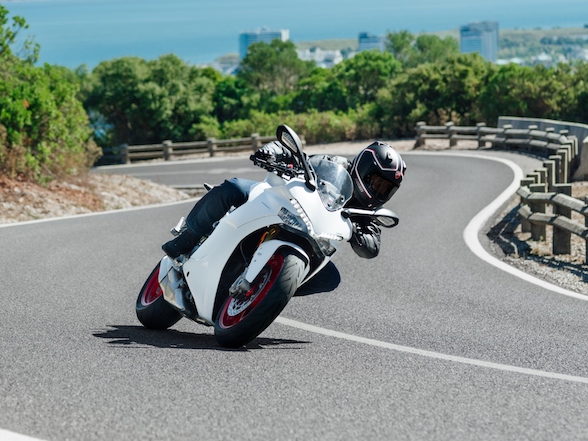 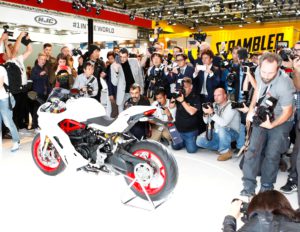 Think Ducati, and you’re bound to summon images of fiery red sport bikes. No wonder, because Ducati has made its name with world championship victories in World Superbikes and MotoGP.

But there is so much more to Ducati than that; the iconic naked Monster series of bikes for instance, the Multistradas that have now grown to include a genuine adventure bike and of course a recent deluge of Scramblers featuring styling tweaks to suit every taste.

If you wanted a sport bike from the Italian manufacturer then the options were fairly limited; the full fat 1299 Panigale or the ‘middleweight’ 959 version of the same. Both are meant for the track with riding positions that only make sense when you’re knee-down or tucked in the bubble. 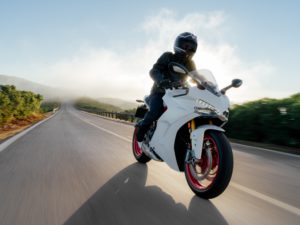 Both are beautiful, absolutely stuffed with the latest technology and quite ridiculously powerful. The 1299 makes 153Kw and is terrifying in a good way around a track, and terrifying in a genuinely scary way if you’re using all that performance on public roads. Even the supposed entry-level 959 makes 117Kw, which is over 30Kw more than the original 916 made, and that was fast.

Thankfully for those of us without the reactions or bravery of a superhero, Ducati has decided to revisit its past in an attempt to fill what seems like an obvious gap in its range. The Supersport is back after an absence of 10 years, and is designed to generate those sport bike thrills with more than a passing nod to everyday practicality.

No need to assume an undignified racing crouch, no chiropractor on speed-dial, room for a pillion and luggage; this is most definitely a sport-tourer. 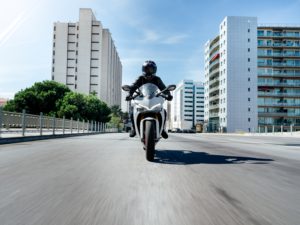 Take a quick glance at the spec’ sheet as I did, and you, too, will probably be left distinctly underwhelmed. 84Kw does not sound very exciting, especially in the large capacity sport-touring class where 110Kw isn’t even a headline number.

Fortunately all you need to dispel those spec’ sheet blues is the briefest of rides, because the Supersport feels like it has plenty more oomph than that. There’s useful, gutsy drive from way down in the rev range, aided no doubt by the 937cc V-twin’s lovely spread of torque. 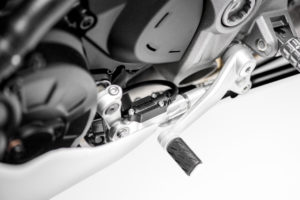 The bike I tested was the Supersport S, and it came equipped with an Akrapovic exhaust that pumps out the sort of V-twin roar that you associate with Chaz Davies and WSBK racing. Allied with an auto-blipper gearbox this is one sport-tourer that is quite happy thrashing around a track.

The Supersport uses a slightly modified frame from the Monster 821, and though that is very much a street bike the ingredients are a perfect match for the circuit. But that capability is not this bike’s main focus, it needs to provide the same sort of entertainment out on the open road. 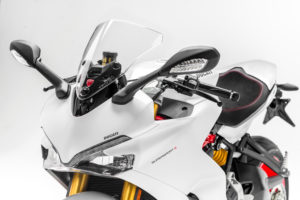 Mission accomplished on this front, too. The riding position is much more agreeable than the Panigale’s with more room overall, a higher handlebar, lower footpegs (though still quite high for the class – need the ground clearance for the sweet handling) and a decent seat. You can spend hours here without feeling the need to stop and have a stretch every five minutes.

Wind protection isn’t great in either of the screen’s two settings (high or low), but there is a taller screen option if you feel the need. Your passenger might need more frequent stops though, unless you take the optional larger pillion seat and grab rails which should help with comfort levels. 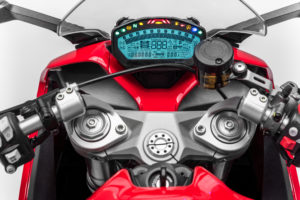 Electronically the Supersport has just the right amount of electronics, accessed by a LCD dash that is easy to operate. Sport, Touring and Rain modes are available, with each offering a variation of throttle response, traction control and ABS (which, handily, can be turned off at the rear for track-day madness).

The Supersport is also a great looking bike, and from the front there’s a definite Panigale family resemblance. Build quality is superb and the quality of components like suspension and brakes is beyond reproach.

The Supersport then is very much still a sport bike, except for the road rather than the track. It can do the touring thing, but somehow I got the feeling it would much rather turn the scenery into a blur than take the time to soak it all in. 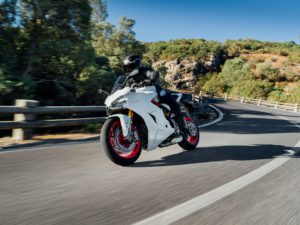 This bike is so much more than the spec sheet suggests it will be, and I’m not the only one to notice. This year’s Pirelli Bike of the Year competition saw the Supersport easily take a somewhat surprising 3rd place overall, and that’s because all 15 judges were blown away by the talents of a bike from which nobody expected too much.

If R188 000 for the S version is too rich for your tastes don’t worry, take the standard version for R20 000 less and you’ll enjoy the same experience. The major difference will be the absence of the quite wonderful auto-blipper gearbox, but that can easily be fitted as an extra and is worth every single Cent if you’ve got the funds.

Below is a video Harry and Donovan did on The Bike Show where they lined the Supersport up with the Kawasaki Z1000SX: