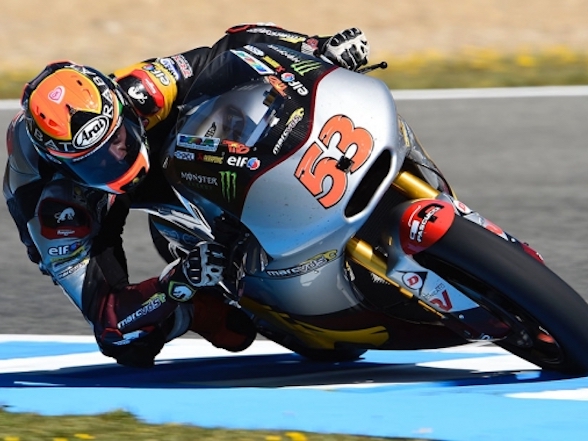 Looking at this headline, you’d be forgiven for thinking that this bike was sitting in a museum or a private garage in Johannesburg, in which case the words “typical” and “this place is going to the dogs” will be uttered between a series of tuts, but in essence it will not be overly surprising.

Then you’ll be shocked to learn that this theft took place in Belgium.

You know it – headquarters of the European Union and NATO, all about people’s rights and caring for the environment. The place least likely to wage war with anybody.

And yet, at 2am this morning in the town of Gosselies, 55 km south of the capital, Brussels, burglars broke into the Marc VDS team workshop and stole the bike that Tito Rabat won the 2014 Moto2 world championship on, that was sitting on display in the workshop’s reception area.

What these burglars plan to do with it is beyond us. It is a Kalex Moto2 race bike painted in the team’s 2014 livery with Rabat’s signature number 53. Kalex Moto2 machines are thoroughbred race bikes, with each unit hand built from the ground up. They are both expensive and extremely rare –  while the price isn’t openly advertised, and is probably negotiated with each buyer, they are estimated to cost around 100,000 Euros (R1.5 million) each, and this obviously will not include any special add-on parts the team has fitted.

The truth is that the burglars cannot exactly put it up on Gumtree for sale, or quietly sell it some enthusiast, because the moment it turns up at a track day, everyone is going to raise an eyebrow. This then begs the question of whether the miscreants actually knew what they were stealing. Maybe they saw it through the shop window and thought “we’ll have that!” and now are tad stuck. Or, better, they will try and sell it nonchalantly and realise their mistake only when the police arrive.

The other choice they have, and this is horrific, is to strip it down and sell the parts separately. Even then, those forks are rare and move only in very small circles, that chassis has no numbers and cannot be used for anything else and even the motor – that is built specially by Honda and based on that of a CBR600 – has no engine number and cannot realistically be used in any European nanny state.

Much like in 2016 – when four Tyco British Superbike race machines were stolen and after the thieves realised that these machines could not actually be sold, simply dumped them in a field – this bike should turn up somewhere, either abandoned or, and this should be more fun, when police track down the ignorant burglars.