There were 15 finalists in the 2017 SA Pirelli Bike of the Year and only one winner. You might agree with the judges and you might not, so The Bike Show decided to take a look at each one and see why what was where. Click Next or Previous on the icons at the bottom of the page to see more, or click here to go to the beginning. In didn’t make the top six, but it made the finals – the Yamaha R6: 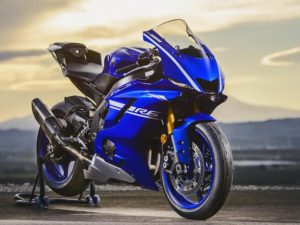 The 600cc sport bike class has been moribund for a long time, so kudos to Yamaha for persevering with it and, not only that, but making a brilliant little bike to boot.

In a world where size matters, even if close to 200bhp is way out of most rider’s leagues, anything less than 1000cc is always going to suffer in terms of public perception. But those in the know recognise that a bike such as the R6 can actually be more fun; the chassis has less weight and smaller dimensions to cope with which can lead to sharper handling and better real-world performance.

The R6 looks like its bigger brother and borrows a lot of technology from the R1; the same front forks, multi-level traction control, 4-piston radially-mounted monobloc callipers, rider modes, aluminium fuel tank and up-and-down quick-shifter. It’s a fantastic package and really all the sports bike anyone will ever need.

If there is a downside, then it is common to all sports bikes; an uncompromising riding position but, as it comes with the territory, it’s not something that will sneak up and bite the owner on the bum after a few months’ ownership.

Small can very definitely be beautiful.