There were 15 finalists in the 2017 SA Pirelli Bike of the Year and only one winner. You might agree with the judges and you might not, so The Bike Show decided to take a look at each one and see why what was where. Click Next or Previous at the bottom of the page to see finalists, or click here to go to the beginning. In second place is the Honda CBR1000RR Fireblade SP: 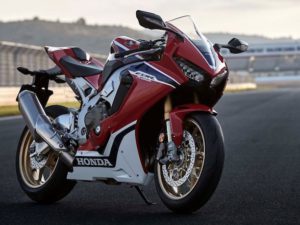 The Blade is back, and not a moment too soon. Recent years have not been kind to the Honda legend, as it became the fading star of a seemingly dormant class. Kawasaki and Yamaha reinvigorated the superbike class last year with their new flagship models and now, finally, Honda has rejoined the fray.

The Honda Fireblade is available in two guises, the SP version in this event is the more expensive of the two and comes with a tasty list of extras that more than justify the extra expense. Think of these as the icing on an already delicious cake.

The SP is so mouth-watering because the basics, as found on the ‘cooking’ version, provide such a perfect starting point. Frame and engine are identical between the two models, and they result in a blisteringly fast but entirely friendly sport bike.

The engine is a natural evolution of all those that have come before it, so it’s lighter, higher revving and a bit better everywhere. Does it bring new levels of performance and technology to the class? No, but then, strictly speaking, it doesn’t need to. Anything up around 200hp and less than that in terms of kilos is always going to be too fast for normal humans on normal roads, better that it inspires confidence and helps you feel in ‘total control’.

Which, as I’m sure you remember, is what Honda’s engineers have always banged on about with the Fireblade. Much talk of mass centralisation and total control accompanied this new version, too; but I’ll have to stop my moaning now because whatever they call it, it works.

Add into this mix a set of electronically adjusted and damped Ohlins forks and a full color display that, for the first time in my biking life, has made the prospect of fiddling with your bike’s set-up something less than hopeful voodoo with a set of inappropriate tools. On the electronics front this is a quiet revolution, so expect it to be copied.

Honda created a genuine legend back in 1992 when that first, diminutive Fireblade made its debut. 25 years later Honda has marked the occasion appropriately with a bike that is more than fit enough to keep the legend alive.