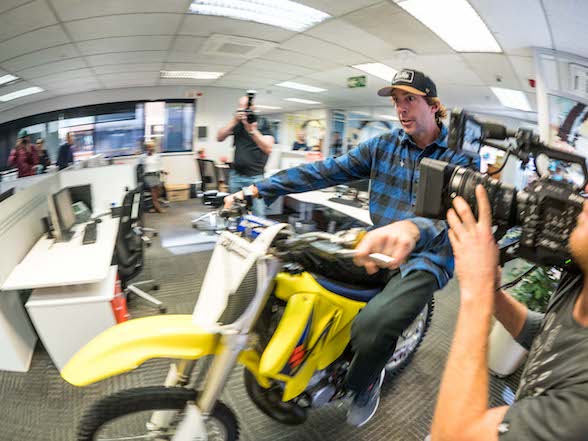 This guy is crazy. Maniacal, deranged, barmy, kooky, nuts, cuckoo, psycho, dippy and mental. But he does it with the world’s most sincere and humble smile, and you can’t help but laugh and enjoy.

People listening to The Breakfast Club on 94.7 Highveld Stereo this morning will have some idea of what we are talking about. For the interview, he arrived in the sound booth to a flurry of two-stroke motocross noise and fumes, much to the delight of the show hosts who have probably never had an intro like this. He waltzed through the interview with his usual high spirits, grace and humility.

What listeners might not know is that his noisy sound booth arrival was the finale of a full 94.7 office tour – more so, a tour of the entire Primedia Sandton building.

He started in the parking lot at the bottom of the multi-storey building, and rode his Suzuki RM250 through the entrance, up the elevator and through the offices, narrowly missing the desks and staff. The intent, we suspect, was for him to ride slowly and cautiously through the building, but as is the way with motorcyclists – and, more so, action sports stars – mischief tends to creep in, and was soon pulling wheelies and stoppies, and leaving memorable tyre marks on the office carpets.

One thing he did ask to do in the studio was a burn out, but sadly they said he should rather not. This had something to do with two-stroke smoke, tyre smoke, noise and the wellbeing of their office. However, once the tour was done and he was awaiting his cue to enter the sound booth, some of the surrounding media made the suggestion. And then the dare. If there is one thing you should never do to an extreme sports star is dare them to do something. See the videos below for the result.

Nitro Circus Live is currently gracing our South African shores. It is a massive action sports show with some of the biggest jumps you have ever seen being jumped by some of the most talented sports stars in the world on some of the strangest items. The last tour they did in South Africa, back in 2014, blew the minds of the thousands of people that attended. Pastrana assures us that this time round will be even better.

The tour dates are:

See the Big Concerts website for more details and tickets.

Here are the videos starting with the tour of the office:

And then, while awaiting the cue to go into the studio, he was tempted to do a burn out. Take note of what a down to earth, easygoing fellow he is:

Here is the gallery of the day – click to enlarge: