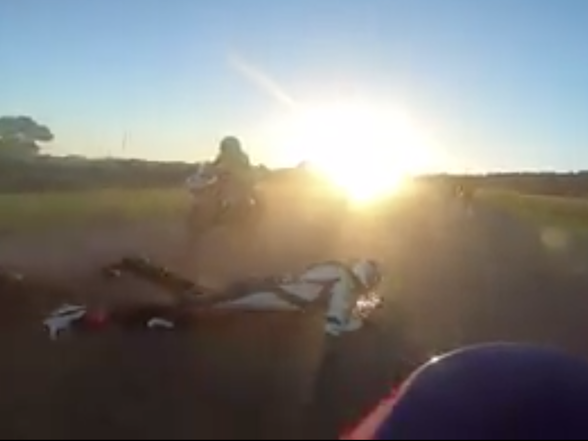 The new 300 class seems to be the new black as they are popping up in droves all over the world. This all started thanks to a new range of affordable motorcycles that are roughly 300cc, including the KTM RC390, the Yamaha R3, Kawasaki Ninja 400 and, in some series, the Honda CBR500R. Obviously the bikes with larger capacities or more cylinders are giving restrictions to help level the playing field. The fantastic part about racing bikes like this is the accessibility in that they are sold in nearly every bike shop, and that they cost roughly a quarter the price of a base model Moto3 racer.

In South Africa, the national SuperGP Series has their own version congruently dubbed the Super300 class. The third round took place this weekend at the Border Motorsport Circuit in East London, a circuit that is infamous for its long straight, ridiculously fast sweeps followed by hard braking for hairpin bends.

This video is from the bike of racer Dino Iozzo from the start, and shows them heading down the main straight, and into the flat out Potters and Rifle corners. From there, they head into the downhill braking zone before the Cocobana right-hand hairpin.

Iozzo attempted to go down the left of Tyreece Roberts, clipping Roberts’ unsuspecting handlebar at 180km/h causing him to go down. The skidding bike then took out lady racer Zanté Otto who was leading the race.

While youngsters bounce well, they sometimes crack a little. Roberts is suspected of having broken fingers while Otto looks like she has a broken bone in her hand.

See below for the video courtesy of ILEB: