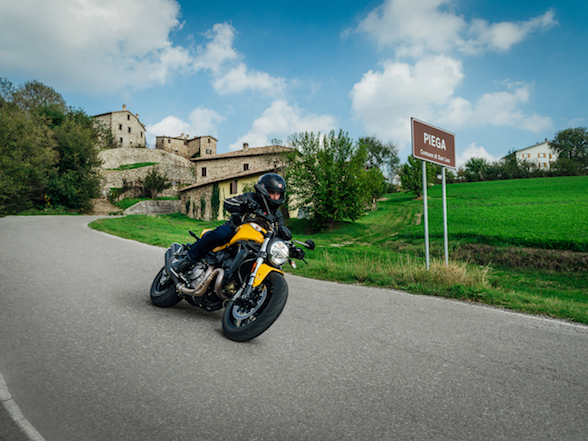 Ducati have been slowly updating their Monster range, which sounds like progress and certainly is, however the world is now going backwards. By choice.

This year marks the 25th anniversary of the first Monster – the iconic M900. This was a bike that changed the fortunes of Ducati and spearheaded the naked bike class that is now so prominent. At the same time, the 916 was bringing glamour to the world of superbikes, and a year later Carl Fogarty would dominate the World Superbike Championship on one, his first of four championships with Ducati.

While the 916 showcased Ducati’s technical knowhow and design genius, the  M900 was the bike putting Ducati’s supper on the table. It was well-priced, classy, simple, easy to ride and it carried the name Ducati on the tank, effectively bringing that name to the common people.

And now Ducati celebrates 25 years of their naked range, and so are bringing their new 821 more in-line with the stylings of the original. This is all terribly convenient for Ducati because modern trends dictate that sleek, glamorous and futuristic are out, while old-school and retro are in. This is a massive bummer to the legions of Ducati designers that have been carefully planning the future design path for the the range, and we can imagine the crestfallen look on their poor faces when the marketing department barged into their offices and said “good news, everyone – our research says that the market wants old, so make our bikes look like they did in the old days!”

Slowly but surely, the design team have been giving it a less simple, more angular look, bringing more space-age to a machine that is all simpleton. Now, much of this has been undone. 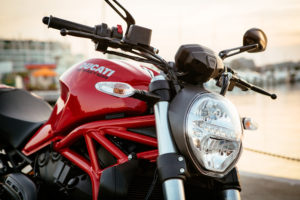 Most noticeably, the headlight, that has slowly been morphing into a more oval shape that moulds into the handlebars and forks, is now more round and more in-line with the original round headlight from the M900. The tank is less bulbous and more streamlined, while the tail section is sharper and more angular.

The designers did manage to sneak one piece of the future under the retro radar – a TFT colour dash that, apart from looking fabulous, also gives the 821 a gear indicator and a fuel gauge. On the options list is a both-ways quickshifter.

Ragging apart, the Monsteristi – it says something about the popularity of Monsters that they have a special term for their fans – will enjoy the more original look, something that makes the 821 feel more legitimate. More so, the 821 still keeps its fun-loving performance and usability, the plucky 109hp from the motor and the safety electronics package that features Power Modes, Riding Modes, ABS and traction control. The new 821 will be available in three colours – red, black and the classic yellow.

Ducati South Africa say that they expect it to arrive between March and April next year.

Below is the Ducati promotional video for the 821 and the full gallery: