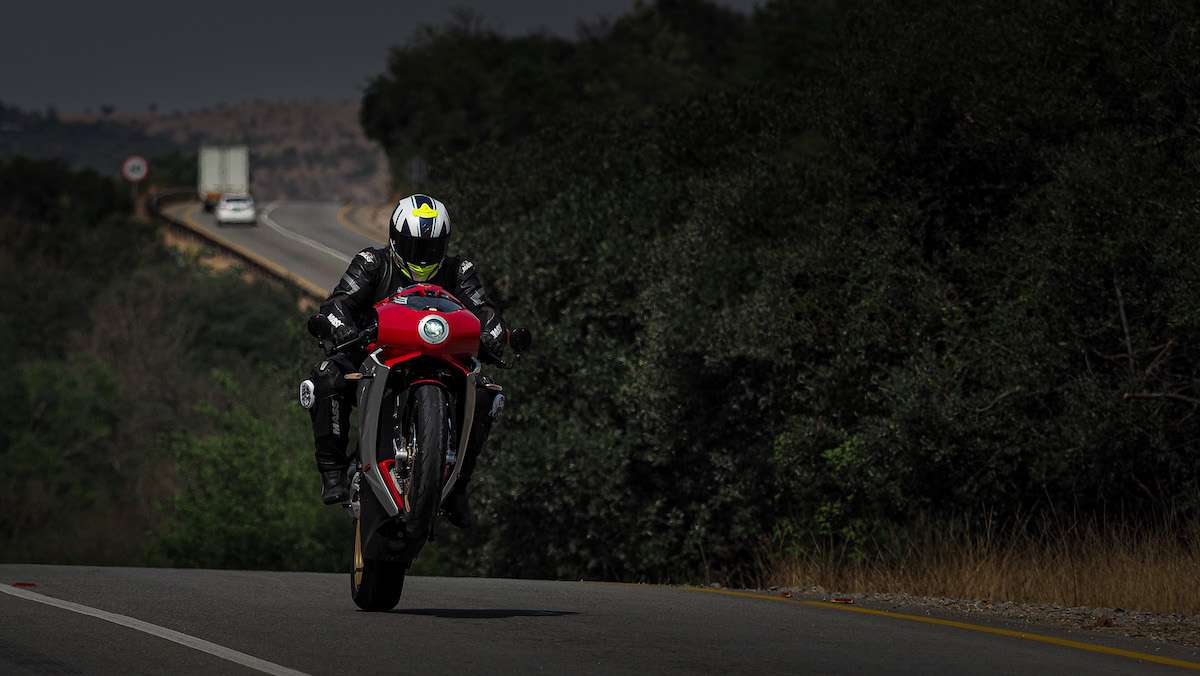 Feel like a king, feel like an emperor, rule all you survey and go for a smashing, good ride: ladies and gentlemen, the MV Agusta Superveloce.

Pics: Meghan McCabe
Here is a quick 101 lesson on how to write a motorcycle road test – it starts with scanning the internet for information on the bike because half the bloody job of journalism is research. You look at the official site, the official press release and you read marketing garbage spewed out by overpaid copyrighters. From these laborious scriptures, you get an idea of where the designers were going with it.

You then move on to overseas motorcycle sites and YouTube channels. Once you’ve stopped cursing your international peers for getting to ride bikes before us at the bottom of Africa, you see what they have to say in their reviews.

This isn’t plagiarism – you’re not stealing their work – you are merely looking for inspiration, ideas and perhaps information that was neglected by the copyrighting goons.

To our endless dismay, there was no such luck. Instead of rivetting their readers with tales of majesty, these journalists spoke briefly about the looks before launching into a detailed and strictly objective analysis of every measurable aspect of the machine.

They pointed out that, beneath the exterior, it’s more or less an F3 800 mid-range superbike. They spoke of the 148hp figure and how it is not too much power but enough to have fun with. They spoke of how the chassis feels good, about how it is relatively comfortable for a superbike and how it doesn’t have a six-axis IMU controlling the ABS and traction control. However, it still has those features anyway, together with a quick-shifter that works both ways.

They spoke about the triple motor and how it has the characteristics of both a twin and a four-cylinder before briefly commenting on the sound it makes.

They mentioned the Marzocchi Forks and the Sachs suspension, how they are not entirely on par with Öhlins and how they have no electronic adjustment. They pointed out that the ride is a tad stiff and how it could be used for a track too.

They talked about the R400,000 price tag and how it’s a good deal more than comparable models, like the Ducati Panigale V2, the Suzuki GSXR750 and, for some mind-boggling reason, the naked Triumph Street Triple 765. They pointed out, almost in a “by the way” manner, that the Superveloce perhaps has some qualities about it that help justify that price.

We read this in open-mouthed bewilderment, wondering how the hell these guys got these glitzy jobs at mega publishing firms, earning a considerable chunk more coin for their services than we do.

There are German bean-counters that do their work with more colour and more passion.

It is possibly the first time that the thesaurus–abusing copyrighters have done a better job than our motorcycle journalist brethren.

It might be a hurdle too high because words can only go so far, but let’s attempt to convey properly what it is like to have a Superveloce adorning your garage, gracing your ride, fulfilling your life.

For this model, MV took the concept of a retro racer that bases its design on the romances of previous glory, then looked at the futuristic concepts that fill the mind with wonder, and merged them together in some sort of paradigm whisking concoction. There is Giacomo Agostini combined with Tron. There is the celebration of happy days gone by, mixed with the excitement at things that might be.

The results are breathtaking to behold. It is one of those machines that fill your life with joy only because you have one. You will sleep soundly at night, giggling happily to yourself, warm in the knowledge that it sits soundly in your garage a few metres away, awaiting morning to once more light up your life.

Or light up your eardrums, either in mild torture or heavenly paradise. A strange paradox indeed, but the sound emanating through its triple silencers changes between low rpm and redline orbit. At idle and low-speed cruising – forgive us, MV – but it sounds a touch like a rough bread van.

Open the throttle, let the revs launch and the bread van sheds its coarse exterior, shines its bright lights and sings a triple-cylindered Siren song that will tempt sailors to their untimely doom.

The sound makes it feel like the bike is going faster than it actually is, plus it inspires the rider to go yet faster. It’s a glorious combination of flattery and shameless motivation.

Handling is much the same as the F3 800, with the 173kg dry weight combining with the half-steel, half-aluminium frame to make it tip effortlessly into turns. Meanwhile the counter-rotating crank and the trellis main frame work to keep the whole circus stable and planted on the tar. The revised throttle mapping offers a smoother throttle action and a touch better pick-up of revs.

Another strange paradox – the Superveloce and the Dragster 800 have essentially the same engines. Yet, while the Dragster rears and bucks under acceleration in a flurry of drama-filled action, the Superveloce remains calm and stable, concentrating only on going forward as quickly as possible.

The TFT dash may not be the most colourful on the market, but it is tasteful. It can connect to the MV Agusta app on your phone where the various electronic settings of the motorcycle can be set up. Navigation routes can be plotted that will be shown via the dash, a feature still uncommon not just in superbikes but all of biking.

And so we’ve straying shamefully into the arena of sensible motorcycle road testing when there is nothing sensible about this motorcycle. Having sense requires brains and logic, something we do every day at work, at home and everywhere in-between. We ride motorcycles to escape the torture of sensibility and drift into a metaphysical world of wonderment and joy.

It is in this world where MV Agusta thrives, with the Superveloce leading their starting line-up. It makes its riders feel special, feel like a king and queens as they saunter up to it in the breakfast run parking lot while everyone else can do nothing more than look on.

And look on they do – the Superveloce turns heads; not just those in the motorcycling realm that knowledgeably turn their heads at its appearance, but everyone. Park it in a shopping centre, and ordinary people will wander over to quench their curiosity. People in their cars will take their eyes off the road, and wide-eyed kids will tug their parents’ trousers and point.

You do feel like a king for a day or a king for every day you ride it. The fact that it is also fun to ride is a mere bonus.

Kawasaki Ninja 650 – more than a name