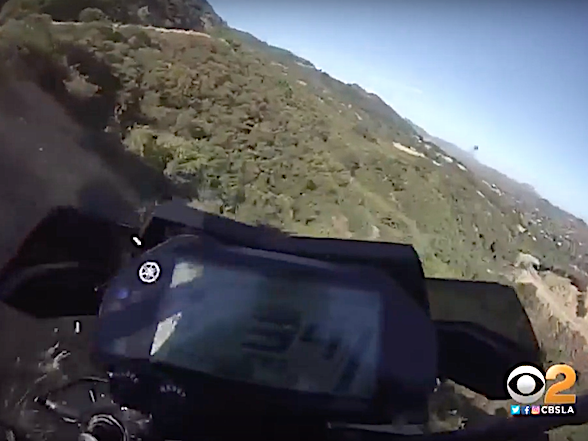 Any motorcyclist who has ever had the privilege of riding along a mountain pass has looked down at the precipitous cliff that aligns these glorious roads and thought: “Sheesh, I’d hate to end up going off there”. To many it is even their number one fear.

Step in Californian motorcyclist Matthew Murray who was riding through the hills of Malibu on his Yamaha FZ-10 (MT-10 to the rest of the world) when he had that exact displeasure.

He has been riding for six years, and claimed that it felt as though his steering had somehow jammed. From the video, done by American news channel CBS, it appears that this might be the case, as it wasn’t a terribly sharp corner and he wasn’t going particularly fast.

Of course, there is also the mystery of how the steering on a bike like the FZ-10, that is quite new and built by a manufacturer that is regarded as one of the the most reliable and reputable, would suddenly do that without either tampering or outside factors. It is unlikely that the actual steering itself, i.e. steering neck, bearings, etc, would fail so catastrophically. Perhaps the steering damper came loose? Maybe they fiddled with the routing of throttle or clutch cables that might have hooked on something and jammed the steering?

The other possible scenario is that he had a blowout on the front tyre. Sometimes this causes the bike to weave wildly, while other times it just causing a loss of steering. Obviously you would see the flat tyre after the crash, but after an excursion like that it is unlikely that the front wheel did not experience some sort of trauma and be damaged.