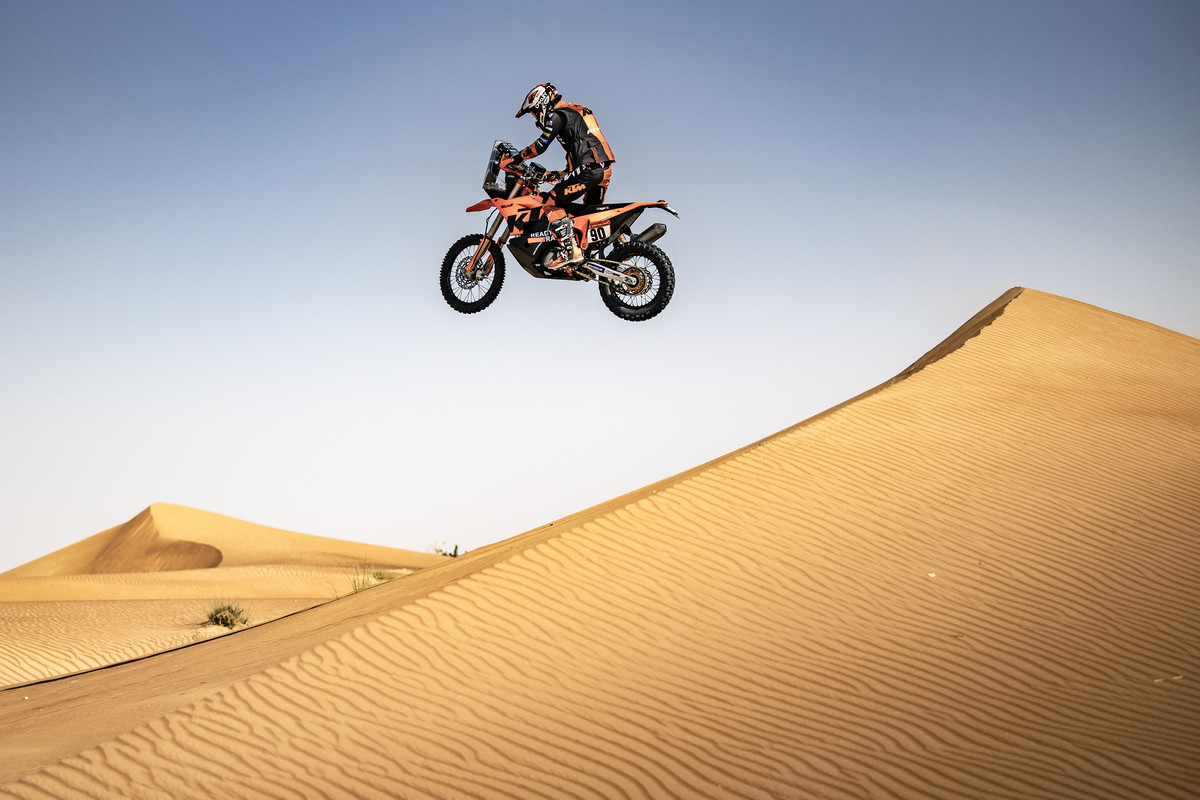 Dont you hate it when people are good at stuff?

Danilo Petrucci is a 31-year-old Italian who has raced in MotoGP for ten years, accumulating ten podiums and two wins.

For 2022, he shall be attempting a life dream – the Dakar Rally.

It seems logical that someone good at one motorcycle riding area will be decent enough at the others. Then we see photos of Petrucci jumping sand dunes aboard his KTM 450 Rally, painted in the same colour scheme as his Tech3 KTM MotoGP bike, and we can’t help but feel that some people get all the talent.

Petrucci has been riding enduro and motocross as part of his MotoGP training for years and is said to be somewhat handy at both, but rally is a new discipline, especially roadbook navigation.

To help him in his learning process, Petrucci has been receiving assistance from Jordi Viladoms, KTM’s Rally Sport Manager and a former Dakar competitor. He will also have help from 2018 Dakar winner Matthias Walkner, two-time Dakar winner Toby Price and reigning champion Kevin Benavides.

After the last race of the 2021 MotoGP season at Valencia this weekend, he will be concentrating solely on Dakar training, preparing for the 14-day, 8,000km event that begins in Saudi Arabia on January 1st.

Apparently, after he departs from circuit racing at the end of this year, the Italian will be eyeing a future career in rallying.

“For me, it is really a dream come true to race the Dakar,” remarked Petrucci. “It’s an event I’ve always wanted to do since I was a child when I was watching videotapes of the Dakar Rally from the 80s and 90s. Now, thanks to KTM, this dream is coming true. First, I would like to thank KTM for this great opportunity; I think I will be the only rider that in just over one month has competed in MotoGP and then the Dakar Rally – so it is with great pride that I go there. My main target is just to finish the race and enjoy it. The first approach was to have some roadbook training with Jordi, he competed in the race many times and finished on the podium, so he has been great in helping me learn this special art. I had my first taste of riding the KTM 450 RALLY recently at an initial test in the Dubai dunes, where I was with KTM’s Dakar champions and I was able to learn so much from them – it was great to see them riding, and they were super nice and helpful to me. I hope the training for the next month will be enough; for sure it will be a tough race, but I am excited.”