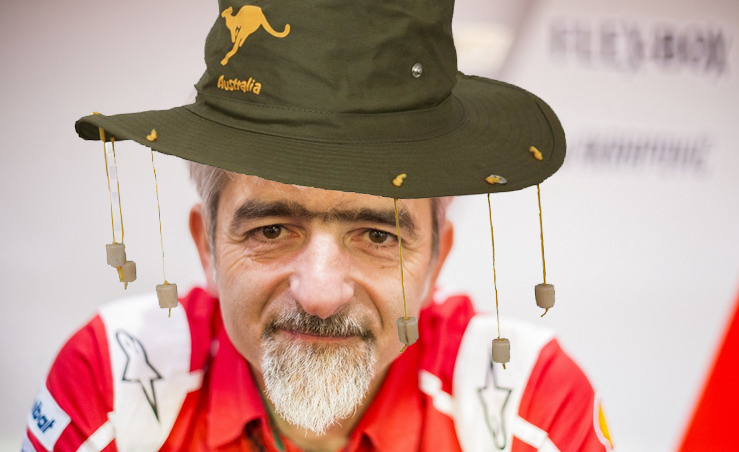 Story: Shaun Wray
There has been no premier class racing for close on seven months, and development is on hold, so the only thing we can get excited about is gossip. On that front things haven’t been looking great – Iannone took drugs and had sex, so nothing new there. Crutchlow crashed a bicycle again, so nothing new again. Please give me something other than South African politics and conspiracy theories to read. I need something juicy and exciting.

I for one was always excited when silly season fell in the summer break, roughly two-thirds of the way through the championship; however, in 2020 it is coming at the right time.

What are the mechanisms for a good silly season? You need riders, teams and us, the armchair experts.

The rider’s needs are relatively simple:
1) a job riding a motorcycle.
2) hopefully said motorcycle and team have the potential to bring wins. Failing that, podiums. Failing that, regular Q2 appearances.
3) longevity, being able to build a relationship with a team, looks suitable for the rider and the team.

A team’s needs are a bit different – teams and manufactures go racing to do well or to just be less shit year on year. To do this, they need to raise millions of dollars to get two bikes to the start line, and this money comes from sponsors, big corporate sponsors. They care a lot about their image and pay someone a decent amount of money to have ‘PR and marketing director’ on their email signature. So, when the silly season comes along, they need to stick to the budget, find a rider that will get results but also look shiny for your brand, and only say good things about you. He will need to be reliable and someone you can build a relationship with.

And us lot, the people. We all think we are better crew chiefs and riders anyway, but at the end of the day we just want our hero (read Brad) to win, and Sundays to be more exciting than ever.

Right now all the teams but one have a problem, a big Marc Marquez problem. Honda is happy that he is winning year in and year out, and they have other good riders like Cal and Taka who can occasionally steal points from Ducati and Yamaha but won’t be a threat to their golden child. They even went as far as allowing his little brother Alex to sit at the adults’ table – he still needs to clean Marc’s boots, but now he gets to ride the other bike and cause traffic jams further down the field.

The guys that do similar, less exciting racing with more money but on four wheels have a similar problem – his name is Lewis, and he likes winning in a little silver car that works very well. The Netflix series Formula One: Drive to Survive, which is far better than the actual racing, took us behind the scenes of the 2018 and 2019 season and highlighted the importance of the silly season. Ferrari gets close but finds a way of messing it up every year, so make perfect bridesmaids.

The 2019 season was different though teams started getting rid of their older, more established, more expensive drivers and went hunting for the young dumb and full of cum variety. They cost less, come with a social media presence and are really hungry to win. And thus, 2019 had the youngest average age of all time, so racing and politics became more exciting. Earlier this month, Ferrari announced Carlos Sainz to join Le clerk who seems like the right move – both are young and hungry enough, and in a car that can fight with Lewis. We have seen Red Bull do this in 2019 with Max and Pierre, then Max and Alex (Chris Horner can move drivers between Red Bull and Scuderia AlphaTauri as he likes).

While KTM is improving, the only real competitors to Repsol HRC are the Mission Winnow Ducati team, Monster Yamaha and Suzuki Ecstar. Yamaha played their card before the season was supposed to begin by announcing that Fabio would join Maverick in the factory team in 2021. At first, Rossi fans were far from stoked, but later they were told he has been linked to the Petronas SRT Yamaha team for 2021, although he has not yet put pen to paper. Being a Ducati fan, I have no reason not to like the team Dovi and Petrucci. They are both very likeable and get results, but Ducati hasn’t won a world championship for a very long time now, and I can only keep this Casey Stoner poster for so long. We need something a little more exciting, we need a young gun or two who can provide results and bring some excitement to the team.

I hoped, I prayed, and I did didgeridoo lessons online during the lockdown. The Wandjina (popular Australian Aboriginal god) must have heard my plea and beautiful music, as I woke up to the news that Ducati has signed Jack Millar for the 2021 season. We don’t know who will accompany him – I am hoping Dovi will hang around for another year to show him the ropes, then get replaced for 2022. Other sources have suggested a return for Iannone, but I think that is a reach as he is as good for PR as brake-grabber Romano Fenati. If Ducati were to go back in their HR archives, I would prefer if they signed Rossi (again), but that’s a wild dream.

Where would you go if you were Petrucci? Maybe a better question is who wants a big fast Italian gorilla? He has been linked to a WSBK factory ride with Scott Redding which to me would be a sensible move. Petrucci came from Superstock 1000 and, being slightly bigger, might be more suited for a ‘production’ bike. Aprilia also have their hand up, as a rider would you rather be one of the best in an inferior class or fight for points in the top class? We can see which one Rea chooses often.
Suzuki is playing it safe and keeping their pairing of the freshly-pruned Alex Rins and the hungry-for-more Joan Mir for another year.

As only seven seats for the 2021 season have been confirmed, many rides are preparing for a great game of musical chairs. Our Brad Binder is still the apple of KTM’s eye, and yes their bike is improving but is it a real podium contender or is it still just good fighting with the best of the rest? If a better opportunity came along for Brad, should he take it?

What would you do with millions of Dollars and a plethora of riders at your disposal?