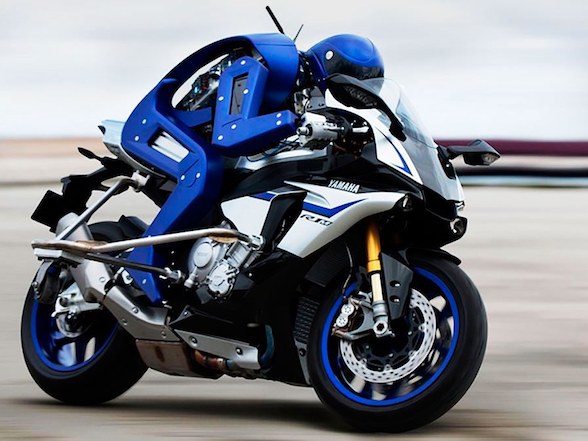 Robo-Rossi: The 2025 MotoGP champion is… not human

Story: Mat Durrans
I may be the least technologically literate of The Bike Show team – I don’t use facebook, twitter, insta-wotsit or any of the many digital platforms on offer. My social media network generally centres around the pub, though admittedly the only sharing going on is when the bill comes. Pay the whole thing and you’re guaranteed plenty of likes.

My reluctance to let these new communication methods intrude on my life too much has more to do with me being a grumpy, lazy old cynic than a true Luddite. I actually love new technology and all that it brings to contemporary life, a passion that began as a kid hooked on the imagined worlds of sci-fi writers like Isaac Asimov, Arthur C. Clarke and Douglas Adams.

My professional interest in bikes means I’m loving the ever evolving story of Yamaha’s Motobot, something we originally featured on the programme last year. In that piece Valentino Rossi was introduced to the humanoid, erm, Motobot that Yamaha is developing as the test rider of the near future.

During that first meeting Motobot admitted it was far from matching the pace of the MotoGP legend himself, but warned that it was learning quickly and perhaps one day it would be able to compete.

Oh, how we laughed. Never say never, but a robot that can ride a bike like Rossi? We’re likely to see an international rugby match on Mars before that becomes possible.

Brushing aside the wishful thinking of the marketing department for a moment, I have to say Yamaha’s endeavour is one of which I highly approve. Their approach is refreshing – what you can see in the first of the videos is a humanoid robot because it has legs, arms and a head.

The idea is that you will be able to plonk this metal chap down on whatever bike you want, and it will use exactly the same controls as you or me. It’s a brilliant concept, and the sight of Motobot working at the throttle and flicking through the gears – with its ‘feet’ and ‘hands’ – instills a definite sense of awe.

We recently aired the second instalment of the Motobot story, as told by Yamaha’s PR film of the first head-to-head encounter between the two. It wasn’t close, and at the moment is akin to comparing a first time trackday rider in the ‘D’ group with a national racer.

Motobot is undoubtedly getting quicker, but what’s holding it back? Learning the circuits is no problem, particularly if they’ve incorporated some sort of GPS system. The millions of laps it is amassing during testing – 18-hour / 1000-lap days with no lunch or toilet breaks and no overtime pay – will soon teach it about the perfect places to accelerate and brake.

What about feel, I hear you ask. Well, a rider undoubtedly also develops feeling for a bike over time, and the best ones can use those sensations to take a bike to the edge of available grip, and just beyond.

Helping the rider enormously in this respect is the man in the pits who has become the most important cog in the team. The data guy, the dude carrying the laptop is the man who helps a racer marry his feelings with what the bike is actually doing. With sensors measuring every possible parameter the data engineer is able to fine tune the bike’s responses to the rider’s needs.

Since Motobot can essentially plug itself directly into those sensors while riding the bike I can see it developing its own very accurate sense of feel, minus the human element of intuition.

Watching the human and robot in action there’s one glaring difference, an aspect of the riding equation that I had thought would take many years to solve. Rossi is throwing himself around the bike in order to help its weight distribution and find whatever grip is available in whatever type of turn that might be.

Motobot is doing a good impression of Mike Hailwood, remaining completely static on the bike. This is putting our artificial pretender at an enormous disadvantage.

Right now would be a good time to watch the second video; I’ll wait until you’ve seen that because it will save me a lot of words.

Pretty amazing, eh? I had no idea robotics had advanced so far, so quickly, but it doesn’t take much imagination to see that this could well be the Motobot of the future, a robot that will very easily be able to hang off the side of a bike and ride like Rossi.

As Harry said during the TV piece, this could herald the start of ‘riderless’ bikes – though Honda seems to be well on the way to having that covered.

Who knows, maybe the next MotoGP champion after Marquez has retired will not have blood running through its veins, but electricity through its wires.