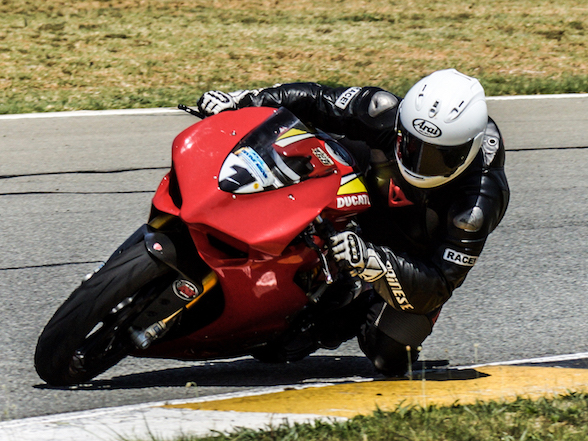 For The Bike Show TV show, we were asked to put the new Mitas superbike tyres through their paces, and more importantly, through more of a pace than last time where we simply put them on a Triumph 675 Street Triple and went around Midvaal Raceway two-up.

No, this time they wanted them on a proper superbike and ridden properly, so we threw them onto a Ducati 1199 Panigale S and took them to Red Star. The itinerary was simple – test them to their limit and beyond. In the world of cars this is simple; drive until you spin out. In the world of superbikes, this becomes more problematic – a spin out on a motorcycle could mean severe injury, or death. But test them we shall!

There was also a small question mark over the name: Mitas. Anyone who has ridden an offroad bike or adventure bike will hold this name in high reverence, but it is rather unknown in the high speed world of superbikes. In offroad, you simply build the tyres so that the knobblies dig into the sand enough and don’t break, but superbike tyres require compounds, carcasses, contact batch, heat dissipation and tyre wall strength. How many of these attributes does this Czech Republic tyre maker specialise in?

At this point a short argument ensued – who was to ride the bike. Personally, I believed that my co-presenters, Mat and Harry, were older and more mature, and had spent enough time on this earth to quantify “a good innings”. They, on the other hand, believed that my youth and exuberance were more pertinent to this test and, even more importantly, they felt that I was more expendable than they were.

So, all I had to do was go out and do some laps? That doesn’t sound hard. So off I went.

The Sport Force+ is the second generation of sport tyres from Mitas, with them now offering better “tyre tread compound to get an even more competitive sport on-road tyre” which explains everything. They also use a host of complicated acronyms relating the process with which these tyres were developed to further justify this statement, with none of them actually clarifying anything.

What they do say is that these are not racing tyres, but are made for “riders of sport, naked and touring motorcycles”. This presumably means that they are made for road use, so I rode them like I would on the road that is wet and covered in oil.

My first lap time was about four minutes, and my second was possibly slightly faster – maybe 3min 50sec, just like a person riding on the wet roads through Sandton would do. Unfortunately, my co-hosts decided that this was not nearly enough, and I needed to ride at speeds more representive of racing rather than pleasant commutes – some people are never happy.

Thus, with one out-lap under my belt, I let go of the brakes before turn one, pitched it in to the medium-paced right hander and hoped for the best…

What happened next was, well, uneventful, which was a surprise. My knee hit the deck, I began rolling on the throttle and a second or two later I was exiting the corner.

Well well, let’s do that again.

Turn two lurked, and, with more confidence under my belt, I pitched it in harder and, well, again it simply went around the corner. We spent some time riding around Red Star, with Ivan – The Bike Show’s intrepid cameraman, director, sound engineer, lighting engineer, make up artist, hair stylist, catering manager and everything else required on a film set – catching it all on camera.

To the disappointment of Mat and Harry, I was alive to live another day which, that weekend, involved two days around Phakisa on said tyres.

A reminder – these are not race tyres, and I wouldn’t give up my Racetechs, Supercorsers or R10s for the Mitases, especially if you are a racer set on breaking lap records or are in the very upper echelons of the A group at your local track day, but I did ride for two further days in the A group of MRA, and was far from the slowest.

Eventually, if you push them hard enough, the tyres do lose grip, but they do so well beyond the range of road riders, C group riders, B group riders and even the slow A group riders. More importantly, they offer feel, which is an important word to a track rider. Some tyres offer no feel, and the next thing you know you are on the floor and don’t know why. Probably more annoying is the other tyres that offer too much feel, as every pump and imperfection in the tar comes flying through the bars, confusing the daylight out of the rider. The Sport Force+ does neither of these, giving you enough warning without overloading the senses.

There was only one moment during the weekend, an especially violent, out-of-the-seat highside that took place in a left hander on the second lap out, although this can probably be put down to cold tyres, as we did not use tyre warmers.

Many an avid superbike rider might question why they would not simply ditch the Czechs for the better known sports rubber from the Japanese, the Italians and the French. The answer is simple: at the track school at Phakisa there were all of the well-known track tyres on sale all for around R4,000 a set. The RRP of the Sport Force+ set is R3,100.

More so, most of the well known race rubber will be finished after just a day around Phakisa. This set of Sport Force+ did a day around Red Star and two days around Phakisa, yet still had tread in abundance and felt as good as new.