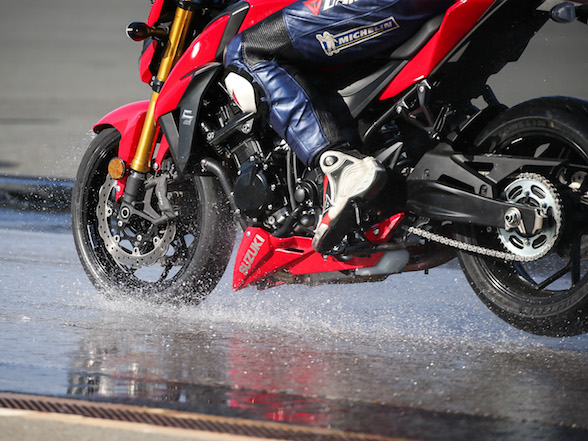 Video: Michelin shows how good their Road5 is in the wet

Michelin, this week, hosted the launch of their new Road5 sport-street tyre in Seville, Spain, and as is the way with Michelin road tyres, they put a big emphasis on wet performance. With the Road5 they have gone not only for wet performance, but consistent performance even after the tyre is well worn.

The problem with a worn tyre is that the tread is shallower and therefore has less capacity to hold water meaning less shedding of water. Michelin have overcome this through a clever new tread design that increases the water holding capacity as the tyre wears. They do this by using 3D printing during the manufacturing process instead of the traditional old mechanical methods. With this, they can design more intricate and complex tread patterns, plus can change the shape of the tread within the layers of the tyre.

Below is a video of Michelin’s wet braking demonstration during the launch of the Road5, where a Michelin test rider approaches the soaked strip at 120 km/h, jams on the brakes hard and attempts to stop as quickly as possible without any inconvenient front end locks and the subsequent crash.

There is far more to the Road5s than just the ability to break in the wet while worn, and the full road test will be posted on this site tomorrow. For now, herewith the video of the test: