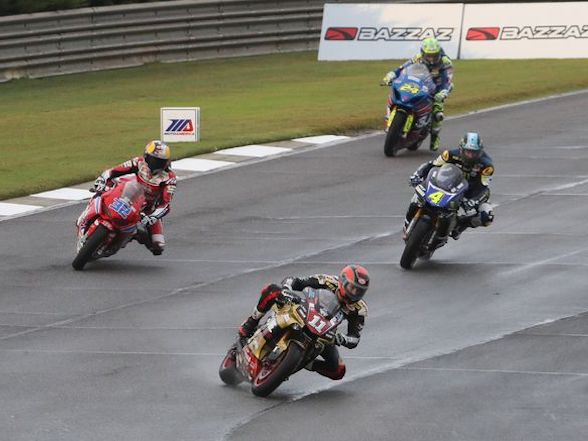 American history by winning a

Superbike race on a Superstock bike

In the MotoAmerica Series, the national circuit racing series for America, they run both the Superbikes (heavily modified 1000cc motorcycles) and the Superstocks (also 1000cc but with far less modifications) in the same race. Obviously the pieces of paper revealing the results show two different classes with two different winners, but the people sitting track side see one race with one guy finishing first but two people celebrating on the slow down lap.

After Sunday’s race the crowd would’ve seen, for the first time in MotoAmerica’s history, just one celebration and it was that of the newly crown Superstock champion, Mathew Scholtz.

The race started dry but the heavens opened shortly afterwards. The race started again with riders equipped with wet tyres, but was again abandoned when puddles started forming and many riders, including Scholtz, went down. They tried again when the track was still wet but less submerged, this time successfully. Scholtz was soon out front on his Superstock, holding off a gaggle of pursuing Superbike riders. Eventually he crossed the line in first with former Moto2 champion Toni Elias in second and four times AMA Superbike winner Josh Hates in third.

This is the first time that a South African has won an American Superbike race, but more so the first time in America that a Superstock bike has beaten all the Superbikes.

“On the final lap, I looked back and saw that Jake (Gagne) was maybe one second back and I was just trying to hold tight lines,” said Scholtz. “I had no idea that Jake had actually crashed and thought that he was right on me the entire time. I was focusing on getting a good drive that last lap and nearly tossed it away twice. I couldn’t be happier taking the overall win today since this means so much to the Westby Yamaha guys and I think they’re over the moon with what we accomplished.”