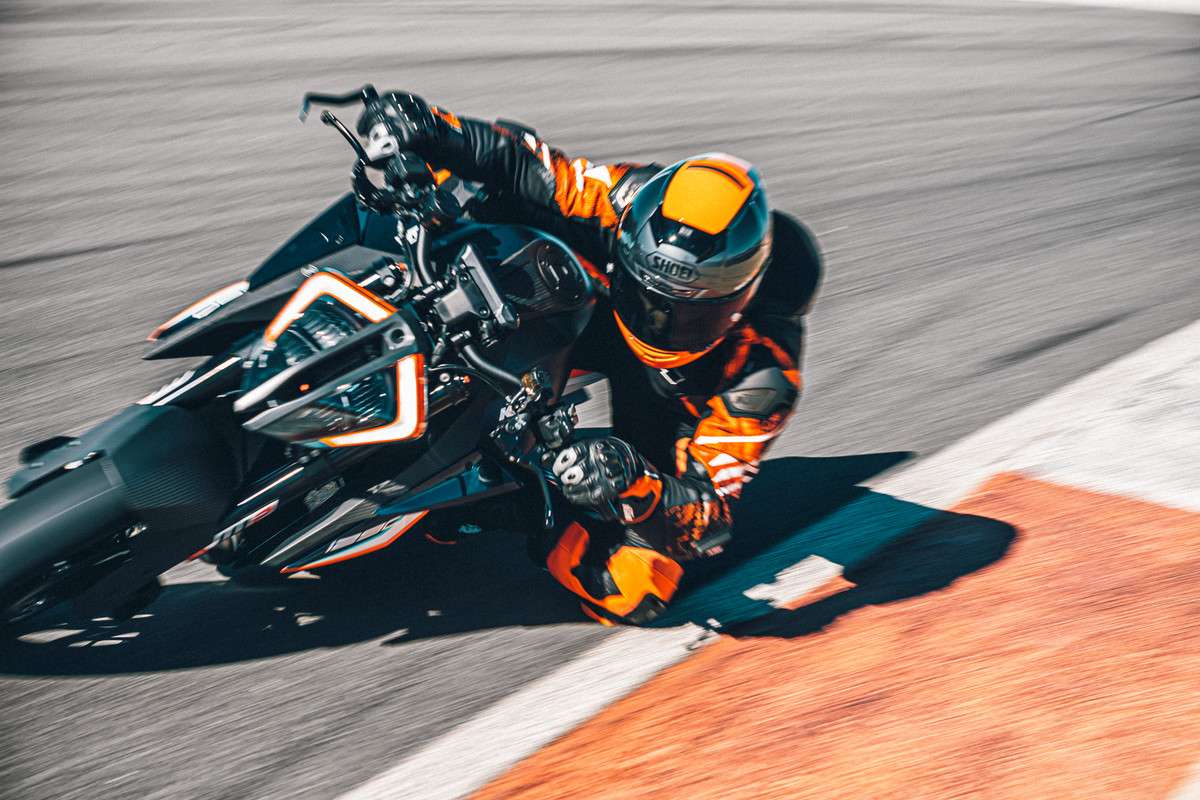 When news broke of KTM’s first ever double-R I knew Don would dance a little jig, squeal with delight and then have to cross his legs while the panic set in as the pee tried to burst forth from his over-excited bladder. You can tell that he loves the idea of this Super Duke RR, and I can’t say I disagree too much, though it definitely isn’t so amazing that I feel the need to soil myself.

Our favourite sports naked bike, our favourite road bike in the world, basically, and for obvious and easily understandable reasons, is KTM’s 1290 Super Duke R. (I still rate Aprilia’s 1100 Tuono so highly that I might prefer that if I got out of bed a different side one morning, or I just feel like being normal and disagreeing with Don).

Last year the bike got a serious update, mostly to the chassis because the 1301cc 180hp V-twin was already bonkers, and it now has an air of sophistication to its handling that was previously missing. It is still as devastating a weapon as ever, just with its rough edges polished a little.

Now, perhaps feeling a little guilty at having taken their Beast and civilised it somewhat, the orange psychos in KTM’s technical department decided that what was needed now was a more extreme version. A Beast with, as they themselves say, a meaner streak.

Throwing lots of carbon fibre at it, a set of lightweight wheels and a new single-seat subframe means the bike has shed 9kg. They’ve done nothing to the engine, but the weight loss means its 180hp is now matched by a 180 kilo weight, so it achieves that magic 1:1 ratio of horsepower to kilos.

There’s some improved electronics specifically aimed at track riding, the suspension is upgraded to the very best WP can offer and there’s a set of super-sticky Michelin tyres. Oh, and they’ve added another R, so this is the 1290 Super Duke RR. All of which makes it the ultimate trackday weapon, apparently.

Don obviously thinks this is fantastic, and I won’t deny that it’s all quite impressive, and I’m truly glad KTM has done it, but I wouldn’t stress about hurrying to snap up one of the 500 that will be built. In fact, they sold out in under an hour once they became available, so if you want to stress then you can worry about how much a scalper will demand for one still in the box.

Don says that makes me a grumpy old man, but I say, why lose a pillion seat and pay more money for a suspension upgrade that you’ll never be able to exploit, because you’re not Jeremy McWilliams, or any other ex-MotoGP racer. Chances are it will feel more stiff and less fun on the road, and if you want the ultimate trackday weapon buy something with a fairing, a set of clip-ons and another 30hp – there’s plenty of those to choose from.

The single R Super Duke is already too much bike for us mere mortals, it is brilliantly thrilling, borderline stupid and I love that it can be sensible as well if you want. Get that, drop a bit more of the folding stuff in the Powerparts catalogue for some carbon and a few anodised odds ’n’ sods and have a personalised bike that can do trackdays and live on the road, even take a passenger from time to time.

That doesn’t I think, make me old, it just makes me less susceptible to marketing hype. Which reaction you have is up to you.

I think I’ll stay with KTM for a moment and their naked road bikes to confirm that the 890 Duke, that was released as the top R version last year, is now available as a base 890 Duke. Slightly lesser brakes, suspension and with 115 instead of 121hp, but offering a fairly serious financial saving. Price differences in Europe suggest it might be about R20,000 more affordable here in South Africa.

One thing I do know is that it will still be a fantastic bike. You might notice the slightly less sharp brakes – which could be a good thing for road riding, and you might, possibly, notice the 6 horsepower missing right before the redline, but otherwise this is the same light, punchy brilliant sport bike I rode last year, just a bit friendlier to your wallet.