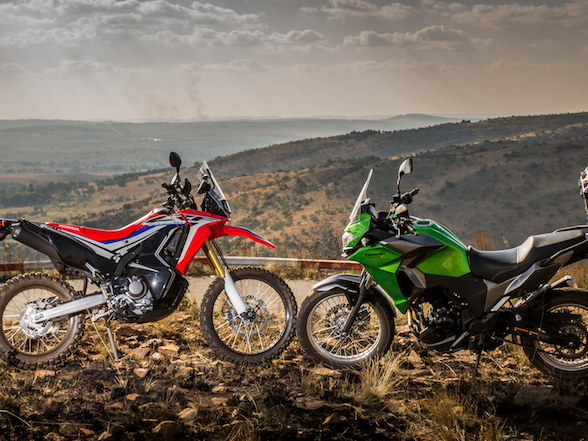 For years, South African adventurers have begged and pleaded on every forum and social media platform for a lightweight, simple and capable adventure bike. Good news – now there are two of them. Donovan Fourie took a ride on both and made some discoveries.

While throwing various opinions and subjective views might draw a compelling picture of each of these new lightweight adventurers, the sort of people who want to travel a decent mileage, often over desolate and less than hospitable terrain, understandably prefer something a little more concrete, logical and objective. If we do stray into our usual subjectivity then please accept our apologies. We are only children, after all. To assure not too much wayward digression, here are series of tests and challenges.

But first, what are they? 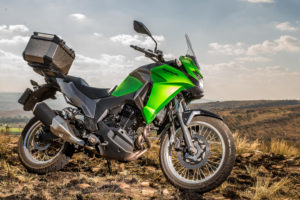 Here we see two motorcycles that tackle a problem from two opposite directions. First we have the Kawasaki Versys-X. This 296cc, liquid-cooled, parallel twin motor started life inside the Ninja 300R and Z300 sport bikes. It was famous for its high revving, its high power output and its racetrack success.

In this instance, it has removed its jogging shoes and replaced them with some hiking boots and a safari hat. In this guise it certainly looks the part. The suspension has been raised, there’s more touring fairing and bigger, spoked wheels. 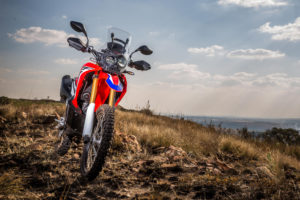 The Rally began life as a CRF250L, a bike renowned for its off-road prowess with on-road legality. It’s basically an enduro bike with indicators. Now, it has “Rally” added to its name and receives some beefed up equipment. Most obvious is the rally fairing that looks as though it was taken directly off the CRF450 rally bike used by the Honda team at Dakar. The screen is almost completely vertical and the asymmetrical LED headlights give it a menacing look.  Apart from that, visually it is exactly the same as the L. The seat is still very off-road, there is a minuscule digital dash offering the essential information and not much else.

Apart from ABS, neither has any electronic aids, which is probably preferable for people who want a motorcycle with as little as possible that can go wrong.

Let’s stop talking and get on with the tests.

Speed matters, obviously, hence we lined up on a straight smooth tar road near Krugersdorp and had at it.

To be fair, the race was over a moment after it began. The Versys-X gave a sight hesitation at lower revs before gaining momentum and leaving the Rally as a spec in its rear view mirrors.

Most manufacturers, when building something like an adventure tourer, will “re-tune” the motor (read: make slower) letting them offer more bottom end and a more subtle top end acceleration. But this is Kawasaki and, as we’ve seem from the likes of the H2, they are stark raving mad. “Detune our bikes? We think not.”

Thus you are looking at the full sport bike 39hp and 26 Nm of torque, driving through a slightly shorter final drive. It takes a bit of revving to feel the full effect, but once it is there it is fantastic, taking it up to a speedo top speed of 165km/h.

The Honda pulls effortlessly from almost idle. Unfortunately, it pulls with just 24hp, a good 15 down on the Kawasaki, and a maximum torque output of 22.6 Nm. This will take it to an eventual top speed of 144km/h.

However, for the more relaxed adventurer, both can cruise fairly easily at the 120km/h speed limit.

Then, the handling race

We then went to our secret testing road (the one winding down the hill near the Krugersdorp Testing Station, past the sewerage farm). It’s a short three kilometer stretch winding up the hill through a series of tar hairpins. This will test their grunt, their braking and their handling.

Naturally, the Kawasaki blasted off into the lead, and then didn’t exactly pull away. Both motorcycles are light and nimble through the hairpins, both have hugely proficient brakes, especially the Honda whose single front disc is 40mm larger than the standard 250L bringing it up to 296mm. The Kawa is not far behind at 290mm.

Where the Honda was making up ground was coming out of the tight hairpin corners. The Kawa needs the revs to climb before the power kicks in, whereas the Honda feels as though its horsepower graph is a straight line.

The Kawasaki did win, but the Honda was hanging onto its coat tails.

And then, we stray off-road

Atop the hill, there is grasslands running along the ridge – well, we say grasslands, it’s more like un-treaded rocky wastelands with grass growing here and there.

In the process of testing these bikes, we brought them to this places twice – once with Harry Fisher for filming of The Bike Show, and again with my mate Shaun Wray for some magazine photos.

With Harry it was a surprise. I had taken two wins on the Kawasaki and was feeling damn good about myself. Then Harry shouts out: “okay, let’s try some off-road! Follow me!” and barrels off into the rugged unknown.

The Kawasaki’s suspension travel has been increased to 130mm front and 148mm rear with the ground clearance lifted to 180mm helped by a 19-inch spoked front wheel and a 17-inch spoked rear, all in a package that has a wet weight of just 175kg. There are trail adventure tyres fitted as standard, which did well on the road and smooth dirt. This was something else.

Harry buggered off on the Honda and I was left slipping on loose grass, struggling to clear rocks and getting stuck. Eventually, after some time hopping around the area like a Jack Russell discovering freedom for the first time, Harry returned, helped me un-stick myself (install obligatory mockery throughout) and we set off after a successful shoot (see The Bike Show YouTube channel for the video).

We returned again with Shaun, but this time I was on the Honda. Yes, it is slower than the Kawa, and less homely, feeling more like an actual rally racer than an adventure tourer. We turned onto the intense off-road and Shaun had similar difficulties to me on the Kawasaki. On the Honda, I was repeating Harry’s Jack Russell act.

The Kawa is beefed up for adventure, but the Honda is practically an off-road racer. The suspension travel is a mind-boggling 280mm up front through the 43mm upside-down forks and 275mm through the rear shock. The front wheel is 21-inch with 18 at the rear – both fitted with knobblies standard – lifting the bike to a ground clearance of 270mm. All this on a bike that weighs just 157kg wet. Obviously it made little work of this little koppie.

What we have here are two motorcycles in the same category but serving two very different functions. The Kawasaki is a tourer-adventure, while the Honda is a hardcore off-road adventure.

If you want to do 2000km in a weekend over tar or normal gravel roads, the Kawa will probably serve you best. It is comfortable, homely and the motor can keep up decent speeds for long time periods. And the 17 litre tank, as opposed to the 12 litre on the Honda, won’t go amiss. There is nothing else for the price of R74,995 that will do this.

If you wish to ride to Lesotho and then go over the mountainous country, exploring paths the GPS would rather you didn’t, then the Honda is for you. It may not have the comfort of the Kawa, nor the power, but there is no terrain that will thwart it. It costs R85,000, a good deal more than the Kawa, but I fear that the die-hard off-roaders won’t mind.