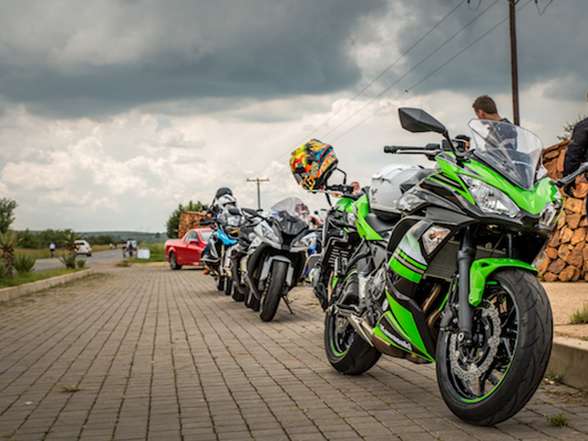 “Ninja” is an important word in the vernacular of motorcycling. Most motorcyclists, upon the utterance of the word “Ninja”, think not of steely-eyed men clad in all black awaiting the next kill. Far more ominous is a devil-eyed motorcycle clad in a green fairing and a countenance that says pure death. In this case, it’s the new Ninja 650.

It isn’t without due consideration that Kawasaki will put that name to anything, but the 650 seems to have passed the entrance tests. In a previous life, Kawasaki had the ER-6 brothers – the f and the n. While seemingly joined at the hip throughout their adolescence, as often happens, they have gone their separate ways in adulthood. The n has joined the Z clan together with the Z1000 and the Z900 that is on the trip with us. The f went the Ninja route, and so has been given a sincere make-over.

The previous ER-6f was mostly an ER-6n wearing an ill-fitting green trench coat. This new incarnation is no longer dressed by its mother, now donning the clothing of its Ninja clansmen. And it looks pukka. Many a passerby would be forgiven for giving it a glance and presuming it to be its bigger ZX-6R or even ZX-10R brother.

More so than new colours, the 650 also sheds its previous steel perimeter frame to make way for a steel-trellis version that was passed down to it by the king of all Kawasaki madness – the H2R. This has quite an impact. While this bike keeps the parallel-twin 649cc heart from its previous life, interference by the EU and their Views means that it now pushes 68hp, a drop from its previous 72hp. While this seems tragic, the day is saved by extra torque in the midrange, plus a weight of 193kg, a massive 7kg decrease from the previous, heavier framed version. This is even more amazing given that this new model complies with Euro4 emissions that adds a good chunk of extra metal to the bike.

We buzzed along the sinuous Cradle Road near Johannesburg, letting the warm Autumn sun shine down on us, reveling in the joyous twists and turns that carve their way through the Cradle of Humankind. We are very sure that our far-strung ancestors that inhabited these lands thousands of years ago saw these hills very differently, and more in a one-at-a-time fashion and so, when people refer to the good old days, we are inclined to disagree.

This 650 twin motor has always been the revvy sort, starting with an irritable gargle at the bottom end and crescendoing in a sonorous roar. With Kawasaki’s retuning, the bottom end irritable has been replaced with bottom end irate as it picks up better, reaching the top end growl far quicker. The previous model was fun to rev, as you listen to it slowly crescendoing, where this one is fun everywhere, throughout the rev range. It’s fast, but not in a tense every muscle H2 manner. Top speed is somewhere close to 200 km/h and the steepest hills around Magaliesburg are handled without much in the way of downchanging.

But this is only where the joy of this motorcycle begins. It is good at blasting down the Cradle Road chasing others on faster bikes, but it is also good everywhere else, and by everywhere we mean everywhere. Its light handling and low seat height means that it can handle any urban road with ease. It has a sit up position, uncommon in the Ninja range, an ergonomics that is roomy and has a screen that somehow keeps its sporty appearance while delivering good wind resistance. After two days of riding, I felt nothing. No pains, no creaks, no fatigue, just nothing. If you were to ask me whether I’d be okay riding it the 1600km distance to Cape Town the answer would be “yes I would”.