Kawasaki H2R: Still the maddest, most brutal homicidal maniac to ever to ravage the motoring world

Three years ago, Donovan rode an H2R around Phakisa for The Bike Show. To date, it has 3.5 million views on YouTube, and he is still frequently questioned about it both in South Africa and when he goes overseas. There have been some impressive feats in sportbike progress in the three years since then, but nothing yet comes close in terms of pure madness, pure terror and pure adrenaline-junkie thrills. And isn’t that what motorcycling is all about? 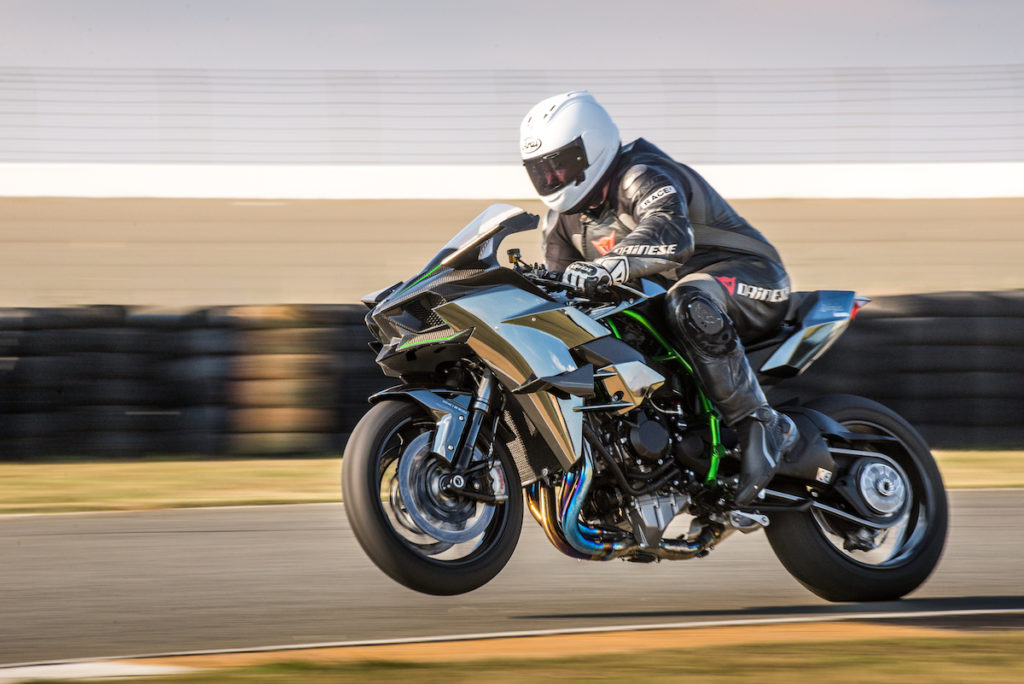 Story: Donovan Fourie
Pics: Meghan McCabe
When the track-only H2R was first unveiled at the Intermot Show in 2014, there were many questions swarming through the ethereal social media plane. One such question fielded on my Facebook wall was from an outspoken gentleman from the racing fraternity: “How is anyone going to put 326hp on the ground? What is anyone going to do with 326hp?”

My answer was simple, concise and straightforward: “Open the throttle.”

It’s true that as a track machine, the H2R is lacking – it will not do the lap times of even the 2014 litre superbikes, and will be wholly outpaced around a track by the subsequent models especially the likes of the Ducati V4R and the Aprilia RSV4 Factory. However, this is presuming that the rider’s goal is to set lap times. Sometimes, the rider wants to scream in delightful terror. Until this day, no such motorcycle has proffered anything close to the H2R. 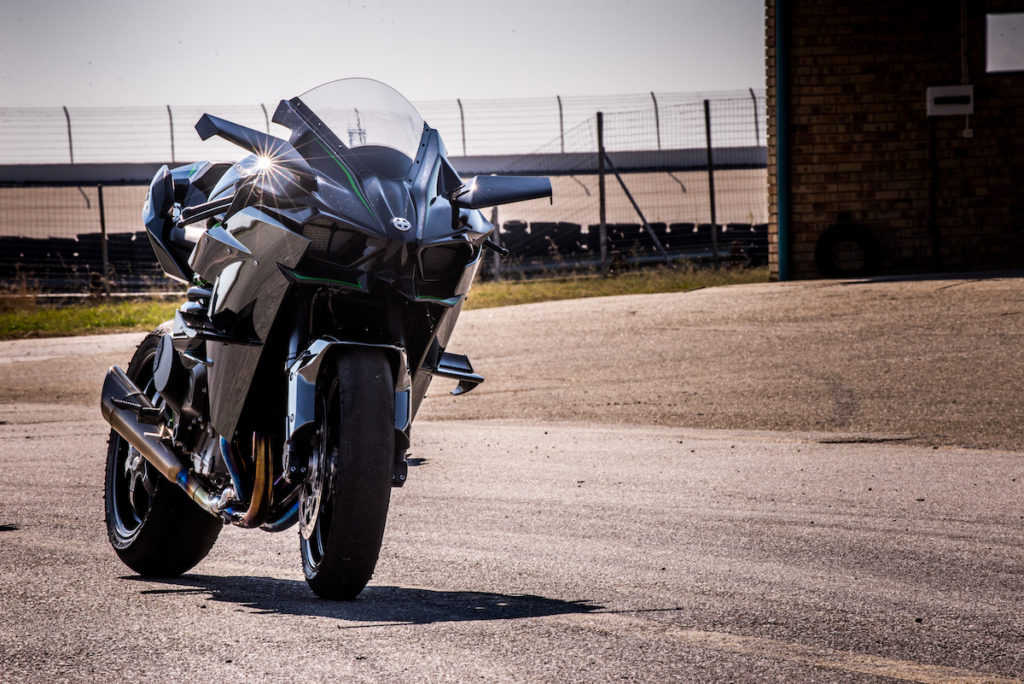 The usual procedure for shooting a road test for The Bike Show happens like this – firstly, I will research the bike and ride it, and from this, a script will magically appear in my head. From the script, we can work out the location and what shots we need. Sometimes, I cannot ride the bike before the shoot, so I’ll do the research before and then ride the bike in the morning getting some onboard shots and perhaps some ride-bys. The crew will then get on with shooting details of the bike while I furiously attempt to throw together a believable script, distinguishing between stand-up links to camera, voice-overs and onboard comments.

Some people like shooting off the cuff, making up what they’re saying as they shoot. You can tell which videos are shot like this because they are universally sh*t.

The H2R we rode was a friend of mine’s who looked at his bank account and saw that he had the R850,000 needed to buy one. He had booked Phakisa for a Friday, invited us to join and film his new baby, a baby that could very legitimately be named Chuck. We arrived at Phakisa, got the kit set up, and the crew got ready to start filming some shots of me riding so I could do the usual procedure of figure out a script.

“Guys, I want to do this differently. Put an onboard mic on me now.” 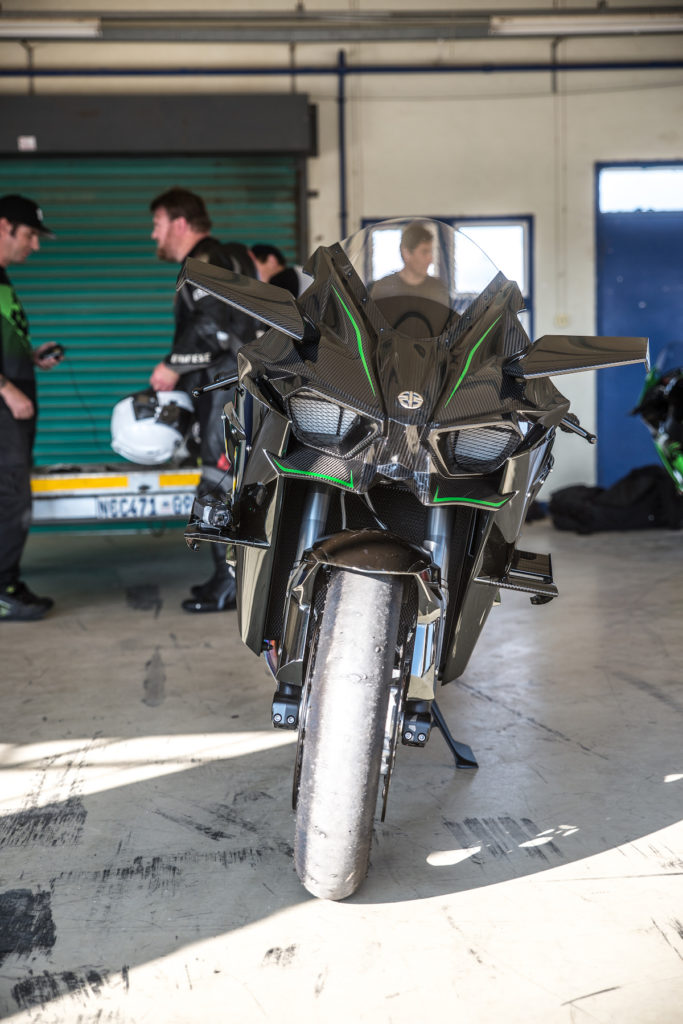 There was a moment of bewildered silence as the team digested what I had just suggested. It would mean no script, no direction and making it up as we go along. In other words, sh*t. Still, I insisted. This bike isn’t about numbers, about functions and logic. It’s about emotions, mostly terror. And that has to happen in real-time.

The emotion was made clear when the bike was first unveiled in 2014 to mixed reactions. As you would imagine, there were people stunned and thrilled at the idea of 326hp available to us mere mortals. However, there was also a school of thought – from similar people critical of its lap time prowess – that it was just ugly, citing the likes of the Italian and Japanese litre bikes that did things to them in their underpants. My answer to these criticisms is simple – the H2R is not a bikini model that wants to tickle you in your happy places. The H2R wants to rip your liver out and force you to watch as it devours it slowly and messily. That’s why it looks more like something out of an Alien movie, and you should be afraid.

After leathers were zipped up, mics were running and a short plea to whichever deities happen to be paying attention, I climbed aboard, started it up and . . . holy sh*t! It barked into life like a rabid bear. The short but sharp “yip” stemming from my inner soul was drowned out by the exploding megaphone exhaust – this is not a street-legal motorcycle so why use a street-legal exhaust?

Fine. Okay. Keep your head, Donovan. Click it into gear and let’s see if we can at least make it down pitlane. After pulling off without stalling – always a relief when the cameras are rolling, and there’s a small crowd – the H2R growled its way ominously down the pitlane, its passenger shaking to the core despite failing efforts to be brave and manly. 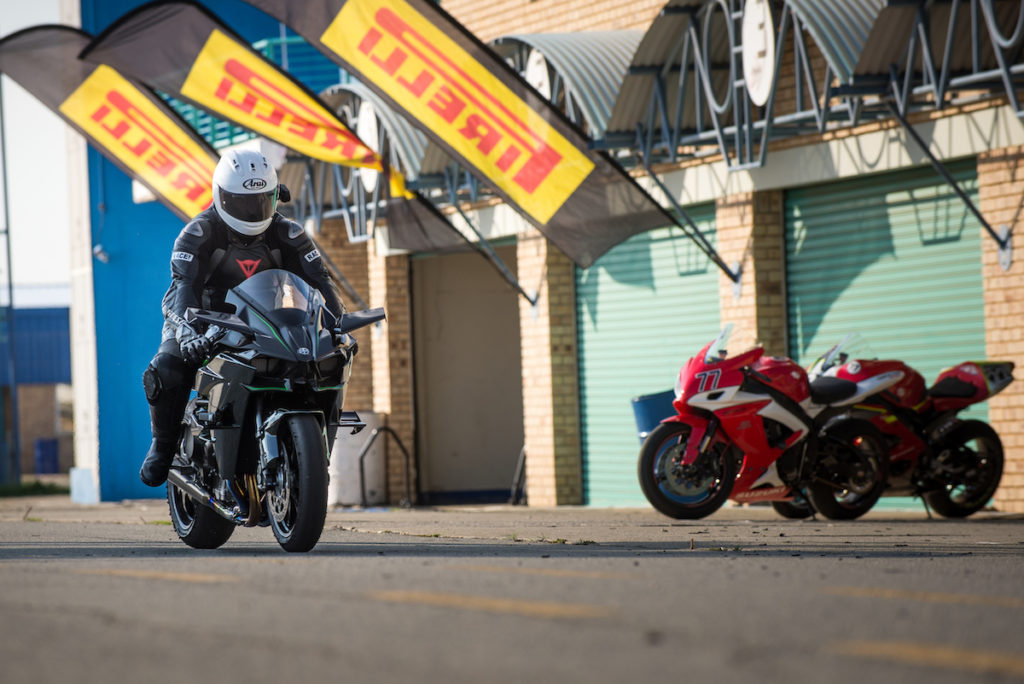 The first lap was a warm-up lap. Obviously. It’s a good idea to let the engine warm-up, the tyres warm-up, the brakes warm-up, the frame warm-up, the electronics warm-up and it definitely isn’t an excuse for the sweating rider to delay the inevitable opening of the throttle.

After a full lap of vailed procrastination, it eventually pointed down the pit straight where cameras and crowds were awaiting, expecting a full-throttle blast. Like a coward standing on the edge of a bungee bridge with peer pressure breathing down his neck, I opened the throttle. After all, like the bungee bridge, once you take the plunge, you find that it’s not so bad and you’re glad you did it, right? Honestly, what’s the worst that could happen?

Two seconds later, the tiny stub of tar that was previously a full straight was over, and my breath was gasping desperately to keep up with my heart rate that was now clocking five million beats per minute. 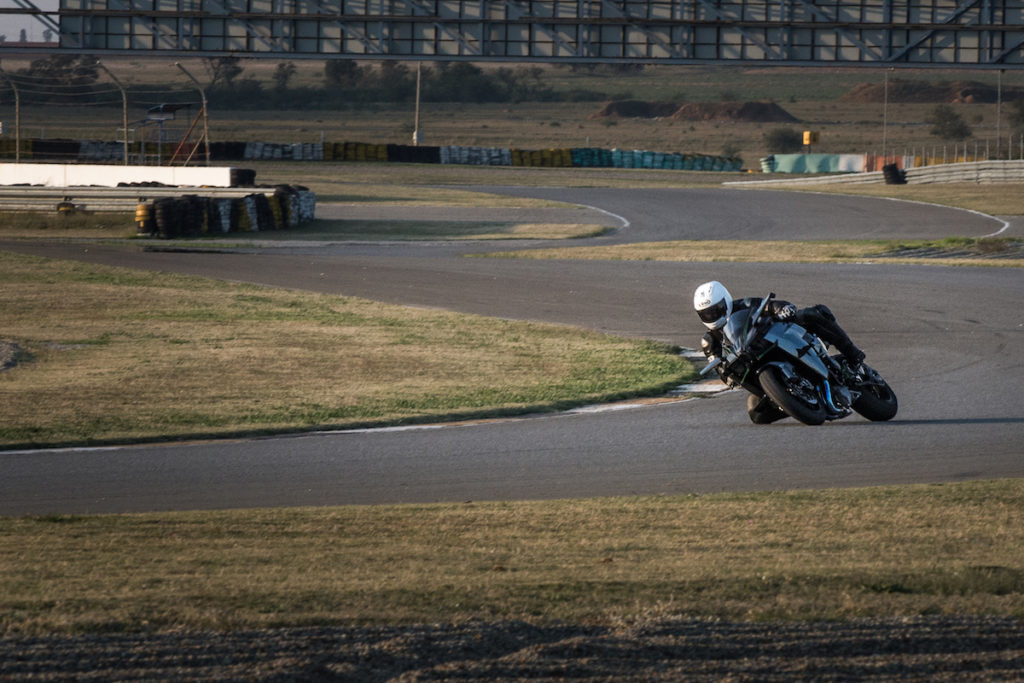 On the plus side, I was now knee-down in a corner that meant, in stark opposition to the norm, I could rest a bit. The next “straight” was no better, nor the one after that, as they all disappeared in a nefarious howl of insanity. These “straights” that we usually enjoy on normal superbikes as the bit of resting between corners were now the tiny little dots between rest in corners.

If you don’t believe me, look at it like this – most people reading this have experienced a litre superbike pushing in the region of 200hp and know the burden of attempting to tame one of these machines. Well, the H2R is one of these litre superbikes with the power a slightly tuned 600cc added on to it. We all laud MotoGP bikes for their power and acceleration, and yet here we are with 46hp more than them. And we are not toned, fearless MotoGP superheroes but slightly overweight, mortals with a mortgage and work on Monday.

The video on YouTube was not scripted, but it was emotional, and that is what this motorcycle is all about. Compared to litre superbikes, the H2R is slow and clumsy around corners and will never get close to doing their lap times, but that is not why you buy one of these. You buy it to get to one of the straights, take a deep breath and then open the throttle.

And at that stage, who scares what your bloody lap time is?