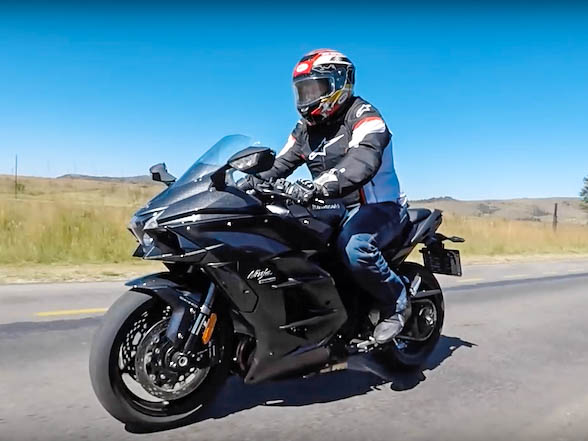 Story: Donovan Fourie
The supercharged Kawasaki H2 is mental. It is beyond mental. It is brutally, savagely, barbaric, and the only street motorcycle that is truly terrifying. It caused such a stir that it was voted as the Pirelli Bike of the Year. This decision caused quite a stir also, with most of the public nodding in agreement, but a few wanted to know when these bastard judges would choose something less elite and more affordable. This is a good point, but then nothing that is affordable has moved the motorcycle world more than this, the first supercharged production bike. 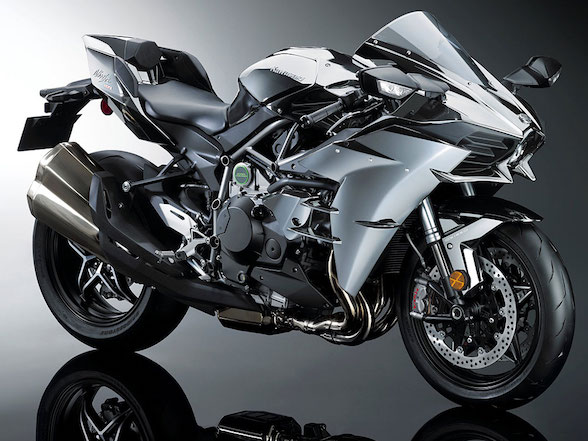 There were more criticisms, with some people pointing out that this motorcycle pushes the same horsepower as the ZX-10R but weighs more and is more expensive. They then went on to question the judges’ frame of mind, particularly in the intelligence department. The answer is simple: stop reading the spec sheet and go actually ride it.

Kawasaki claimed that the horsepower output was 200hp, but dynos reflect a more accurate figure of around 225hp. This means that Kawasaki is the first manufacturer in the world to actually under-claim their power output. The reason for this is simple – they don’t want to get into trouble. Already people of Brussels are stressing about the speed of motorcycles. Imagine their reaction to a bike that looks like a jet fighter and pushes a power output that they would deem as “unacceptable”.

In one episode of The Bike Show, we lined up a ZX-10R, a ZZR1400 and an H2 up for a roll on. The ZZR1400 did a commendable job, but ultimately the victory was claimed by the H2. Unquestionably.

While the H2 is mean and fast, it has its issues. Firstly, at R350,000 it’s expensive. At 238kg it is heavy. This is all understandable if it were comfortable, but it has much the same perched seating position as the ZX-10R. And there’s no back seat. So it’s just fast. In a straight line.

We mentioned our concerns on The Bike Show and it would appear that Kawasaki have listened because, behold, the H2 SX. 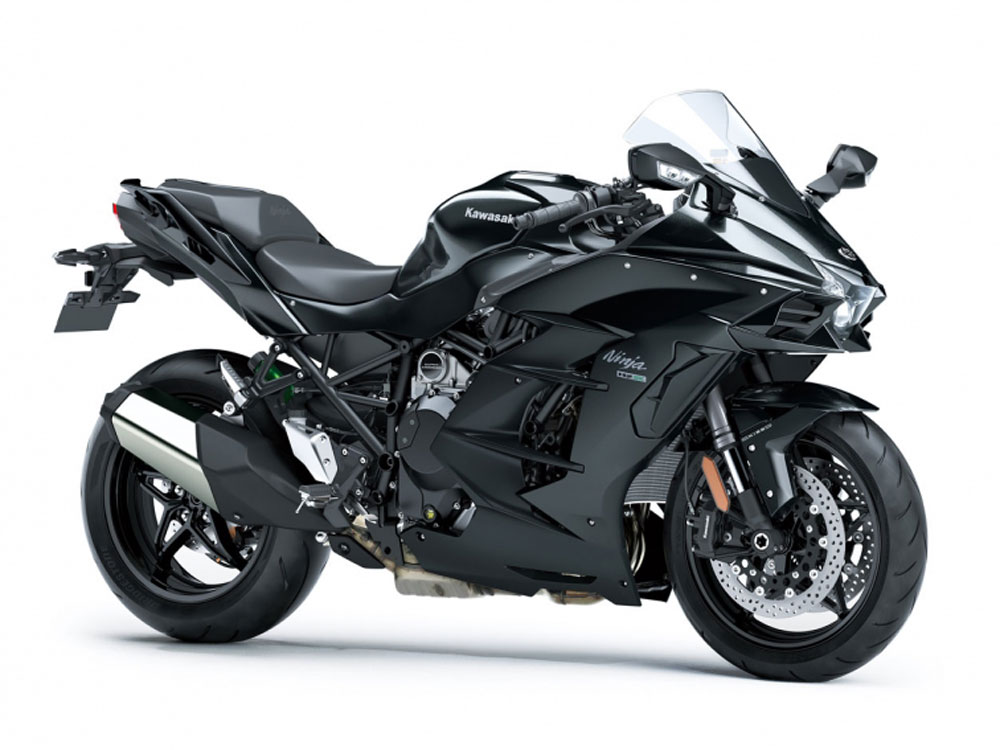 The H2 part of the title tells us that it is aligned with the H2 family, and it has the signature 1000cc, four-cylinder supercharged motor and the steel-trellis frame. It also has the signature jet fighter appearance that makes it look like it wants to swallow orphans whole.

Then it receives the SX bit, much like that of the Z1000SX. This is code for touring, and here is where Kawasaki listened to us. While the front of this bike is all orphan swallowing, everything behind the front fairing says mothership. It looks huge, with a giant touring seat accompanied by a spot for a hanger-oner. Fuel capacity is up to 19 litres, the screen looks taller and everything looks like a nice place to be.

This could be interesting. H2 power with the comfort of an SX? Yes please! Wait, not quite, says Kawasaki. The cams, the ports and the supercharger have all been changed to move the power lower down the rev range and offer an easier ride. In fact, Kawasaki’s aim was not outright power but rather performance with fuel efficiency. Some of the speed mongers reading this will immediately feel a bit of sick in the back of their throats at the very thought of this, but it’s not all doom and gloom. They claim that they’ve tuned the SX to feature the same performance as the much lauded ZZR1400 with the fuel economy of a Versys 1000. That’s a bold claim, so we brimmed the tank and set off on one of our usual breakfast runs.

This was a terrible idea – although a hugely accurate one. When a bunch of mates get together for a blast to Magaliesberg, speeds of less than 160km/h are a rarity, and all thoughts of riding efficiently disappear in a haze of unnecessary bravado. And thus a fuel efficiency of 11 km/L was achieved. This is a dire statistic, but keep in mind that we have done similar runs on 1000cc superbikes where we saw figures of 7 km/L. In that light, the SX didn’t do too badly. 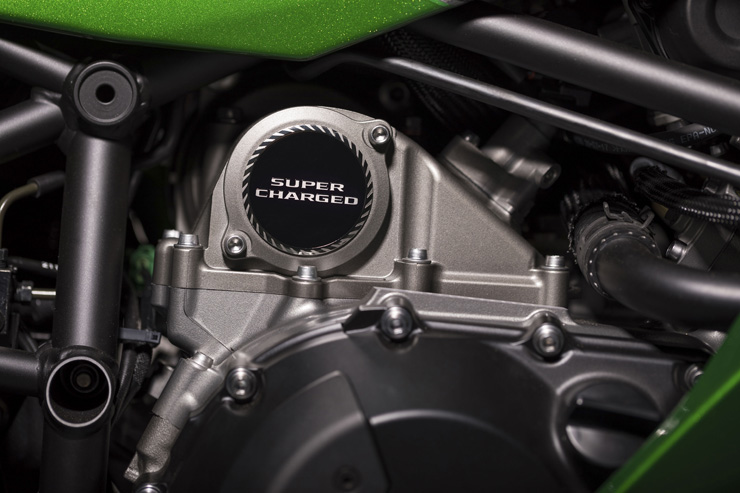 Then there is the performance aspect. The obvious solution is to get hold of a ZZR1400, line it up next to the SX and have a roll on. This should be interesting indeed. The SX pushes the same 200hp claimed by the H2, and with a bit of luck this figure will be under-rated just like the H2. The ZZR also has a claimed power output of 200hp, but pushes 159Nm instead of the SX’s 137. At the same time, the ZZR weighs 269kg where the SX comes in at 256kg. We really have no idea which way this is going to go.

Unfortunately, there was a spanner in our otherwise brilliant plan in that there were no ZZR1400 demo bikes available. Eventually, the good people at Fire It Up loaned us one off their floor, which was a life saver. The only hassle is that this bike had had some work done – a full Yoshi exhaust system, a quickshifter, a Power Commander and a flashed ECU. Still, in our experience these modifications do more for the throttle control and drive out of corners rather than lumping on straight line performance, and so Harry lined up next to me on the Fire It Up bike, while the SX rumbled under me. The procedure  is straight forward – pull off in first gear, roll up to a marker side by side and then then gas it.

We thought it would be a close competition, right up until the ZZR1400 buggered off into the distance. Okay, maybe I didn’t roll on soon enough. For the next run, I actually jumped the start slightly, and still the ZZR buggered off and was gone. We then swopped bikes – look, I’m under no disillusions about the extra tonnage the bike I’m riding has to carry – and yet still the ZZR leapt forward and soon the SX was but a speck in the rear view mirror.

This is not good at all. 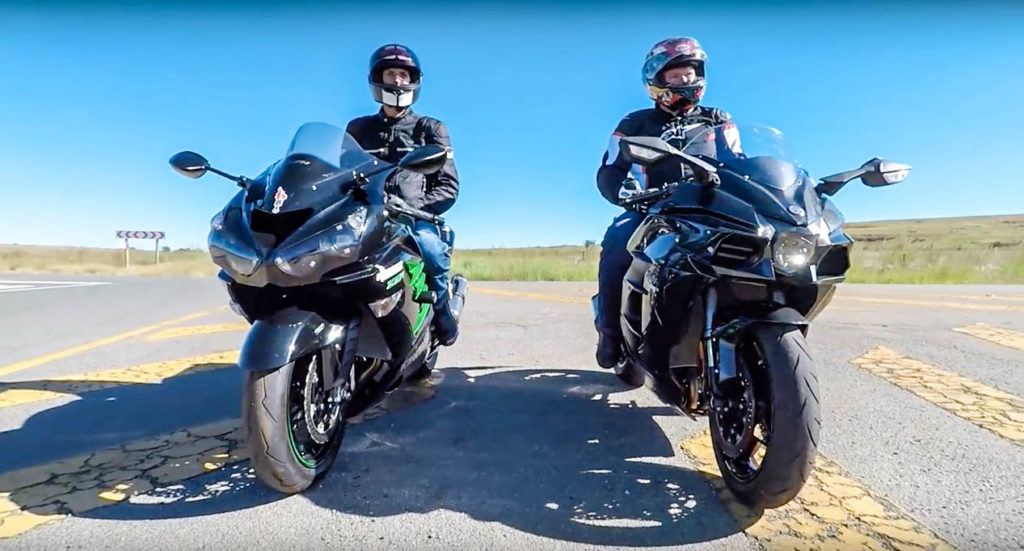 Yes, the ZZR was not standard. Maybe without the mods, the finish would have been closer, but it’s unlikely that these mods gave it the advantage that it had. We are pretty sure that it still would have won even without the extras. More so, the ZZR won in Joburg, that is more than a mile above sea-level. This means that it is 18% down on power compared to the coast, whereas the supercharger negates much of that loss on the H2 SX. So, if anything, the mods were making the dice more accurate.

It gets worse for the SX, because its selling price is R260,000 whereas the ZZR is a more attractive R228,000. Does this mean that Kawasaki has failed us, and we should stick to the trusty old ZZR? In our professional opinion, hell no!

Yeah, the ZZR has more straight line gusto. It’s still a helluva impressive machine, but there is where its benefits end. It’s a massive boat of a motorcycle, with handling that will be rivalled by continents powered by underground magma currents. And despite its massive size, it has a cramped seat position, where your legs might start losing blood flow and fall off. More than that, it does feel like a dinosaur. The way it makes power, the way the throttle feels, the brakes, the suspension and the looks all feel extremely outdated in a world of modern engineering. This version is only six years old, and yet motorcycling has moved on so much that it already feels as though it’s from a different age.

Enter stage left, the H2 SX. Yes, it has not the straight line bludgeoning that the ZZR offers, but it is hardly slow, and besides the ZZR, the original H2 and possibly the Suzuki Hayabusa, there is nothing that will touch it. More so, it feels modern. It feels together. It feels really good. 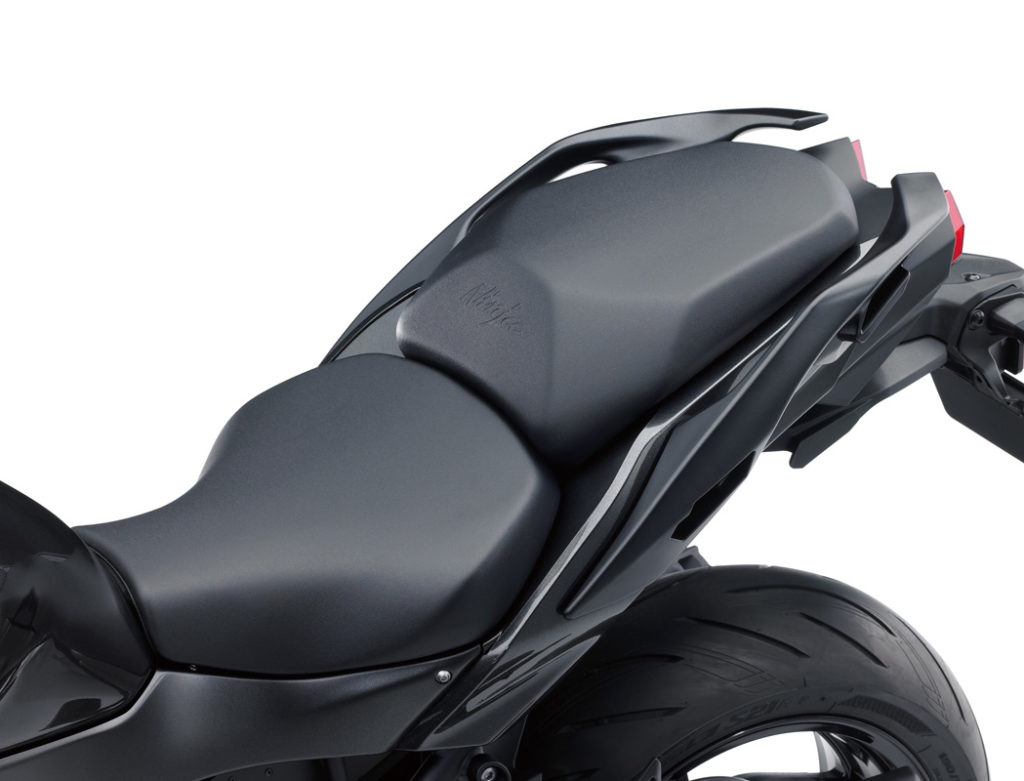 While it is less of an ocean liner than the ZZR, there is somehow more room and more comfort. It’s a little taller than the ZZR so there is more blood flow, and yet your arms take very little strain. The screen will be outdone by the thoroughbred tourers, but it is on par in the hypersport market in which it finds itself.

It weighs 256 kg, and we are not going to pretend that it is a light weight. Yet it can go around a corner, and at some pace too. The world launch of this bike was held at the twisty Estoril Circuit in Portugal, not because Kawasaki thought it would be an excellent replacement for Johnny Rea’s ZX-10R, but because they were that confident in its turning ability. Yeah, you will never break a lap record, but you certainly won’t need a tug boat’s assistance either. 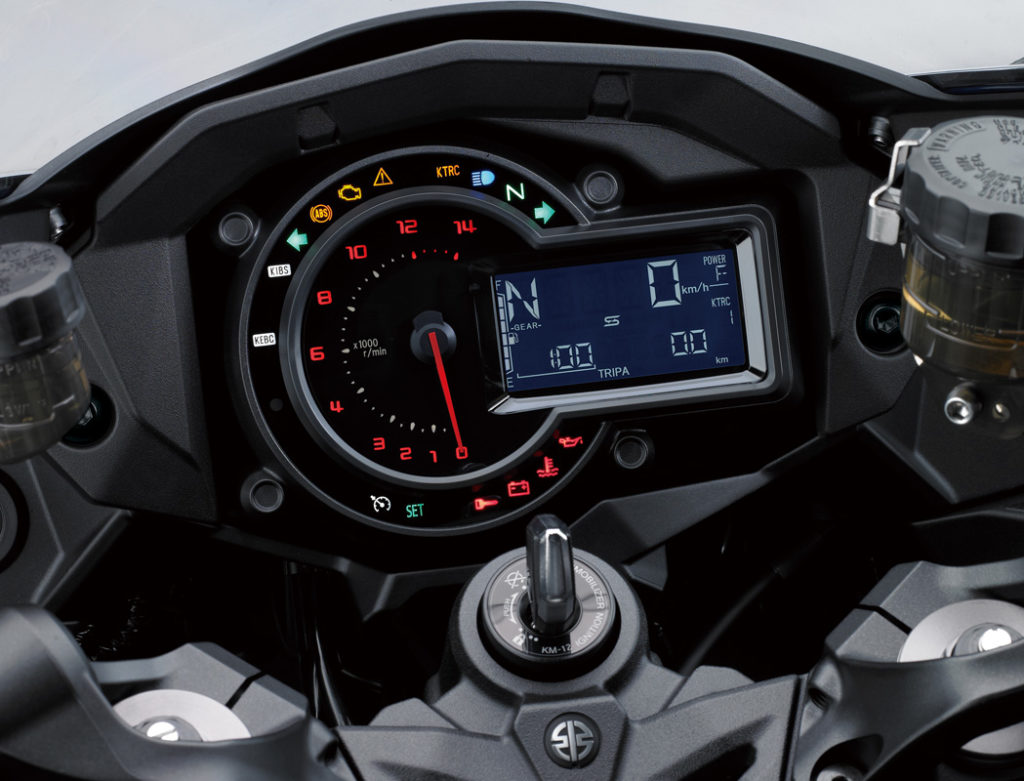 Then there is the pantomime effect of the SX. Like the H2, the supercharger transforms a slightly un-dramatic four-cylinder screamer into a Vin Diesel thriller. The motor has some boom to it, but there is the ever present whish of the supercharger grabbing volumes of air and forcing it into the cylinders that adds so much more drama. And when you shut off while the revs are above 10,000rpm, it chirps at you like an angry, drugged-fuelled marmoset. Most people think this is the waste gate dumping excess air, but what it actually is is the tips of the supercharger propellers breaking the sound barrier. How cool is that?

Yes, the H2 SX does cost a fair penny. No, it isn’t has fast as a ZZR1400. And it probably isn’t as fuel efficient as a Versys 1000. But it is utterly brilliant. And yet this isn’t the one we would buy. Kawasaki also have an SE version of the SX with a quickshifter standard, an LED dash, turning lights and a few extra gadgets. At R300,000 it is R40,000 more than the SX, and very much worth it. Go buy that one. Right now. Stop reading this and get on with it, damn it!

See the video from The Bike Show TV below: