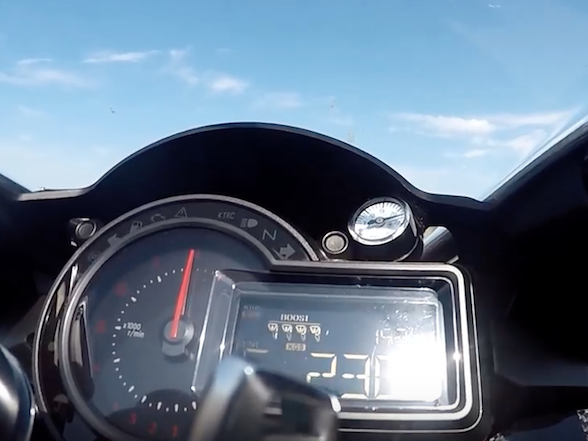 All motorcyclists have had this nightmare – your motor blows up at high speed. Will it lock up the rear wheel? Will oil get all over the rear tyre and cause it to slip uncontrollably? Will it catch fire?

Our concerns are now answered thanks to this video posted by YouTube user BOOSTEDH2. It is taken during a mile run at the Loring Mile Harvest Event in the US State of Maine that sits on the most northern coast of the Atlantic Ocean, right on the border of Canada near Quebec. The runway they were using is one of the longest in the world, coming in at 4.2 km of straightness.

The bike is a modified Kawasaki H2, that has had its horsepower improved from the standard 220hp (not 197hp that Kawasaki claims so that the EU doesn’t shout at them) to 300hp which is a fair old chunk more oomph. This is partially thanks to the extra boost of the supercharger that was then pushing 1.6 bar (24 psi). It has had some mileage put on it – more than 16,000 km that included more than 300 passes down the 1/4 mile, more than 50 passes down a standing mile and a good few 1.5 mile runs and more than 1000 pull offs on the public road.

The video shows the rider attempting two mile runs.  During the first one he achieves a clock speed of more than 230 miles per hour (roughly 370 km/h) which was a true speed of 219 miles per hour (350 km/h). During the second run, the rider was nearly topping out the revs in fifth at 188 miles per hour (300 km/h), with the click up to sixth gear imminent, when things went horribly wrong including a conrod going through the block and many other vital organs.

The owner says that he is planning to rebuild his H2 and if people think that it was modified before, wait until next year when he is going to unleash something special.

See the full video below: