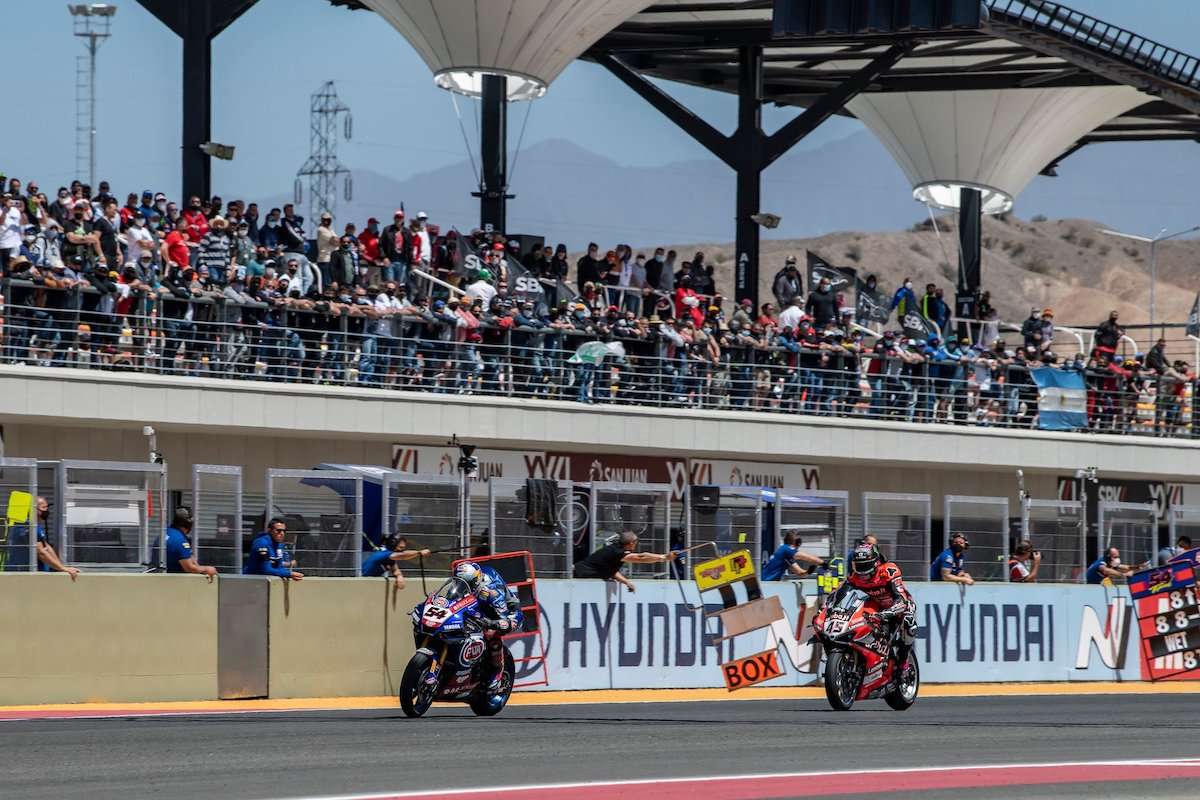 Taming violent storms of the sinal kind, I bring you the penultimate Race Two Roundup.

Nobody crashed. They hardly ran wide even. This leaves me with very little to write. Bother.

Redding didn’t repeat his first-turn fluff, and kept the pressure on Racerfastshoes throughout the session.

Rea dwindled in a repeat of his own performance from yesterday’s Race One.

On the last lap Redding ploughed past Toprak, overploughed, and Toprak calmly took back his lead. It ended up being a race to the line between the two frienemies – a race Toprak won by half a Yamaha.

Thus, Toprak claimed his second Superpole Race win, Redding took second, and Rea trundled past the flag in third. At least he improved his grid position by a row, right?

We went into this race with unknown levels of World Championship Suspense. That’s all gone now.

Petratti had to start from Pit Lane because he parked on a Warm Up lap to ponder life, causing a Red Flag.

It took all the way to the first turn of the race for chaos to erupt. Bikes went sliding along with their ragdoll-riders. Turned out that Gonzalez (Manuel) turned kamikaze pilot, sweeping Steven from behind. Both went sprawling across the track, miraculously not becoming roadkill.

Manuel, I’d hide post-race if I were you…

Not very long after the first Gonzalez, González Number Two buried his bike in the dirt like a dog does a bone. Somewhere around the same time Rodriguez also left the stage.

By Lap Twelve De Rosa’s bike morphed into a mule; the Spaniard was forced to push it back to the pits, and out of the race.

Six laps to go Odendaal again crashed; this time without anyone else’s assistance. He was simply riding on the knife’s edge, trying to salvage what he could, and toppled over said edge. Ten out of ten for the Dust Cloud Award, at least.

Tuuli raced like a boss, only to pull a Casper and vanish on the final lap.
It was Cluzel once again claiming the victory, but this time Oncu kept him honest for the full length of the race. Oncu was happy with another second, and Aegerter took third.

Third in the race, but thanks to Manuel’s mishap it was made official: Dominique Aegerter has taken the SSP World Championship for 2021. Congratulations; you didn’t even have to take the rival out yourself this time!

Anyone packing some calming tablets? That race gave the nerves a proper workout.

Lowes had to sit Race Two out due to a ‘functional impairment’ in his injured right hand. Basically, it was buggering him up a little too much.

It was the RedRazRea Show today – what a hectic threeway war that was! The top three positions looked like socks in a tumbledryer; and colour swatches were swapped about as much, too.

By Lap Ten Redding managed to pop into the lead, and stay there. From then onwards, Redding pulled a Toprak and disappeared into the distant haze.

Behind him, Toprak and Rea kept swapping those paint samples. On more than one occasion eyes were averted in fear of witnessing a spectacular crash. It didn’t happen.

By the end of the excitement, Redding took his win – and was Extremely Happy about it. Behind him Rea managed to keep Rashgatlegogoo at bay, taking second place ahead of Toprak, who had to be happy with the third podium step.

Post-win, Redding went about his ceremonial souvenir-strip show. He tossed his boots up into the crowd, which showed just how desperate some fans are for memorabilia. Those twenty-one-lap-worn boots can’t smell daisy fresh…

Now we wait about a month for the 2021 WorldSBK grand finale.

It’s going to be epic.