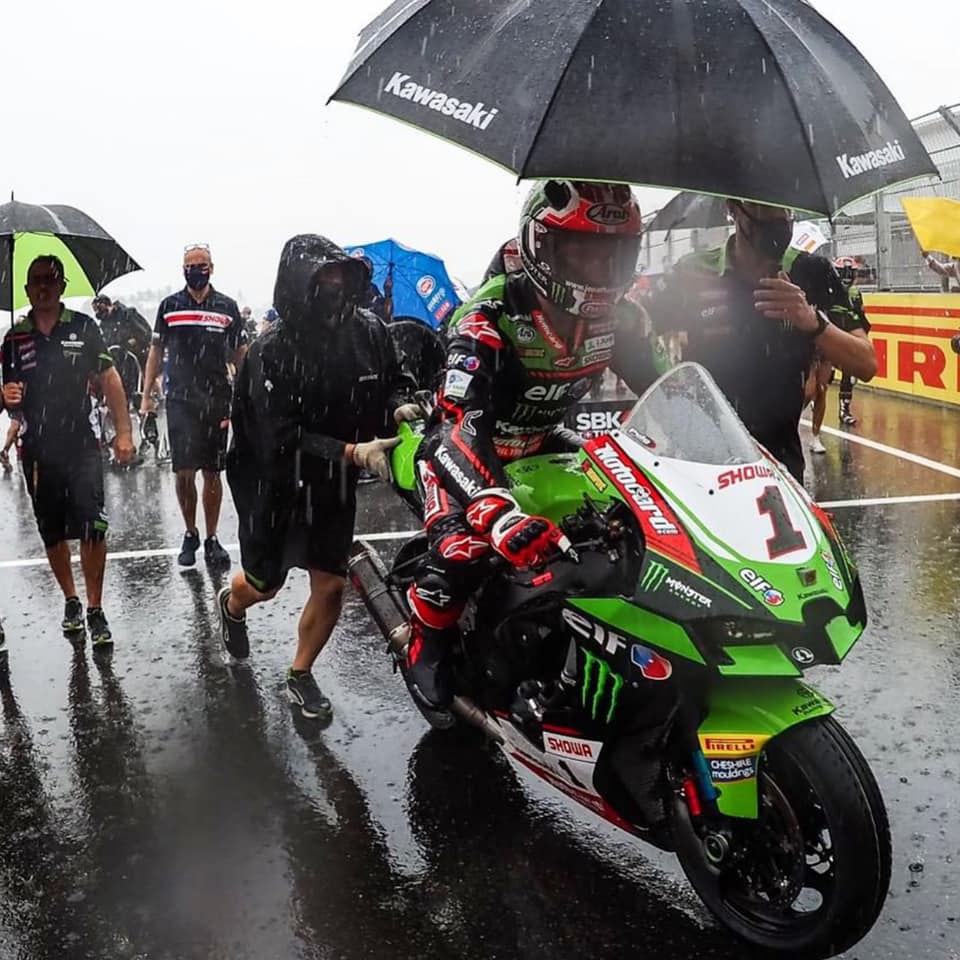 It really is a beautiful location they’ve planted a circuit in. Anyone fancy a holiday to Central Lombok District?

I bet you at least half of the locals who were there to watch the racing left for home – in the tropical downpour – on their motorcycles. And most probably made it there safely.

I can’t think of anything to add here – so let’s get to the races. Or race…

Drops of rain were reported at the start of the Warm-Up lap. Were we going to see some frantic tyre-swapping later?

The race kicked off, and a few turns into the first lap Öncü got friendly with De Rosa’s rear – luckily it was only clashy, no crashy.

Four laps into the race it seemed like the rain was indeed going to join in on the action, and by the end of the lap Hendra Pratama and Bergman called in at their pits for rain boots.

Everything dried out, the two rain-boot-shod fellas quietly cursed their luck, and racing kicked off in fantastical style.

One of few fallers this weekend was Takala, who – in an impressive fan of gravel at the final turn – went flailing off-track next to his rock-skipping bike. This all happened because his Yamaha spotted a sexy scoot next to the track, and decided to shake its tailfeathers in an attempt to impress.

Nine out of ten for the gravel-fan.

Two out of ten for the tail-shaking.

Somehow, he managed to get back into the race, but later had to call it a day and slink quietly into the pits.

He was joined in the slink-of-self-pitying-shame by the rain-boot doublet Pratama and Bergman.

Tuuli’s bike caught a cold on the twelfth lap, and straight up stopped doing the fast thing.

Three laps from the finish line Aegerter had managed to torpedo his way up into second, obliterating De Rosa’s lead gap. Was I the only one cheering for Raffaele here?

All final laps should be this nerve-wrecking. De Rosa had an Aegerter-fly buzzing about his behind, which forced him to throw everything he could into the last few corners.

Some chewed fingernails later, De Rosa crossed the line ahead of Aegerter, a very fist-pumping-happy guy. He had taken his first ever SSP race victory; and he’d worked for it. Finally. Much deserved.

He tried his bestest, but De Rosa failed to hide the tears of triumphant joy post-race.

A few bikes later, Odendaal came past the flag – in sixth – and officially locked his second place in the Championship. Well done Stevo!

The race that almost happened – then turned into a swimming pool.

Seeing Cluzel in his swim trunks, chatting with Toprak before the SBK okes set off on their outlaps, should’ve been some kind of prediction; a warning if you will. Those makeshift splash pools behind the pits were soon to be made obsolete.

It had begun raining well before the grid started to line up. Most of the field were either just settling into their positions, or somewhere on the circuit when the level of Wetness went from three to ten very quickly. It was a proper whiteout, but with unfrozen water.

A rat could barely make out its own tail, never mind a rider seeing whether he was still heading around the track, or AROUND the track…

Red flags appeared amidst the haze; the race had been delayed. Everyone made their way to their respective pits, in varying manners – and varying levels of haste.

Toprak must’ve thought it was a race, as he was back in the pits like a bullet. Or he’s not fond of water. Either or.

Compressed air is one of the most versatile tools you can have – it works a treat when you have a rain-drenched rider as well as his bike to dry off.
The Safety Cars were redubbed the Coast Guard.

Toprak felt Cluzel didn’t have enough water to wash his hair in the rain, so he lent a hand with his water bottle. What a nice guy.

It was ten minutes past the original race-start, and the skybuckets kept tossing wetness at the Mandalikan circuit with effervescent energy. It was decided that the new schedule would be announced after four p.m. Indonesian time.

They were late. But, it was then announced that the SBK Race One will be held on Sunday. Hopefully the heavens above don’t feel like playing river-boats on the track again.

The championship fight rolls over to the last day.